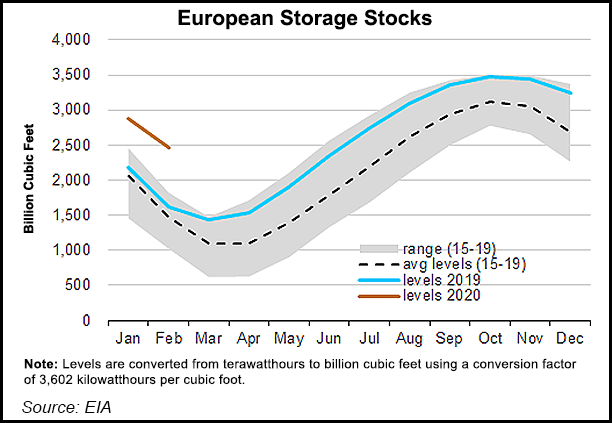 While the project has yet to be sanctioned, analysts now expect a final investment decision (FID) later in the year rather than earlier as competition for supply agreements remains strong and weak global prices are clouding the outlook for new projects.

If Tellurian seals a previously announced deal with India’s state-owned Petronet it would have only 4 million metric tons per year (mmty) of LNG left to sell. If construction starts this year as planned, the company expects first LNG by 2023.

The global gas market continues to look weak as abundant supplies are met with demand destruction from the coronavirus outbreak, which has shown signs of intensifying in recent days as Iran, Italy, Japan and South Korea have all reported an escalation in reported cases, raising the risks of a global pandemic that’s sent renewed jitters through financial markets.

Gas demand in China, a leading buyer, has taken a hit because of the outbreak, while travel and economic restrictions have also created problems in unloading cargoes and led to diversions and more floating storage.

There were 16 vessels floating on Monday, with nine in the Far East, three in Europe, one in Australia, another in the Persian Gulf and two offshore India, according to data intelligence firm Kpler. Meanwhile, ClipperData said 13 vessels have discharged in China over the last seven days, down from 15 at the same time last year.

Japan and South Korea are also among the world’s top gas buyers.

Spot LNG prices in both Europe and North Asia remain below $3.00/MMBtu. LNG has also been trading at a discount to European gas benchmarks in yet another sign of the global glut.

While prompt prices in Europe could get a lift as colder weather is forecast for the first half of March, they again turned lower on Monday following a volatile week on the continent. High winds across Europe created unloading difficulties last week that helped to prop up prices, but berthing limitations were seen lifting over the weekend as LNG sendout from import terminals was set to move higher with more cargoes unloading.

Gas storage inventories are also high. The U.S. Energy Information Administration (EIA) noted last week that European storage levels are 48% higher than the five-year average for February due to a warm winter and increasing LNG imports. Europe has served as a dumping ground for the fuel given demand, regasification infrastructure and the wholesale market there. EIA also noted that from April through November 2019, 55% of U.S. LNG exports went to the continent.

If the global gas market remains weak and Europe’s storage inventories are so high that it can’t take in additional gas during the shoulder season, U.S. terminals could shut in later this year, but what that looks like remains unclear.

The outlook dimmed last week after Spanish utility Naturgy reportedly canceled two cargoes it was set to lift in April from Cheniere Energy Inc. While the company didn’t specifically address the cancellation, Cheniere said its flexible contracts will help insulate it from a downturn in the market.

“The fixed-fee component of our SPAs ensures stable, reliable cash flow to Cheniere, even in a scenario where a customer elects to suspend a delivery,” Cheniere said, referring to its sales purchase agreements, which it added are “highly” valued by global customers. The take-or-pay contracts generally allow buyers to cancel cargoes within a two month window.

If U.S. exports are curtailed later in the year, it’s more likely that maintenance outages could last longer or a couple trains could be shut in rather than entire terminals, said Nathalie Leconte, an LNG analyst at Kpler.

The maximum Gulf Coast LNG netback for April between the Japan Korea Marker, National Balancing Point and Title Transfer Facility on Monday was $2.274/MMBtu, or just $0.431 above where Henry Hub futures settled, according to NGI data.

U.S. exports declined for the week ending Feb. 19 as fourteen vessels, including seven from Sabine Pass, three from Corpus Christi, two from Freeport and one each from Cameron and Cove Point departed carrying 49 Bcf. That compares to 15 vessels that carried 55 Bcf in the prior week.

Genscape Inc. noted Feb. 19 that foggy weather along the Gulf Coast curbed feed gas deliveries over the previous 10 days. Facility maintenance this month has also impacted flows to some terminals, which recently dropped below 7 Bcf/d. They’ve since returned to highs above 9 Bcf/d, according to NGI’s U.S. LNG Export tracker.

Royal Dutch Shell plc said during its annual LNG outlook last week that market dynamics aren’t likely to change in a way that will reduce global gas supplies anytime soon. Shell, the world’s largest trader of the super-chilled fuel, is forecasting that global LNG demand will double to 700 mmt by 2040, but it doesn’t see balance returning to the market until the mid-2020s.