Natural gas futures on Wednesday gained ground for the third time in four sessions amid steady demand for U.S. liquefied natural gas (LNG) and concern about delayed export deliveries after a huge container ship was grounded in the Suez Canal. 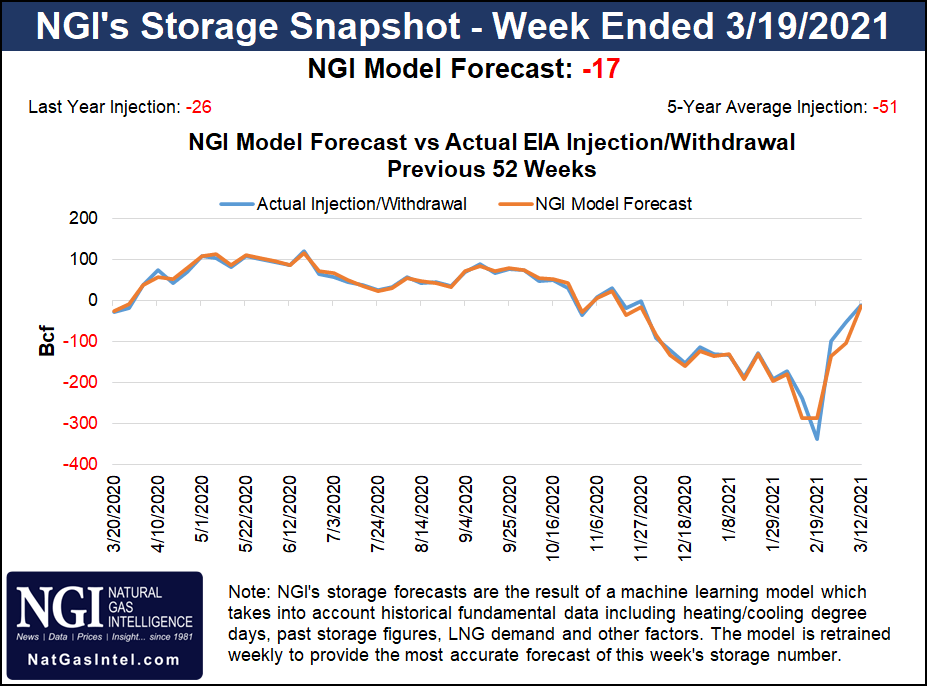 The April Nymex contract climbed 1.0 cent day/day and settled at $2.518/MMBtu. May followed suit, advancing 1.4 cents to $2.568. Each had tumbled a day earlier after a two-day winning streak.

Strong European and Asian demand for U.S. exports has kept LNG feed gas volumes near or above 11 Bcf/d throughout most of March. Volumes held near 11.5 Bcf on Wednesday, according to NGI data, not far from the record levels reached late last week, when exports approached 12 Bcf.

“LNG is strengthening to an extent that may see more Atlantic cargoes flow east,” providing “reason for optimism,” shipbroker Fearnleys AS said.

Additionally, following news late Tuesday of the grounded ship in Egypt’s Suez Canal, data intelligence firm Kpler said tankers were backing up, and an estimated 15 LNG vessels with planned transits would likely be affected. Some delayed LNG vessels were destined for Europe and others for Asia. The potential for delays could put upward pressure on prices, analysts said.

LNG demand has proven a vital offset to weakening domestic needs for natural gas to heat homes and businesses as the spring shoulder season quickly approaches.

While chilly rains and regional bouts of cold are in the offing over the next two weeks, Bespoke Weather Services said Wednesday mild weather will prevail across most of the Lower 48 the rest of this month and into early April.

“Given the weakness that remains in terms of the supply/demand balance, we can see risk ultimately toward lower prices,” the forecaster added. “A weak” Energy Information Administration (EIA) storage report “would increase the risk of a break lower, given a weak demand picture in the foreseeable future.”

For Thursday’s EIA storage report, median estimates clustered around the low to mid-20s. Preliminary forecasts showed increasing expectations that this week’s report could be the final draw from stockpiles of the season.

NGI modeled a 17 Bcf withdrawal for the upcoming EIA report, which covers the week ended March 19. That would compare with a 26 Bcf pull in the year-ago period and a five-year average withdrawal of 51 Bcf.

The median of a Bloomberg survey showed a withdrawal of 21 Bcf, with responses ranging from draws of 14 Bcf to 33 Bcf.

The EIA is scheduled to release the latest storage data at 10:30 a.m. ET Thursday.

On the pandemic front, the U.S. Centers for Disease Control and Prevention said this week one out of four Americans had received at least one dose of a coronavirus vaccine, with an average of 2.5 million doses administered daily over the past week. At that pace, the country is on track for widespread inoculation by summer. This could pave a path for greater economic activity as well as increased energy demand from the commercial and industrial sectors.

Analysts are worried, however, about a recent rash of outbreaks and new business restrictions in Europe. “We submit that extended lockdowns in Europe pose delay risks to expectations for a strong demand rebound into the summer months,” said analysts at Tudor, Pickering, Holt & Co.

Few catalysts lie ahead the rest of the week on that front, NatGasWeather said. The firm sees a “messy pattern the next few days as numerous weather systems bring showers and thunderstorms, including snow to the Rockies. However, these systems are rather mild with highs of 40s to 60s.”

The southern half of the country, meanwhile, “will remain comfortable with highs of 60s to 80s, while the Ohio Valley and Northeast will be warmer than normal with highs of 50s and 60s to aid light national demand.”

While next-day prices fell across most regions Wednesday, the declines were mostly modest.

Looking to next week, NatGasWeather said weather systems over the west-central United States could track across the Midwest and Northeast, “with highs of 40s to 60s for a modest bump in national demand.”

“However,” the firm added, “upper high pressure will expand to rule much of the U.S. April 3-7, with widespread comfortable highs of 60s to 80s for very light national demand.”