A massive container ship ran aground Tuesday in the Suez Canal, clogging one of the world’s most heavily trafficked shipping lanes and creating logistical hurdles for the liquefied natural gas (LNG) and oil trade, as well as for other commodities. 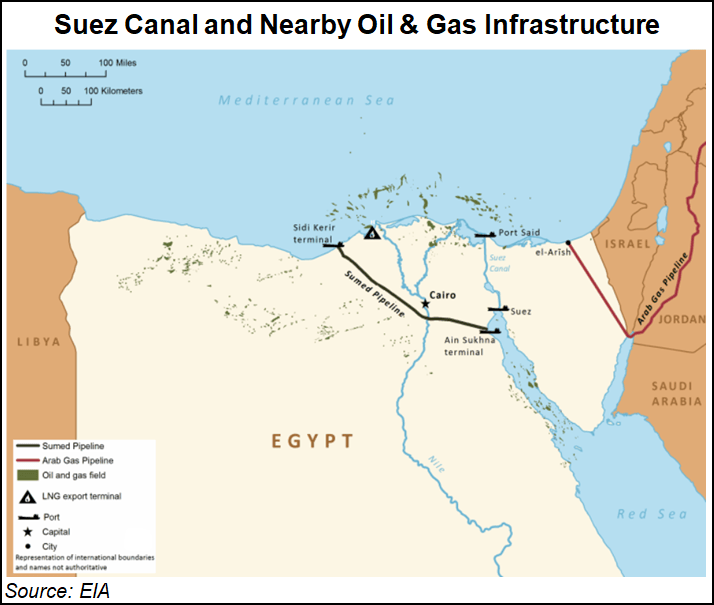 “The transit point is extremely vital,” ClipperData’s Matt Smith told NGI. Smith is director of commodity research. About 2 million b/d of crude and refined products pass through the canal, while LNG and liquefied petroleum gas cross in heavy volumes too, he said. LNG traffic in the canal has also has risen, given congestion at the Panama Canal.

About eight tug boats were working Wednesday to refloat the Ever Given, a 1,312-foot-long vessel operated by Evergreen Marine Corp. Canal officials expected vessel traffic to resume by Thursday if work goes according to plan.

On Wednesday, tankers were piling up.

Data intelligence firm Kpler said 15 LNG vessels with planned Suez transits were likely to be impacted. There were five laden LNG vessels with delayed arrivals because of the congestion, Kpler said. Of those, three were destined for Asia and two for Europe. Spot LNG prices in North Asia spiked Wednesday on reports of the ship running aground. Prompt Brent crude oil futures also closed higher on the possibility of a short-term supply squeeze.

Six of the 10 vessels waiting to transit the Suez by the end of the week southbound toward the Middle East belong to Qatargas, according to Kpler. The vessels were empty as they made their way to Qatar. Kpler analysts said they expected loading delays at the Ras Laffan terminal in Qatar in early April if congestion were to persist.

The Suez Canal runs north to south across the Isthmus of Suez in Egypt to connect the Mediterranean and Red seas. The waterway separates Africa from Asia and provides the quickest maritime route between Europe and lands around the Indian and western Pacific oceans. Most oil makes its way west from the Middle East, while refined products move south through the canal toward Asia.