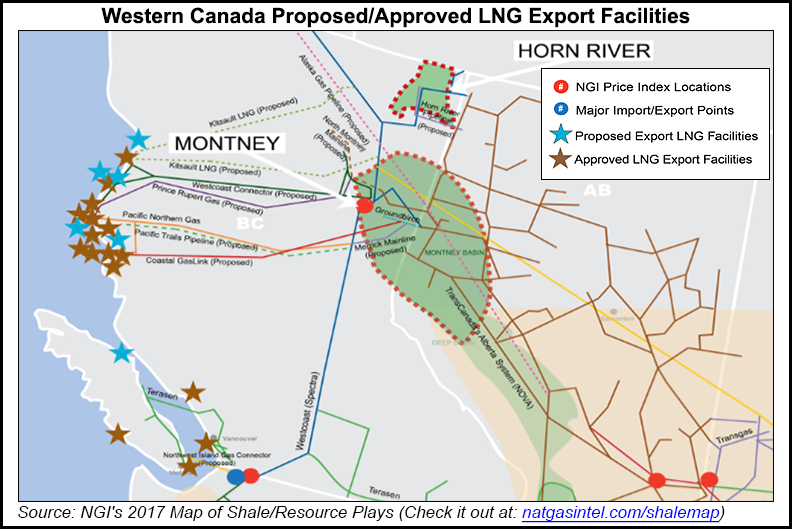 The consortium aims to launch work on the British Columbia (BC) marine terminal, and associated pipeline and production development, well before the post-2020 date that even the most optimistic analysts predict for a Canadian entry into the overseas gas trade.

Although market, price and cost uncertainties foiled plans for the FID, Dakers described the hesitation as temporary and said about 100 specialists are still employed on whipping the scheme into economic shape.

The exercise has advanced into a call for bids on a mammoth engineering, procurement and construction (EPC) contract for the entire project, Dakers added during an annual state-of-the-industry conference held by the Canadian Energy Research Institute (CERI).

When asked when the go-ahead decision will be made Dakers said, “The short answer is when we’re ready. We still have to drive down costs. The [EPC] contracting market is aware of that.”

Dakers said, “We hope to be much earlier” than the 2020s timing for a start on northern Pacific coast export terminals forecast by even the most bullish analyst at the CERI event, Wood Mackenzie Canadian research manager Mark Oberstoetter.

“No doubt there are competitive challenges,” Dakers said. But he reported that the LNG Canada crew is making “significant progress” at chipping away formidable northern BC cost barriers described by wary observers such as University of Alberta engineering professor Amit Kumar and Deloitte Canada oil and gas partner Geoffrey Cann.

The skeptics’ estimates that northern BC production, pipeline and terminal networks would require gas prices of US$16-18/MMBtu to break even can be partly countered with economies of scale that spread costs thin over big output volumes, said Dakers.

The LNG Canada jumbo Kitimat terminal’s capacity would be matched by its supply line from northern BC shale deposits, the Coastal Gas Link project that TransCanada Corp. plans to build with 48-inch-diameter pipe capable of delivering 4 Bcf/d, said Dakers.

The consortium adds a commercial advantage over rival LNG projects, he said. “This approach makes the customer an integral part of developing the project.”

The Asian partners also hold positions in BC shale gas drilling programs. The LNG Canada structure makes the terminal a service for production owned by the consortium members from wells to consumers’ burner tips. The partners tailor separate financial, commercial and tax arrangements to suit to their own market and political environments.

As a further sweetener, the pipeline side of LNG Canada includes a link to TransCanada’s BC and Alberta supply collection grid, Nova Gas Transmission Ltd., where prices are as much as US$1.00/MMbtu lower than at the Henry Hub, said Dakers.

Canadian advantages also include short shipping distances to Asia — half the voyages sailed by U.S. LNG from the Gulf of Mexico coast terminals — and gas supply security, he said.

LNG Canada holds a 40-year license from the National Energy Board to export 57 Tcf.

“We see a promising outlook for gas demand in the Asia-Pacific region,” said Tam, a former staffer of the International Energy Agency. APERC predicts growth served by Pacific LNG tanker traffic will stay strong through the next quarter-century, with China leading the new buying until 2030 followed by developing economies in Malaysia, Vietnam, Philippines, Indonesia and Chile.