Feed gas deliveries to U.S. liquefied natural gas (LNG) export terminals that are running at or near peak capacity have grabbed headlines since colder weather settled in across the Northern Hemisphere in recent weeks. But what does it mean for an LNG plant to run at peak capacity? 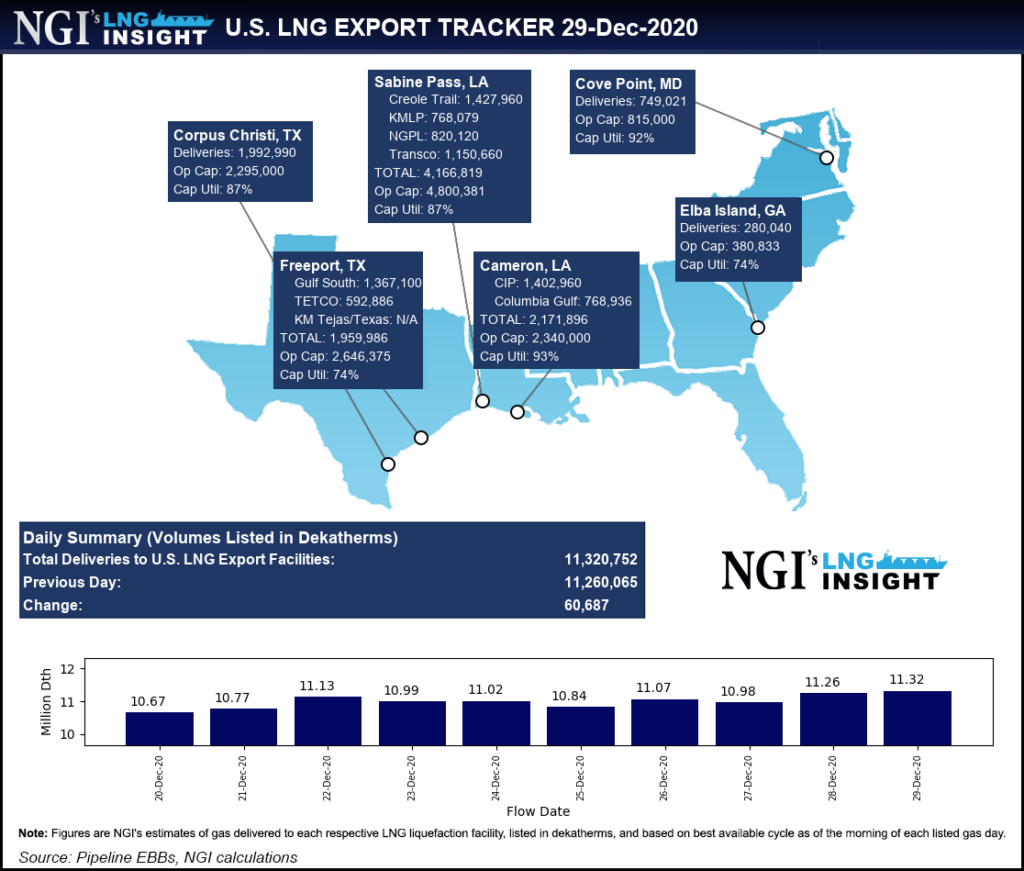 Never before have so many liquefaction trains been in operation in the United States. The first LNG export cargo left the Lower 48 in 2016. Now, there are 24 trains in service at six terminals in Georgia, Louisiana, Maryland and Texas, while another is being commissioned.

Asian natural gas prices have hit levels not seen in years, and European prices are also strong. U.S. liquefaction trains are working overtime as American cargoes are moving toward big premiums overseas and helping to recover some of this summer’s losses, when prices fell amid lackluster demand.

The moment offers an opportunity to examine the differences between a liquefaction terminal’s baseload, nameplate and peak capacities. Not counting the third train at Cheniere Energy Inc.’s Corpus Christi facility in South Texas, which is currently being commissioned, U.S. trains currently have a baseload capacity of about 10.29 Bcf/d and a peak capacity of 11.59 Bcf/d.

So what’s the difference? Export terminals have essentially pre-sold LNG under long-term supply contracts with their customers that define how much of the super-chilled fuel is to be produced. The contracts lay out an annual delivery plan (ADP) that schedules LNG production well in advance of offtake. Nominal capacity, or baseload capacity, is the production required to satisfy existing sales contracts on an annualized basis.

“That baseload production capacity represents a high utilization of the plant, but still a utilization that can comfortably be met even if some hiccups may occur as well as planned maintenance,” one project executive told NGI.

There are, of course, contractual terms that allow modifications to the ADP, and LNG producers are able to more specifically develop near-term delivery plans to keep the process of production, storage and offtake running smoothly.

Given the current strength of the global gas market, feed gas deliveries to U.S. terminals have been flowing at 11 Bcf/d or higher throughout much of December, suggesting trains are running at or near peak capacity. When LNG prices are high and a liquefier has the sales rights to surplus capacity, they can ramp production and deliver extra cargoes into the spot market, running their facility at peak capacity, or the maximum a plant can produce in a given period of time.

Beyond a commercial perspective, it’s also common to hear about a plant’s nameplate capacity. This is essentially the capacity guaranteed by an engineering contractor or technology licenser. It’s typically defined in million tonnes per annum or million metric tons per year (mmty). But plants don’t run at 100% of their guaranteed capacity every day, assuming market conditions, maintenance and other operational issues. Taking those factors into account, annual delivered volumes are typically about 90% of nameplate capacity.

Operators can also learn more about their plants, particularly early in the life-cycle, to better understand the limitations of peak capacity and even options to improve it. Moreover, every few years, LNG trains are shut down for major maintenance work, often called an overhaul, which can help boost performance.

Cheniere, the largest U.S. LNG exporter, recently said its trains would run more often thanks to gains in operational expertise and maintenance optimization, among other things. The increased run rate has added another 7 mmty that the company can market from its Corpus Christi and Sabine Pass terminals, or roughly the equivalent of another train.