Anadarko Petroleum Corp. plans to spend 60% of its 2014 capital budget — $8.1-8.5 billion — in the U.S. onshore, particularly the No. 1 asset, Colorado’s Wattenberg field, the company said Tuesday. 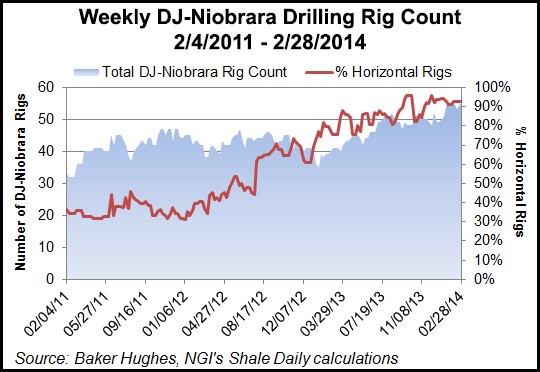 The Wattenberg horizontal drilling remains the No. 1 target for the entire company, said the CEO.

“The Wattenberg horizontal program generates the strongest returns in Anadarko’s U.S. onshore portfolio and is expected to achieve significant growth in 2014,” with infrastructure expansions and a concentrated acreage position, he said. Expansions coming online this year include the 300 MMcf/d Lancaster cryogenic plant and the 150,000 b/d Front Range natural gas liquids pipeline, both now being commissioned.

Thirteen rigs on average are scheduled to operate in Wattenberg this year, with more than 360 wells planned. At the end of February, there was a total of 55 rigs operating in the entire DJ-Niobrara, which overlays the Wattenburg, according to Baker Hughes data.

Expanded Anadarko drilling programs also are planned for the Eagle Ford Shale in South Texas, the Wolfcamp formation in the Permian Basin and for the gas-rich Haynesville Shale in East Texas/North Louisiana.

“Our 2014 capital program is again a prudent and disciplined approach that is within anticipated cash flow,” Walker said. About 30% of capital spending would go to international and deepwater operations, and 10% is for midstream and other projects.

Anadarko achieved record U.S. onshore sales volumes in 4Q2013 of 609,000 boe/d, including better-than-expected oil output from the Wattenberg field and the Eagle Ford, along with more gas growth in the Haynesville (see Shale Daily, Feb. 4). Little mention was made Tuesday of projections for the Marcellus Shale. Before the effects of price revisions, Anadarko achieved a 194% reserve replacement ratio in 2013 from 2012.

In the oily Wolfcamp, Anadarko has evaluated only about one-fifth of its 600,000-acre (gross) position. More than 1,000 drilling locations have been identified in the derisked area. Eight to 10 rigs are scheduled to be drilling more than 80 wells for the year.

Anadarko also has become one of the leading explorers in the U.S. deepwater Gulf of Mexico (GOM), a trend expected to grow this year, said the CEO. First oil is expected from the Lucius development in the the second half of 2013, a facility designed to deliver up to 80,000 b/d. The Heidelberg development is ongoing, with spar construction more than 75% complete and first oil slated for 2016.

“During 2014, Anadarko expects to drill up to 25 high-potential deepwater exploration/appraisal wells,” Walker said. The GOM exploration/appraisal program is focused on building on success achieved in the Shenandoah Basin in 2013, which is emerging as one of the largest oil accumulations ever discovered in the U.S. offshore Appraisal activity at the Coronado, Yucatan and Shenandoah discoveries in the basin highlight a six-to-eight-well program this year.