Latin America’s oil and gas producing countries are returning to pre-coronavirus levels of activity after a year of uncertainty and disruption. 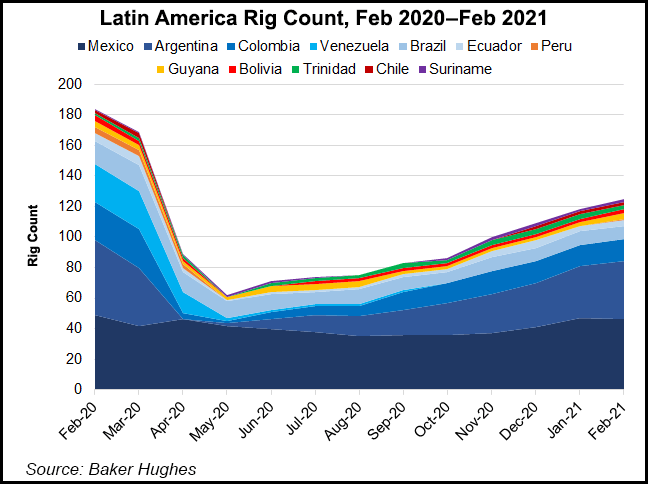 Last February, just before the coronavirus reached the region, 184 oil and gas rigs were active across Latin America, according to information from oilfield services provider Baker Hughes Co. Drilling activity dipped, then plunged, hitting 169 in March, 89 in April, and 62 in May.

Even as the virus continues to ravage the region, the Latin American rig count has inched up each month since then, reaching 125 in February. Argentina, Guyana and Mexico are back to pre-coronavirus levels, while Brazil and Colombia are still slightly off.

Venezuela had 25 rigs running in February 2020 and last month had zero. However, the region’s only member of the Organization of Petroleum Exporting Countries (OPEC), Venezuela, has seen a decline in its oil and gas sector that long predates the coronavirus.

In its latest monthly report, OPEC predicted that other countries not members of the cartel in Latin America — in other words, every country except for Venezuela — would be a leader globally in additional output this year.

Globally, researchers see Canada, the United States, Norway and Brazil as the main drivers of non-OPEC supply growth for 2021.

After declining by 10,000 b/d last year, OPEC sees Mexico’s liquids production remaining flat at 1.92 million b/d, helped by the start-up of the first phase of production at the Pokoch and Ichalkil shallow water fields.

For 2021, oil production in Brazil, Ecuador, Guyana, Argentina and Peru is forecast to increase, owing to production ramp-ups in fields that started in 2019 and 2020. Production in Ecuador is projected to recover by 6,000 b/d from outages seen in 2020, to average 550,000 b/d. Oil production is likely only to decline in Colombia, by 10,000 b/d, according to OPEC.

At Brazil’s Petróleo Brasileiro SA (Petrobras), lifting costs are falling dramatically in the deepwater pre-salt region making Brazilian oil among the most competitive in the world.

Chief strategy officer Rafael Santos said recently that Petrobras is looking at lifting costs of under $4/bbl oil in the pre-salt, thanks to “knowledge and experience” and cutting-edge technology. The company has a goal of getting oil to market 1,000 days after it is found.

Petrobras supplies about 3% of the world’s total oil demand, or about 2.3 million b/d, making Brazil the biggest oil producing country in Latin America. This year, Petrobras is to start to produce oil from Sepia and Mero I in the pre-salt, each capable of 180,000 b/d at peak capacity.

Analysts at Rystad Energy said that oil and gas demand recovery, supported by vaccination efforts and supply cuts by OPEC and its allies, is “proving good for drilling activity.” Rystad expects around 54,000 wells to be drilled worldwide in 2021, a 12% increase from 2020 levels. In 2022, drilling is set to increase even more, by another 19% year/year to about 64,500 wells, but still short of the 73,000 wells drilled in 2019.

Offshore drilling is set to fare better than onshore, with Latin American nations Brazil, Guyana and Mexico leading the way.

“In contrast to previous years, when the North American shale sector led production growth, we expect the onshore and offshore shelf in the Middle East and the deepwater market in South America to be the main drivers of growth going forward,” said Rystad researcher Daniel Holmedal.

There are also to be investments in the region’s unconventional plays this year. Argentina’s state oil company YPF SA plans to spend $1.5 billion to boost oil and gas production in 2021 in Neuquén province, home to the giant Vaca Muerta shale deposit. The company plans to up overall capital expenditure (capex) by 70% in 2021 to $2.7 billion, 80% of which would go to the upstream.

Meanwhile Colombia’s state oil company Ecopetrol SA also plans to continue its foray into unconventional plays in 2021, principally in the prolific Permian Basin in the United States. However, it also is working a pilot program at home.

Ecopetrol plans to spend more than $600 million in shale basins this year, part of an overall capex plan of $3.5-4 billion for 2021.