The U.S. Energy Information Administration (EIA) and the Organization of the Petroleum Exporting Countries (OPEC) have reduced their outlooks for global oil production this year as Covid-19 poses the potential to further suppress demand and pricing. 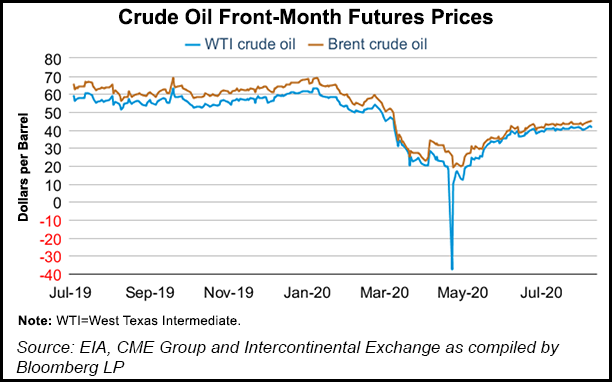 In the monthly Short-Term Energy Outlook (STEO) issued on Tuesday, EIA researchers estimated U.S. oil output this year would average 11.3 million b/d, down by 370,000 b/d from a forecast issued only one month ago. In 2019, domestic oil production averaged 12.2 million b/d. Production in 2021 is now forecast to be around 11.1 million b/d.

The EIA forecast preceded the Monthly Oil Market Report issued on Wednesday by the Organization of the Petroleum Exporting Countries (OPEC). OPEC sees global demand declining by 9.1 million b/d this year, extending a decrease by 100,000, “due mainly to lower economic activity levels in developing countries.”

Demand in 2021 is expected to rise by 7 million b/d, according to OPEC, unchanged from the July forecast.

OPEC revised higher the liquids supply forecast from countries that are not members of the cartel, which include the United States. Researchers expect output in non-OPEC countries to be around 235,000 b/d higher because of a “better-than-expected recovery in the second half, leaving output on track for a 3.03 million b/d decline year/year.”

Because of the coronavirus impact, OPEC now sees global economic growth this year falling by 4%, compared to July’s forecast of a 3.7% decline.

“The recovery in 2021 is forecast to reach 4.7%, unchanged from the previous month,” said OPEC’s researchers. “The U.S. is revised down slightly and now forecast to contract by 5.3% in 2020, followed by growth of 4.1% in 2021.”
The “uncertainty surrounding financial and logistical constraints for U.S. production, as well as a potential second wave of Covid-19 infections globally, remains a concern,” said the cartel’s researchers.

OPEC-plus “discipline” and the collapse in capital spending in areas not within OPEC, i.e. the United States, are “part of the backdrop on the supply side,” analyst Pavel Molchanov said Wednesday.

More impactful to supply for “day-to-day volatility,” he said, “are the Covid-related disruptions in transportation and economic activity.” Many governments have instituted “lockdown 2.0” to cope with virus outbreaks, with some imposing stricter travel rules.

“Having been tracking economic reopening policies in 87 countries, here is the key data point: of the 4.38 billion people who have been under a lockdown at some point since January, 3.85 billion (88%) live in jurisdictions that have concluded their reopening, which we define as everything up to and including all retail and restaurants dine-in,” Molchanov said. The figure is down slightly from the 89% peak in early July, he noted.

“As problematic as the current Covid headlines are, we are more concerned about impact on demand from a ‘second wave’ this coming winter in the Northern Hemisphere,” said the Raymond James analyst. The 12-month futures strip, he noted, was at $43.04/bbl for West Texas Intermediate and $46.33/bbl for Brent, “exhibiting a nearly flat profile.”