The Industrial Energy Consumers of America (IECA) has targeted Energy Transfer LP’s request to extend the timeline of liquefied natural gas (LNG) exports from its proposed Lake Charles project as a part of what group leadership calls “a line in the sand.” 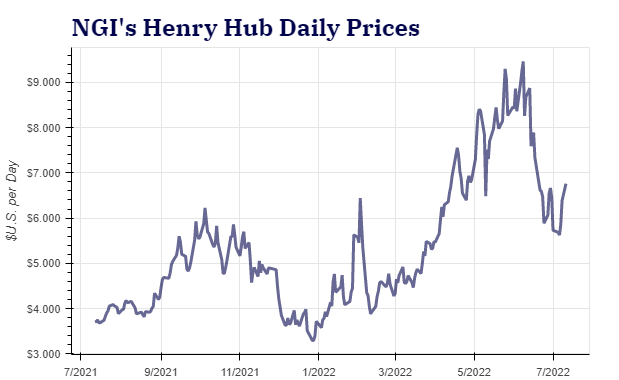 The manufacturing advocacy group has moved to intervene in Dallas-based Energy Transfer’s request to the Department of Energy (DOE) to extend export authorization until 2050. IECA, which represents over 11,700 facilities nationwide, has been arguing for years that expansions in U.S. LNG export volumes to non-free trade (non-FTA) countries drives up domestic energy prices, harming consumers.

IECA CEO Paul Cicio told NGI that the glut of approved projects in operation, under construction and still pending has reached a level the group believes is already unsustainable. In response, IECA plans to intervene in any authorization request it can, like in the case of Lake Charles LNG.

“We’ve put a stake in the ground that says no extension and no expansion of exports,” Cicio said. “The entire reliability of the natural gas and the electricity market is at stake here.”

The Department of Energy published in June Energy Tranfer’s request to extend its export authorization to non-FTA agreement countries (Docket No. 13-04-LNG and 16-109-LNG). Lake Charles LNG was previously permitted to export 24.1 Bcm/year to both FTA and non-FTA countries. IECA also intervened in the last authorization process, allowing it to comment on the request for an extension, as well.

As of June, Energy Transfer has secured 6 million metric tons/year (mmty) in offtake agreements for the possibly 16.45 mmty capacity terminal. The Southwest Louisiana project has been permitted since 2015, but has remained unsanctioned as the company works to secure contracts. Energy Transfer has netted at least five sales and purchase agreements for Lake Charles LNG this year, all with Asian firms, as competition for future volumes this year has accelerated.

Energy Transfer’s Vicki Granado told NGI the company is aiming to make a final investment decision later this year as the project continues to garner attention as the only permitted brownfield terminal on the Gulf Coast.

“Natural gas, with its lower-carbon profile, is a key energy source among countries aiming to satisfy climate change goals,” Granado told NGI. “This makes Lake Charles LNG an important asset in the U.S.’s energy infrastructure landscape for decades to come.”

The role of U.S. LNG exports in stabilizing global energy markets has been growing after Russia’s invasion of Ukraine, but IECA argues that authorizations from regulators have already overstepped the bounds set by U.S. lawmakers.
Cicio said the group believes regulators have misinterpreted provisions in the Natural Gas Act that stipulate exports to non-FTA countries can’t impede the public interest. That also includes spiking domestic natural gas prices as state-owned enterprises and utilities compete with U.S. manufacturers for supplies, Cicio said.

“The DOE has approved LNG export volumes equal to about 80% of net 2021 production,” Cicio said. “It cannot be possible that excessive exports of that nature are in the public interest.”

LNG industry advocates have argued against this point, citing that domestic natural gas demand from exporters has typically hovered around 10% of overall demand. Still, IECA’s comments in its motion to DOE insist regulators have created the potential for a supply shortfall.

IECA has also attributed record Henry Hub prices to the influx of demand from Europe and Asia during the tight global market. Henry Hub reached $9.28/MMBtu on June 7, a 13-year record the group says aligns with an increase in LNG exports.

In the aftermath of the explosion at Freeport LNG in South Texas, domestic natural gas prices dropped as prospects for domestic supply suddenly grew. Huntsman Corp.’s Peter Huntsman, CEO, told NGI last month the event was a clear example that natural gas production needed to grow in order to meet both domestic and international demand.

In a note, analysts with Goldman Sachs Commodity Research wrote that Henry Hub prices could shift “significantly lower” in the next two years compared to current levels. Estimated growth in production combined with limited increases in LNG exports are expected to lead to “much softer U.S. balances,” the analysts wrote.

However, the analysts wrote high energy prices were still expected to take their toll through the rest of the year, ”holding back” domestic and global economic growth.