Framed around projections that U.S. consumers could be hit with higher heating bills this year, advocacy groups are renewing the message that expanding U.S. liquefied natural gas (LNG) exports are part of the problem. 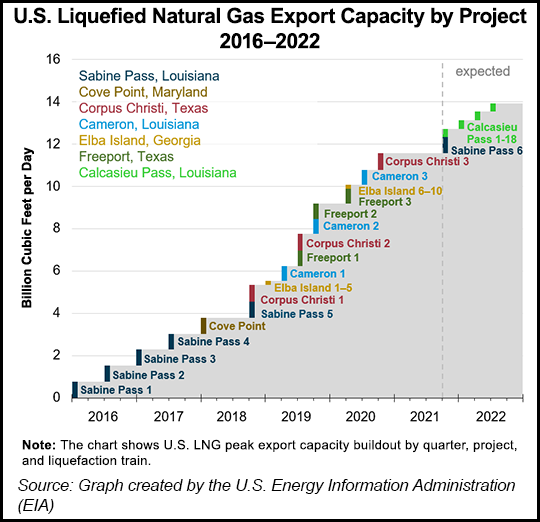 The nonprofit Institute for Energy Economics and Financial Analysis (IEEFA) is highlighting natural gas price fluctuations from last year in a new analysis exploring whether exports are exposing average Americans to higher prices. IEEFA researches options and advocates for an acceleration in the transition of the U.S. energy economy.

IEEFA’s Clark Williams-Derry, energy finance analyst, said the Henry Hub natural gas price spikes last year showed how gas exports will “bite” consumers, even when domestic production is up and consumption is down.

“LNG exports just about doubled from 2019 to 2021, and that is what created the supply tightness in the market that has lifted prices and made U.S. consumers pay higher prices for natural gas and, as a consequence, electricity,” Williams-Derry said.

LNG exports during the first 10 months of last year outpaced the previous year by 30%. Williams-Derry pointed to Henry Hub spot prices averaging $3.91/MMBtu in 2021 as evidence of problems to come.

IEEFA has estimated that 10-15% of U.S. gas production capacity is dedicated to LNG exports. The share of exported gas could increase to above 45% if every terminal in the lengthy queue already approved by FERC is sanctioned, according to IEEFA.

During 1Q2021, No. 1 LNG exporter Cheniere Energy Inc. logged what at the time were record exports from its Gulf Coast terminals, shipping 133 cargoes totaling 480 trillion Btu, amid a jump in global demand. The spike came despite Uri’s impact on Cheniere’s operations. The storm disrupted operations at other U.S. terminals as well.

The U.S. LNG industry has rejected the idea that limiting exports will guarantee stable domestic prices. Department of Energy officials also recently reiterated that the Biden administration is unlikely to significantly limit exports, especially as European allies handle supply pressure for Russia and tensions in Ukraine.

Executive Director Charlie Riedl of the Center for LNG said handcuffing exports could risk depressing incentives for U.S. production and damage the nation’s reputation as a reliable supplier.

Trade group LNG Allies published updated information this week about export capacities and domestic natural gas production in an effort to refute the argument that completing more projects would lead to higher prices.

Only two projects, both in Louisiana, Venture Global Inc.’s Calcasieu Pass LNG and the sixth train at Sempra’s Sabine Pass LNG, are expected to come online in 2022. But once those projects come online, the EIA also estimates that the United States would have the most LNG export capacity available in the world.

U.S. exports are estimated by the EIA to rise around 3 Bcf/d in the next year to an average of 12.1 Bcf/d in 2023. U.S. LNG capacity, and growth in supplies across the world, is still expected to lag behind international demand within the next three to five years and keep the market tight.

President Paul N. Cicio of the nonprofit Industrial Energy Consumers of America (IECA) said the manufacturing advocate would continue to oppose expanding LNG export projects and deals until the approval process is reformed.

IECA has formally requested that DOE “do a review of past and present applications and evaluate whether those are in the public interest,” but it has stopped short of legal action, Cicio said.

In December, IECA formally opposed an application by Flex LNG Ltd. and Freeport LNG Development LP to ship 88 Bcf/year of natural gas from the Freeport terminal on Quintana Island in Texas.

IECA also sent formal letters to DOE Secretary Jennifer Granholm. The letters called for halting “existing, pending and pre-filing permits and approvals” for export facilities approved under the Natural Gas Act (NGA) until a full review was conducted about whether they met public interest.

The NGA requires companies importing and exporting natural gas to obtain authorization and gives additional consideration for public interest if gas would be supplied to a country without a U.S. free trade agreement.

IECA has argued it is obligated to attempt to secure stronger regulations for LNG exports because of the industry’s potential to impact electricity costs and gas feedstock supplies that impact U.S. manufacturers.

Both domestic dry gas production and LNG exports are predicted to rise into 2023. The Henry Hub has been forecast to average around $3.63/MMBtu over the next two years. A milder than average start to the winter has also helped U.S. storage levels rebalance.

There are indications U.S. electricity generation may rely less on natural gas in the future. However, Williams-Derry said volatility in the natural gas market and premiums on U.S. LNG like exporters experienced in December have the potential to exacerbate issues as more of the nation’s natural gas capacity is tied to exports.

“It comes down to a matter of supply and demand; either supply has to go up or demand has to go down for prices to stabilize,” Williams-Derry said. “The problem is, in the terms of LNG exports, all signs are pointing to demand going up, not down.”