Natural gas futures surged on Monday, as bulls seized upon forecasts for a burst of early summer heat in the heavily populated Northeast and early predictions for a relatively modest storage injection. 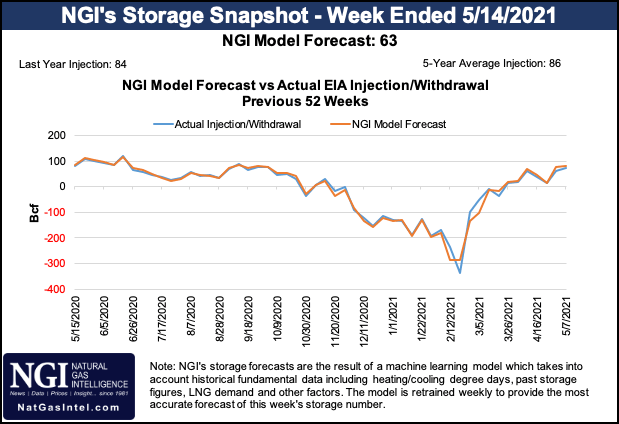 A favorable shift in the weather outlook for the next two weeks ignited the optimism in markets. Bespoke Weather Services said Monday that it added seven gas-weighted degree days to its 15-day forecast. It noted expectations for intensifying heat in the Midwest and East – with highs in the 80s and low 90s at times – following a cool start to May in those regions.

“We do still see projected angular momentum anomalies staying quite positive, but other components in the tropical forcing mix appear to set up in a more favorable position for the hotter outcome…giving us our first wave of cooling demand in much of the eastern half of the nation,” the firm added.

EBW Analytics Group said futures “could be approaching a key junction.” For the past three weeks, the front end of the curve had traded within a narrow range, failing to close above $3.00. But with the shift in weather models over the weekend, the prompt month finally got the jolt it needed.

“This hotter-than-normal weather is only expected to last for a few days and is likely to peak in the high 80s or low 90s in most locations,” EBW said. “With the underlying supply/demand fundamentals looking increasingly bullish, however, it may be sufficient to” support prices above the $3.00 threshold as long as the latest forecasts bear out.

The EBW analysts also noted that European and Asian demand for U.S. liquefied natural gas (LNG) exports is running high and expected to continue through the summer, providing a reliable complement to domestic consumption.

“During the past few weeks, developments in the global LNG market have considerably strengthened the bullish case for natural gas between now and the end of this year,” the EBW analysts said.

“Second, demand for LNG in Europe has been strengthened by cool weather, which has delayed rebuilding severely depleted European storage, and by expected increases in the price of emissions credits this fall,” the EBW analysts added.

Third, they noted, Asian prices are already surging due to “expectations for strong Chinese demand” amid “forecasts for very hot weather” as well as “potential power shortages in Japan this summer. Cumulatively, these factors increase significantly the possibility that U.S. natural gas prices will exceed $4.00 later this year.”

The result compared favorably to the five-year average build of 82 Bcf and the year earlier injection 104 Bcf.

EIA reported an injection of 60 Bcf for the final week of April. That was also bullish relative to the similar week a year earlier and the five-year average.

Looking ahead to this week’s EIA report, NGI’s model is calling for a 63 Bcf injection for the week ended May 14. Bespoke estimates an increase of 67 Bcf.

Last year, EIA recorded an 84 Bcf build for the similar week, and the five-year average is an injection of 86 Bcf.

Spot gas prices spiked on Monday along with the expectations for increased warmth.

Price jumps were pronounced throughout the country.

NatGasWeather said conditions early this week could prove choppy, as “a messy pattern” triggers areas of showers and thunderstorms, heaviest over Texas, the South and Northwest.”

High temperatures could range from the comfortable 60s in parts of the northern United States to the 90s in southern reaches, the firm said. By the weekend, however, national demand will increase notably “as very warm highs of 80s to 90s sets up over the eastern half of the U.S.”

Next week, the forecaster said, temperatures are likely to moderate in the northern U.S., with highs of 60s to 80s, but remain seasonally warm over southern regions, with highs mostly of 80s and 90s along with 100s in the Southwest deserts.