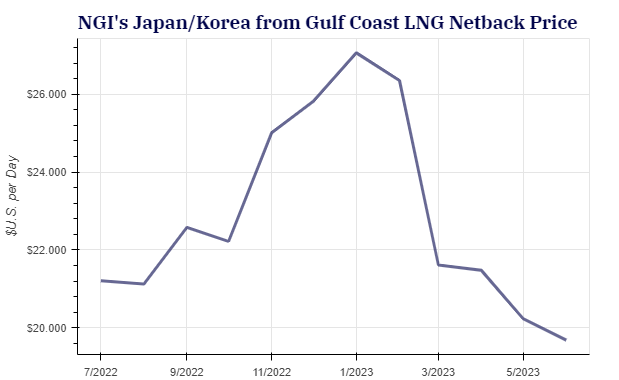 The Group of Seven (G-7), an inter-governmental political forum, has been considering ways to punish Russia following its invasion of Ukraine. The G-7 consists of Canada, France, Germany, Italy, Japan, the UK and the United States.

If all of the G-7 countries were to “take simultaneous action to ban Russian LNG imports without securing alternative sources, the world economy, including the energy industry, will be thrown into chaos,” Japan’s Koichi Hagiuda, minister of Economy, Trade and Industry, said on an online meeting of the the G-7 leaders in early May.

The volumes could be replaced with spot volumes if Russia were to cut supplies, he added.

Asian utilities in general “have moved away from purchasing spot cargoes,” Kpler senior analyst Laura Page told NGI. “But the long-term contractual volumes are continuing…Renewal of these contracts could be reevaluated when they come to expiry,” depending on the geopolitical situation. She said this happened with Taiwan’s CPC Corp. Sakhalin 2 contract. The contract expired in March and was not renewed.

Meanwhile, Japanese Prime Minister Fumio Kishida told Parliament in late May that the country is reviving idled nuclear power plants because of high LNG prices and electricity shortages in Tokyo. Japan plans to increase nuclear power generation to 22% by 2030 from 6% in 2019.

“Restarting just one existing nuclear reactor would have the same effect as supplying 1 million tons of new LNG per year to the global market,” Kishida said.

Japan does not plan to build more plants.

However, a Japanese court ruled on Tuesday (May 31) that a nuclear power plant in Hokkaido must remain offline, which could be a setback. Local utility Hokkaido Electric Power said it would “promptly” file an appeal.

Ten nuclear reactors are operational in Japan, compared with 54 before the Fukushima disaster in 2011. In 2012, Japan began to wind down its nuclear power program.