The European Union (EU) has created a framework for potentially sending more natural gas to the continent following a tentative agreement between Israel and Egypt. 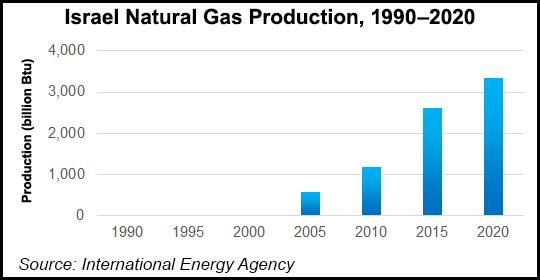 Israeli Energy Minister Karine Elharrar  said the MOU was “another step toward positioning the country as a natural gas superpower,” continuing the ramp up of production.

“The MOU will enable Israel, for the first time, to export Israeli natural gas to Europe, and it is even more impressive looking at the significant set of agreements we signed over the last year, which position Israel and the Israeli energy and water sectors as a key global player,” Elharrar said.

Israel has opened the Mediterranean Sea to exploration since 2017. Dry natural gas production has risen to 370 Bcf/d as of 2019 from 48 Bcf/year in 2012. It announced its fourth round of offshore bids at the beginning of the month.

While volumes have grown, Israel does not have large-scale export facilities. Instead, Israel has relied on its connections with Egypt, including a route through Jordan, to bring its volumes to market.

Egypt has also been working on plans to become a regional gas hub with two LNG facilities. The country has 12.2 million metric tons/year of LNG capacity that could be used to take on more Israeli gas. Israel started gas exports to Egypt last year. Since then, Israel has delivered an average of 5 billion cubic meters/year (Bcm/y) to Egypt via the Ashkelon-Arish subsea Eastern Mediterranean Gas (EMG) pipeline.

Italy’s Eni SpA has said it plans to lean on its assets and relationships in Egypt to boost gas exports to Europe. Egypt’s petroleum ministry at the end of May said the first LNG export revenues rose by 98% to almost $4 billion during the first four months of this year.

While the MOU commits the EU to importing more fossil fuel, it also reflects the partnership’s focus on meeting climate goals over the next decade. Elharrar noted the agreement highlights Europe’s need for natural gas until 2030. However, he acknowledged that fossil fuel demand is expected to decrease exponentially in the near future.

The partners agreed to include investments in decarbonizing the natural gas sector and LNG exports during the collaboration. Some investments would be directed to reducing methane emissions and exploring methods for methane capture.

The preliminary agreement includes guarantees that the exporting countries may retain volumes for domestic markets and “will not prevent Israel and Egypt from exporting natural gas to other destinations,” Elharrar said.