Toronto-based Brookfield Infrastructure Partners LP won a prolonged takeover contest for Inter Pipeline Ltd. (IPL) in Calgary today after adding an all-cash option to its bid for shareholder support and raising the total offer to about C$8.6 billion ($6.9 billion). 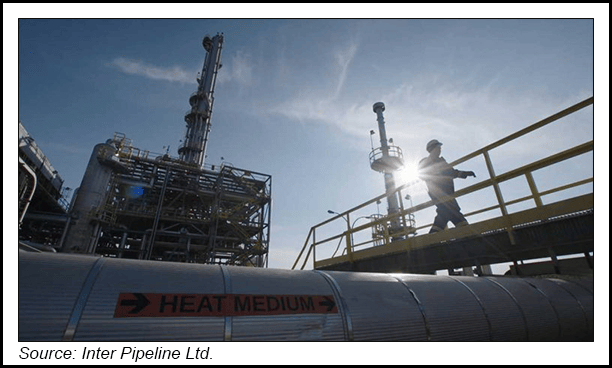 At a cost of a deal-breaking penalty of C$350 million ($280 million), IPL canceled a May agreement to combine with Calgary peer Pembina Pipeline Corp. Brookfield beat a Pembina all-stock bid valued at about C$8.3 billion ($6.6 billion).

IPL said its next steps will be “engaging with Brookfield in an effort to reach a mutually agreeable transaction in the best interests of shareholders,” then a recommendation for a deal from its board of directors.

Brookfield said IPL’s cancellation of the Pembina agreement “affirms the merits of our offer,” and it expects IPL’s board “to formally recommend our offer as any delay would be counter to the best interests of shareholders.”

Pembina, which will be paid the IPL deal-breaking penalty, announced cancellation of its takeover bid and described its loss of the takeover finance contest as a missed opportunity for the gas processing and pipeline sector.

“The industrial logic of a combined Pembina and Inter Pipeline remains unparalleled and the value creation between certain of our assets is impossible to replicate by any other entity,” said Pembina president Mick Dilger.

“While we are disappointed with this outcome, we will continue to seek opportunities for growth through focused acquisitions.”

As an investment firm holding an array of oil and gas interests, Brookfield was IPL’s top shareholder, owning 9.75% of its shares, before launching its uninvited takeover bid early this year. Proxy firms supported the Brookfield offer.

IPL assets include a plant under construction near the Alberta capital of Edmonton for C$3.9 billion ($3.1 billion) to make 525,000 metric tons/year of polypropylene from 22,000 b/d of propane. An Alberta government subsidy for projects that use gas and its byproducts covers C$408 million (US$326 million) of the cost.