The Inflation Reduction Act of 2022 (IRA) could more than double the amount of carbon dioxide (CO2) emissions that can economically be abated via carbon capture, storage and utilization (CCUS), according to modeling by Enverus. 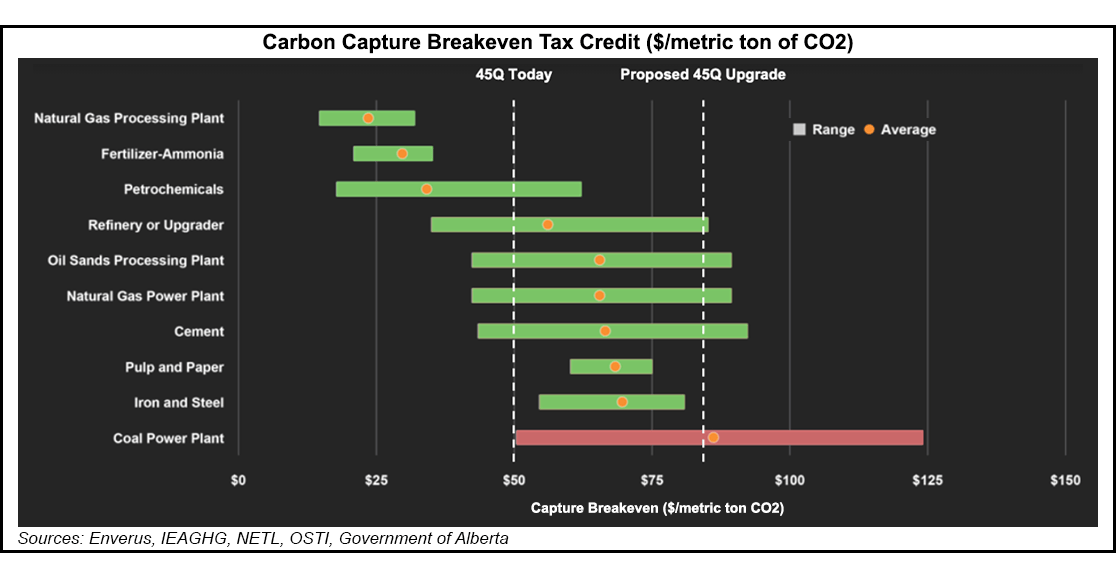 The IRA expands and extends the Internal Revenue Service Section 45Q tax credit for carbon capture. The credit is now applicable to projects starting construction before 2033, versus 2025 previously. The minimum carbon capture requirement for a qualified facility also is lowered. In addition, developers have the option to receive the tax credit in the form of direct payment for the first five years of a project, Ozkan and Luther highlighted.

The credit itself, meanwhile, is now expanded to $85/metric ton for permanent storage and $60/ton for enhanced oil recovery, respectively, up from $50 and $35 previously.

“We view natural gas as a necessary transition fuel for power generators to hit emission reduction targets, and we expect to see a boom in carbon capture being added to existing natural gas power plants in the United States.”

Sectors that can economically take advantage of the pre-IRA $50 incentive are limited to a few, including natural gas processing, fertilizer production and petrochemicals, Luther said.

Only a handful of natural gas power plants and cement producers, for example, can achieve low enough breakeven rates for 45Q to make sense under the $50 credit.

“Moving that to $85, you expand to almost all the other areas, except coal power plants, which have a much higher cost due to…the amount of other types of emissions that are associated with those plants,” Luther said.

While the $85 credit greatly applies to point-source emissions, projects capturing CO2 via direct air capture (DAC) will receive higher credits of $180/ton for permanently stored CO2 and $130/ton for CO2 stored in processes such as EOR.

However, DAC technology “is still too expensive today to generate sufficient returns even at these higher tax credit rates,” said Ozkan. But, since “it will increase that revenue stream significantly, it could entice a lot more companies to venture into it and accelerate that technology’s development.”

Now that the bill has been signed into law, “it has the potential to significantly support long-term investments in decarbonization efforts,” said Lindquist in a recent post. “The expanded 45Q tax credit should not only boost the types of carbon-capture projects already in place or in development, but also incentivize projects that focus on hard-to-capture emissions, a key step on any net-zero path.”

While oil and gas industry groups such as the American Petroleum Institute have criticized IRA provisions including tax and royalty increases, approval from the sector has been all but unanimous for the expanded CCUS incentives.