Mexico’s petrochemicals sector has suffered from underinvestment and the prioritization of crude oil production by state oil company Petróleos Mexicanos (Pemex), according to a new issue brief published by Rice University’s Baker Institute for Public Policy. 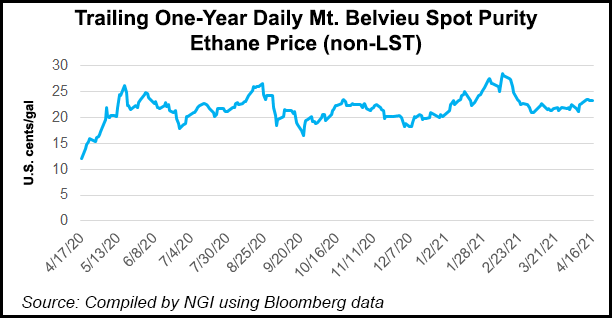 These factors have led to a steady decrease over the last decade in Pemex’s production of ethane and ethane byproducts, namely ethylene and polyethylene, according to author Adrian Duhalt, postdoctoral fellow in Mexico energy studies at the Houston think tank.

Ethane is a natural gas liquid and “the most important feedstock for Mexico’s petrochemical industry,” Duhalt said.

“The drop in ethane production over the past decade has brought a series of setbacks that go beyond…the national oil company,” Duhalt said. “In addition to falling production of byproducts such as ethylene at state-owned facilities, the rise of imports and the weakening of associated economic activities…are also among the detrimental consequences.”

“Consequently, this bountiful and inexpensive supply of ethane ignited new capital and expansion investments in the chemical/petrochemical industry that, as of February 2021, amounted to $209 billion, with the U.S. Gulf Coast as the epicenter of this wave of capacity additions.”

Duhalt noted that Mexico only earmarked about 0.7% of its gross domestic product to economic stimulus to alleviate the impacts of the coronavirus pandemic, the lowest percentage of all G20 countries.

“But public spending is only part of the equation,” he said. “Private investment is also needed if Mexico is to experience a robust economic recovery in 2021 and beyond.”

He added, “In particular, investment in ethane production/supply could spark a positive economic spillover.”

Dwindling ethane supplies were at the heart of a conflict between Mexico’s government and Braskem Idesa, Mexico’s only private polyethylene producer.

A joint venture between Brazil’s Braskem SA and Mexico’s Grupo Idesa, Braskem Idesa owns the Etileno XXI plant in Veracruz state, which has capacity to produce 1.05 million t/y of high- and low-density polyethylene, using ethane as the principal feedstock.

Pemex is contracted to supply 66,000 b/d of ethane to the plant under a 20-year, take-or-pay/supply-or-pay contract signed under the previous government, but has struggled to meet the commitment due to its declining production of wet natural gas.

Pemex, in turn, agreed to collaborate with Braskem Idesa to expand the plant’s ethane import capacity.

The original ethane supply contract remains in effect as the parties discuss possible modifications. Meanwhile, Braskem Idesa is developing an import terminal in nearby Coatzacoalcos in order to make up for the shortfall in ethane supplies from Pemex.

“The company foresees that thanks to an investment of close to $200 million, the terminal could allow imports of up to 50,000 b/d of ethane in the medium term,” Duhalt said. “This suggests that, once in operation, the relentless supply concerns that have plagued private and Pemex petrochemical complexes in past years could come to an end, which in turn would help increase production of ethane byproducts (including polyethylenes), fill the gap in the domestic market, and reduce imports.

“This is [a] testament to the potential of the private sector to help reverse the deterioration of the petrochemical industry and a lesson for Pemex and for the Mexican government to encourage private activity in the petrochemical sector while looking at long-term scenarios when setting up Pemex’s activities.”