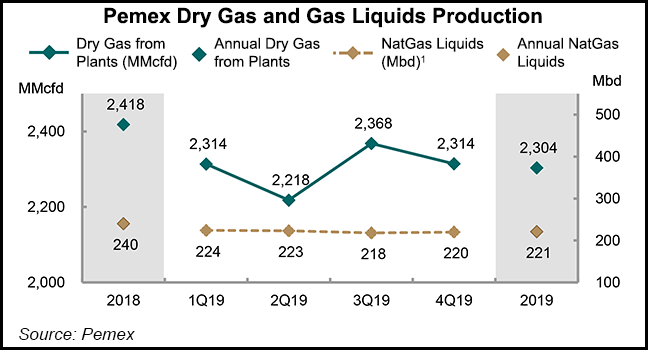 However, low oil prices and delays at Pemex’s priority fields will likely prove challenging obstacles to overcome this year, according to market observers.

“For 2020, Pemex’s investment budget amounts to $16.7 billion, of which 81% would be allocated to exploration and production,” Moody’s researchers said, “although in the past the company has invested much less than planned and such [a] high amount of capital expenditure would require much higher crude and fuel prices…”

“I think that is perhaps the biggest warning sign about what they’re trying to do,” Mexico City-based energy consultant Gonzalo Monroy told NGI’s Mexico GPI, explaining that “Pemex’s cost structure…is quite rigid and has not been able to adjust downward.”

Monroy said that lower oil prices in 2020 would “only amplify the losses that we saw last year.”

The Ixachi field, meanwhile, the only major natural gas project in Pemex’s upstream portfolio, is “completely behind schedule” due to its technical complexity, Monroy said.

Fitch Ratings downgraded Pemex debt to junk status in June 2019, the same day that Moody’s lowered its outlook for the firm to negative from stable.

Moody’s said Friday that a $5 billion capital injection by the Mexican government in September 2019 improved Pemex’s liquidity position and debt maturity profile, as did a series of refinancing transactions between June 2019 and January 2020 totaling $36 billion.

Monroy said he thinks a subsequent downgrade by another ratings agency in 2020 “is already a given.

He said he is “not sure if it’s completely priced in yet, but I tend to believe that this will be the year…when it will become evident that oil production is not increasing,” and that the Dos Bocas oil refinery “will not be completed in due time…”