Oil prices began to move higher in the last few days on an announcement that producers from in and outside the Organization of the Petroleum Exporting Countries (OPEC) will hold talks in mid-April to consider freezing output — news that may be favorable as U.S. operators meet with their lenders to redetermine their borrowing abilities. 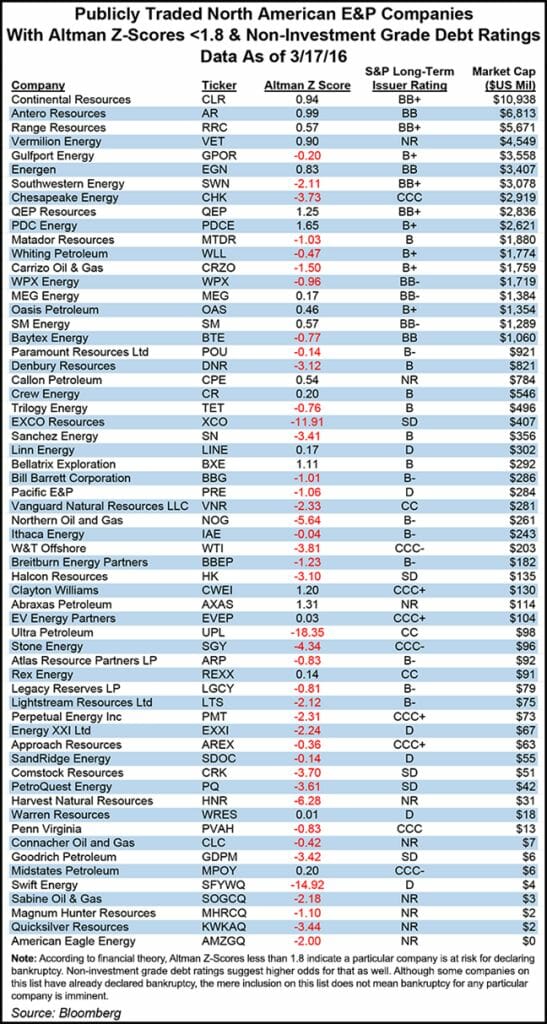 The announcement couldn’t have come at a better time for U.S. exploration and production (E&P) companies, “who are about to go through revolver redeterminations,” said NGI’s Patrick Rau, director of strategy and research.

“It could be a temporary lifeline for some,” he said. “If the banks buy into this, that is.”

More than three-dozen U.S. energy operators have filed for bankruptcy since oil prices began to collapse in 2014. Many E&Ps are at risk, which “makes the next round of redeterminations all the more important for these guys.

He compiled a list of E&Ps at risk using the Altman Z-Score, a financial indicator that attempts to determine how likely it is that a firm goes into bankruptcy. It is based on a weighted equation that factors in five financial ratios: working capital/total assets; retained earnings/total assets; earnings before interest and tax/total assets; market value of equity/total liabilities; and sales/total assets.

“Any company with a an Altman-Z Score less than 1.8 is thought to be in danger of going bankrupt, and those odds likely increase if a particular company also has a non-investment grade debt rating,” Rau said.

“Being on this list by no means indicates that these companies are headed into bankruptcy, although a number of them have in fact filed for bankruptcy protection already. But the next round of credit redeterminations will likely be all the more important for these firms, everything else being equal,” he said.

There likely will be “more pronounced borrowing base reductions this go-around compared to the fall,” said the Wells Fargo Securities LLC energy analysts led by David Tameron.

“The magnitude of the anticipated cuts is difficult to pinpoint, but given borrowing base announcements to date and commentary from management teams thus far, we believe consensus expectations are for reductions anywhere from flat to down 15-25%,” Tameron said.

During last fall’s redetermination season, some borrowing covenants were tightened, but the overall pain was less severe than anticipated as most lending bases were affirmed.

“With the 12-month strip now down $7.00/bbl or 14% since fall redeterminations, along with hedges rolling off and PDPs down 2%, we anticipate the spring redetermination cycle to be more impactful compared to the relatively benign fall 2015 cycle.”

To determine the “more extreme” scenario, if banks were to take a more conservative stance, the Wells Fargo analysts sensitized current revolver commitments based on an assumed 25% reduction to predict potential liquidity levels for its covered E&Ps.

“While capital raising efforts year to date, along with reduced activity levels implied by guidance, have allowed some to shore up liquidity…several operators will likely exit 2016 at uncomfortably low liquidity levels,” Tameron said.

The recent gains in the the oil price and equity issuances year-to-date of close to $10 billion have given E&Ps some cushion, but financial stress remains elevated for many of the smaller and mid-sized operators.

However, Tameron and his colleagues don’t expect redeterminations to push companies into insolvency, “as we believe banks do not want to own E&P assets and likely will be willing to work with companies where financing options exist.”

Meanwhile, the PDP reserve balances for its coverage group declined 2% last year from 2014. Those balances “should serve as another read-through as to which companies may see more of a change in their borrowing bases following the spring redeterminations as PDP reserves are attributed the most value in determining collateral value (65-75%) versus proved developed non-producing reserves (35-45%) and proved undeveloped reserves (PUD) (less than 15%).

In their conversations with clients, Cowen & Co.’s Ryan Oatman and Brandon Bingham said they thought that covenants that have already waived total debt ratios “will be honored, but few covenants will be changed going forward.”

Others that the Cowen analysts have talked with described the base redetermination season as something that may look “a lot like a margin call.”

“Banks seemed to think they had more leeway here, with the ability to increase borrowing bases if collateral increased accordingly — even if the borrower as a whole was underlevered.”

BTU Analytics LLC energy analyst Matthew Hoza wonders what may happen to drilling activity “if the spigot from bank financing is tightened a few cranks?”

To determine what companies may be most affected by a reduction in revolving credit lines, BTU Analytics sampled close to 60 E&Ps in various regions to see how much of their revolvers had been utilized as of the end of 2015.

The “least active operators in our sample were the ones who relied most on their revolving credit facilities,” Hoza said. The “bulk of activity comes from operators who are able to finance their operations using other means.”

What that means, said Hoza, is that if there are borrowing bases trimmed in the spring redetermination season, it won’t have “much of an impact on production activity moving forward, broadly speaking,” but some regions may be affected disproportionately.

Based on Hoza’s analysis, the Northeast and the Rockies “stand at the top of the pack” with utilization rates higher than 24%.

“With the infrastructure buildout occurring in the Northeast, operators who take commitments on new projects are required to provide a letter of credit to the midstream company to prove their creditworthiness,” Hoza said. “Oftentimes this letter of credit will be drawn from a revolver, pushing up an operator’s utilization rate. While the coming redetermination season will provide heartburn for some operators, for the most part, operators will be able to survive this haircut to liquidity.”