Halcon Resources Corp. is entering the bustling Delaware Basin through a deal to acquire 20,748 net acres in Pecos and Reeves counties, TX, in the southern portion of the play, which is a sub-basin of the Permian. Simultaneously, the company is selling up in the Eagle Ford. 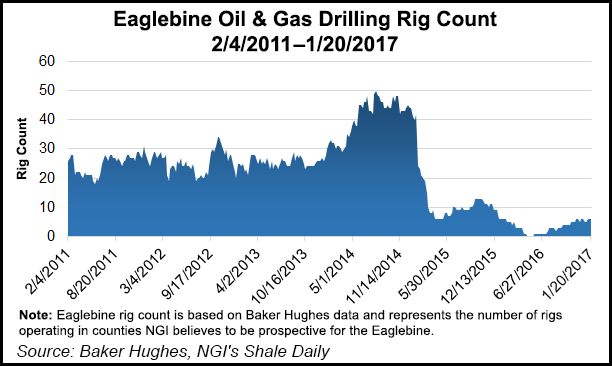 Houston-based Halcon said Tuesday it would pay an unnamed seller $705 million for the Pecos/Reeves acreage, with an effective transaction date of Nov. 1, 2016. The company also said it has an option to buy an additional 15,040 net acres in Ward County, TX, from a private operator at $11,000/acre. The Pecos/Reeves deal is to be funded, in part, with proceeds from a preferred shares placement. Closing is expected in early March.

Wunderlich Securities Inc. analyst Jason Wangler calculated the Pecos/Reeves acquisition at about $26,000/net acre after accounting for production and $55 million for midstream infrastructure being acquired. “This position is situated in between multiple recent M&A [merger and acquisition] packages at higher valuations and is in what is shaping up to be the heart of the Delaware Basin,” he said in a note Wednesday.

Also on Tuesday, Halcon said it agreed to sell its East Texas Eagle Ford assets, known as El Halcon, which are producing about 6,000 net boe/d. The sale price is $500 million with a Jan. 1 effective date.

“These transactions represent a strategic pivot for us into the Delaware Basin,” said CEO Floyd Wilson. “After the consummation of these transactions, we will have core operating areas in two of the most attractive North American oil basins [Permian and Bakken Shale] with decades of highly economic development drilling ahead of us.

“The proceeds from the sale and the equity offering provide sufficient funds to acquire the Delaware assets and fund drilling capital to grow our asset base over the next several years, while at the same time improving our leverage profile.”

Wilson said the company hasn’t drilled an Eagle Ford well in a year and a half, and while the assets being sold there are good, their economics can’t compete with what is being acquired.

The Delaware assets in Pecos and Reeves counties include 20,748 net acres and are producing 2,600 net boe/d. They include 495 gross Upper Wolfcamp A and B locations and 771 gross locations in the Lower Wolfcamp A, first, second and third Bone Spring and the Avalon Shale. Halcon estimates that the Wolfcamp A and B locations (with 7,500-foot laterals) will generate estimated ultimate recoveries of 803,000 boe and 975,000 boe, respectively, with internal rates of return exceeding 45% at current futures strip prices. Halcon said it plans to run two rigs on the assets shortly after closing and may run as many as four in 2018 depending upon oil prices.

Halcon said it anticipates about 700 “highly economic” gross Wolfcamp A and Wolfcamp B drilling locations with 750-plus additional upside locations in the first, second and third Bone Spring and the Avalon Shale. With a four-rig program, the Wolfcamp A and B drilling inventory is about 12 years and more than 24 years when the upside locations are included. Extended laterals will be possible on the “largely contiguous” acreage, Halcon said.

A “significant percentage” of the acreage has been derisked by recent drilling, Halcon said. Average working interest is about 85%, and about 90% or more of the wells are operated. Production is about 70% oil out of total liquids production of about 85%.

If the Ward County option is fully exercised, the acquisition price for the acreage comes in at $19,879/acre, the company said. This assumes $40,000/boe per day for current production adjusted to exclude $55 million of midstream/infrastructure assets related to the Pecos/Reeves assets.

Halcon said there is “significant” infrastructure in place on the acreage being acquired, including a water handling and recycling system, fresh water wells and saltwater disposal options. Halcon said it is planning to construct a second water recycling facility with an additional saltwater disposal well, which has already been permitted.

Also on Tuesday, Halcon announced a private offering of 5,518 shares of preferred stock, each share of which will be convertible into 10,000 shares of common stock, for anticipated gross proceeds of $400 million, or $7.25/share. The placement is to close in conjunction with the Southern Delaware deal closing in March. Proceeds, along with those from the El Halcon sale, would be used to pay for the Delaware acquisition; what’s left would pay down debt and bolster the balance sheet, Halcon said.