Nine years after announcing tanker shipments would start in 2018, the $10 billion plan for liquefied natural gas (LNG) exports from Canada’s Atlantic coast has secured road access to its terminal site but has not begun construction. 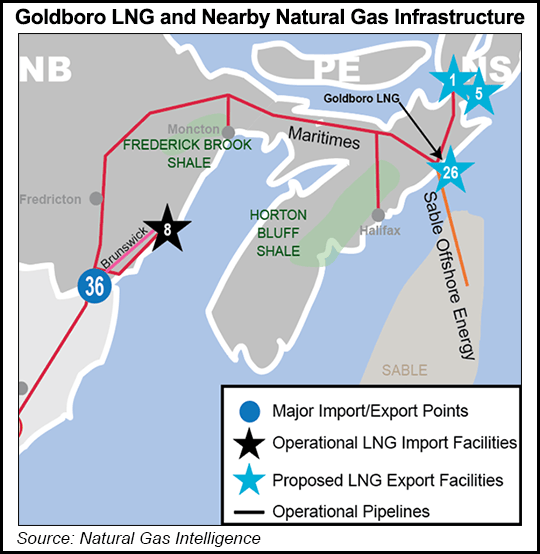 The 75-page information form by Pieridae reported that only four of 12 project essentials have been achieved, with formidable obstacles remaining.

Uniper Global Commodities SE, the lone customer for the 4.8 million tons/year (625 MMcf/d) that the first half of Goldboro would pump out identified the essentials.

The Uniper contract, extended five times since it was signed in 2013, is set to expire on June 30 and no extension has been announced. Meanwhile, the European-based trader has converted a German LNG import terminal proposal into a plan for a hydrogen storage and trading hub.

Goldboro’s confirmed successes to date have been to obtain export licenses, commission front-end engineering and design work, acquire the planned terminal site northeast of Halifax and receive some project permits.

Pieridae is seeking C$925 million ($740 million) in federal and provincial government grants and loans for Goldboro, according to a company presentation.

“Due to Covid and the inability to raise funds in the current state of energy markets in Canada and the United States, government financial support is critical to moving the project forward,” Pieridae stated in the presentation.

“Pieridae would raise the bulk of the financing for the project – about C$12.25 billion — through private sector financing.”

Pieridae indicated the final terms and conditions of both German guarantees would be negotiated “in the context of an overall project financing.”

Pieridae’s 2020 average natural gas production of 201 MMcf/d was less than one-third of the output planned for the first half of Goldboro. For the Nova Scotia project’s supply, the firm has renounced the use of the hydraulic fracturing technology employed by most operators in North America.

Goldboro has lost prospects for using Eastern Canada gas during the nine years since the project missed its 2018 delivery target. Fracturing has since been banned in Nova Scotia, New Brunswick and Quebec, and production has stopped offshore Nova Scotia.

Industry analysts have long rated as low the odds of using Western Canada gas for exports as the Atlantic terminal would be 3,000-plus miles away from the production fields in Alberta and British Columbia.

“An Eastern Canada LNG project will need an oil price of approximately $100 [U.S. per barrel] over the life of the project to break even under long-term, oil-linked LNG contracts,” predicted CERI.

The agency reported its survey “has not found a viable path to lower Eastern Canada projects’ landed cost” in overseas destinations “below the European market price if the project sources gas” from AECO or the Marcellus Shale.