Natural gas prices across the world jumped again Monday as fundamentals remain unchanged and the global market braces for energy shortages this winter. 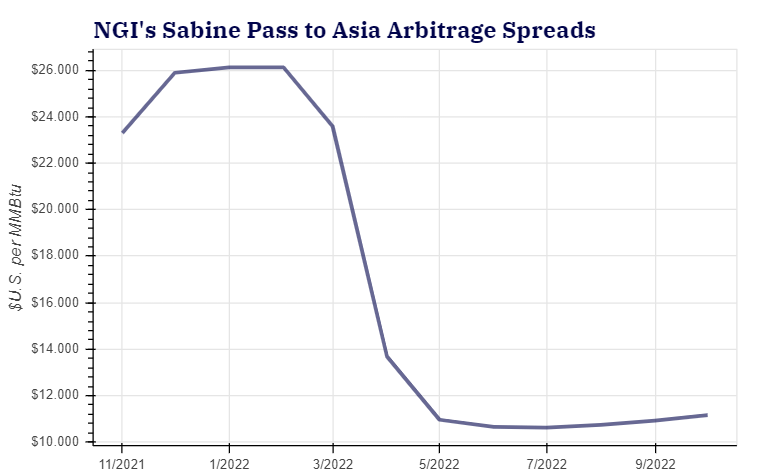 In Europe, prices bounced back from a technical correction on Friday, a day after Dutch and British futures settled well above $33/MMBtu and set new records. The Title Transfer Facility (TTF) finished near that level Monday, while the National Balancing Point finished just shy of last week’s record.

The European market ignored a 22% jump in liquefied natural gas (LNG) deliveries last week, according to Schneider Electric, while another 14 cargoes expected to arrive on the continent this week didn’t sway prices either. European natural gas storage inventories are at about 75% of capacity, the lowest they’ve been at this time of year in over a decade.

Russian pipeline supplies to Europe dropped throughout last week at the Mallnow entry point in Germany. They were down again Monday.

“If Russia’s export volumes through winter are lower than expected, this will increase the storage drawdown over the next several months, leaving European gas markets even more vulnerable to colder-than-average weather and, as a result, increasing the chance of further sharp TTF price spikes during the winter,” said Goldman Sachs Commodities Research analysts led by Samantha Dart.

Electricity prices have also soared on the continent as gas, coal and even hydropower have been in short supply.

France joined other nations including Italy and Greece last week in announcing it would block increases in natural gas prices. The country had already announced subsidies for low-income households. Over the last two months, 10 UK energy suppliers have also folded due to soaring prices, pushing an estimated 1.7 million customers onto the rolls of larger providers. European Union leaders are set to meet next week about additional measures governments can take to limit the impact of high energy prices.

Europe has also faced staunch competition from Asia, where buyers continue to stockpile as colder months near. Japan-Korea Marker spot prices hit a record of more than $34/MMBtu last week and were steady on Monday at about $32. China continues to move aggressively to target additional energy supplies on the spot market.

China’s National Development and Reform Commission last week issued a statement saying it would help to boost domestic natural gas production and aid in bringing in more coal and spot LNG imports. Government officials also reportedly ordered state-owned companies to do everything in their power to secure energy supplies this winter at an emergency meeting. Ahead of colder weather, the country has been forced in recent weeks to curb power to industrial and residential consumers in some regions.

“Demand has surged for energy-intensive aluminum, steel and cement, both within China and across the world, alongside greater international demand for Chinese manufactured products,” said EBW Analytics Group.

Other major buyers in North Asia, such as Japan, have battled for supplies as well. Japan imported 57.6 million tons (Mt) of LNG through September, according to market research firm Kpler. That’s up 2.7%, or 1.60 Mt, over the same period last year as the country has worked to avoid the shortages it faced last winter.

Prices are so high that LNG suppliers are asking buyers for credit letters to guarantee they can pay for cargoes and trading houses are being required to put up hundreds of millions of dollars to cover their exposure, Reuters reported Monday.

Strong international demand and the uptrend in European and Asian gas prices also pushed up Henry Hub futures in the United States on Monday. The prompt month gained 14 cents to finish at $5.766/MMBtu. Feed gas deliveries to U.S. export terminals have also been strong and could go higher after Oct. 10, when Cove Point LNG is expected to end scheduled maintenance.

Oil also surged Monday. Brent crude for December delivery gained nearly $2 to finish at $81.26/bbl as the market is seen undersupplied as the pandemic recovery continues. The Organization of the Petroleum Exporting Countries and its allies also met to discuss production plans.

In other developments last week, TotalEnergies SE delayed an estimate for first production at its Mozambique LNG project by two years to 2026. The company has dealt with ongoing unrest in the region and was forced to suspend work there earlier this year after insurgents attacked a town near the project site. The $20 billion project would have two liquefaction trains with the capacity to produce 12.9 million metric tons/year.