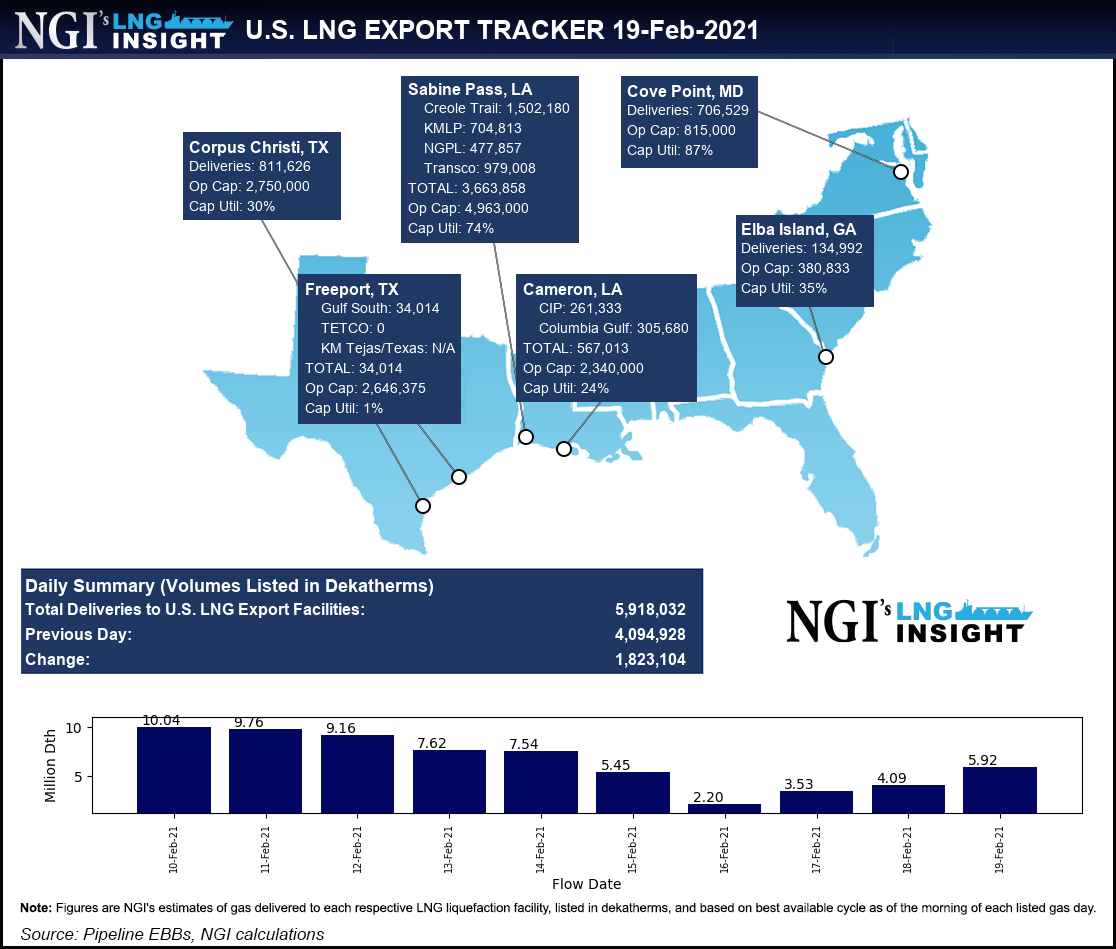 Both April spot and futures prices in Asia slipped below the $6.00/MMBtu mark as buying in the region has fallen off. That helped push prices lower in Europe as more liquefied natural gas (LNG) supply has become available.

“European spot and near curve gas prices dropped again last week, still pressured by lower heating demand due to above-normal temperatures and expectations of higher LNG supply in Europe in the coming weeks as Asia LNG spot prices continued to ease,” said analysts at Engie EnergyScan in a note Monday.

Colder temperatures expected over the weekend helped lift prompt European prices Monday, while summer contracts were also seeing support Tuesday as natural gas stocks stood at 36.7% of capacity across the continent, well below the five-year average and low for this time of year.

In the United States, the Henry Hub prompt month contract has been stable at slightly under $2.80 after rising and falling with a deep freeze in the south last month that led to a spike in energy demand. The April contract was climbing on Tuesday on a colder weather outlook for mid-March and expectations for higher storage withdrawals.

Also in the United States, feed gas deliveries to export terminals have undulated over the last week as ports along the Gulf Coast battled with foggy weather conditions. Pipeline volumes to the terminals have oscillated back and forth at near 8 Bcf and above 10 Bcf as shipping operations have been impacted by the weather.

Producers could soon be sending more natural gas to the Gulf Coast as Venture Global Inc.’s Calcasieu Pass LNG may start production this fall. According to Bloomberg, the terminal, which is under construction in Cameron Parish, LA, has offered cargoes for loading between October and December 2022. Once completed, the terminal would have the capacity to produce 10 million metric tons/year of LNG.

Elsewhere, China is aiming for online trading to begin in its national carbon market by the end of June, according to news reports after the Minister of Ecology and Environment Huang Runqiu publicly pushed the target. The market is to focus on the country’s power sector. Its rules became official last month.

In Russia, PAO Novatek announced a deal last week to supply China’s Shenergy Group with 3 million tons (Mt) of LNG from the Arctic LNG 2 project for 15 years. Supplies would be delivered to China on a delivered ex-ship basis.

Novatek sanctioned the Arctic LNG 2 project in 2019. It would be sited north of Siberia and have a capacity of 6.6 Mt annually. The first of three trains is slated to come online in 2023.