The coronavirus reasserted its influence over the Lower 48 oil price outlook Monday as reports of new cases of the disease outside of China stoked fears both at home and abroad over the outbreak’s impact on global economic activity. 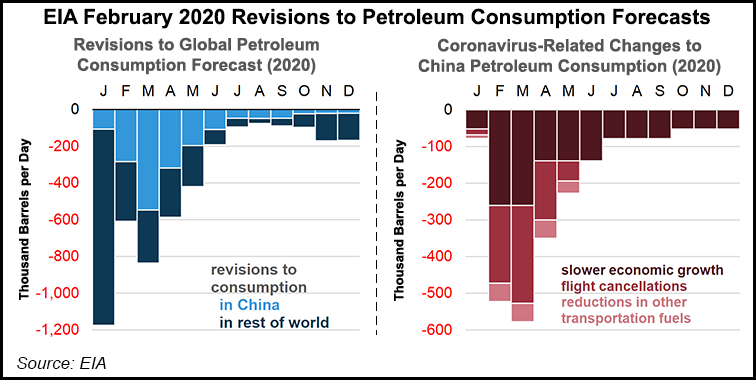 Both oil futures and stock markets fell sharply in Monday’s trading as news outlets reported outbreaks of the coronavirus in Italy, Iran and South Korea.

Amid “an escalation in reported cases” of the virus, named Covid-19, analysts at Raymond James & Associates Inc. said in a note early Monday they were lowering their oil demand expectations.

“The quarantines and travel bans started to emerge in mid-January, so the global demand impact that month may have been only around 500,000 b/d,” the Raymond James analysts said. “By contrast, we look at February and March as the months of peak impact at 2.0 million b/d. The 1Q2020 average comes out to 1.5 million b/d. For 2Q2020, we assume a linear decline in the demand impact towards zero by the end of June, yielding a quarterly average of 1.0 million b/d.”

Accordingly, the firm revised lower its 2020 WTI forecast to $60, down from $65, with Brent lowered to $65 from $70. By quarter, Raymond James lowered its oil price expectations by $6 for the first quarter, $4 for the second quarter, $7 for the third quarter and $3 for the fourth quarter.

A more prolonged and/or more geographically widespread outbreak could present a worst-case scenario.

“The first question mark is duration: for example, the possibility that the existing restrictions in China are maintained for all of 2020,” the Raymond James team said. “The second issue is magnitude, including the prospect that international travel grinds to a halt not only to/from China but in other regions as well. We cannot rule out these scenarios, but at this point it seems premature to paint such a dire picture.”

The geopolitical tensions in the Middle East that sent oil prices soaring earlier this year now feel like “ancient history,” having been “vastly overshadowed” by the threat of the Covid-19 crisis, they said.

“An issue that has come from the proverbial ”left field,’ the virus outbreak is a headwind for the entire global economy, with some sectors more affected than others. Case in point: the global oil market,” the Raymond James analysts said. “…There is no escaping the fact that China — the world’s largest oil importer — will have meaningfully weaker near-term oil demand than we had envisioned as the year began.”

However, the coronavirus and weather impacts from a warmer-than-normal winter in the Northern Hemisphere “are transitory, and they do not change our view that the global oil market will need sustainably higher prices in order to avoid a major undersupply in 2021 and beyond.”

Goldman Sachs Commodities Research analysts wrote in a recent note that the world is “not out of the woods yet” when it comes to the coronavirus impacts. The outbreak has created the largest disruption to commodity-related activity in more than a decade, they said.

“Though the situation remains unclear, we note three key facts,” the Goldman team said. “One, their economy has yet to materially restart; two, dislocations are creating a backlog in global shipping; and three, Chinese policymakers are committed to minimizing this economic disruption through policy stimulus.”

The Goldman analysts noted “significant downside risks to commodity prices” based on near-term supply and demand fundamentals that “are severely out of balance in nearly every market.”

As for shipping activity, the timing of the lunar new year may have served to mask Covid-19’s “true impact” on international trade, according to Goldman.

“Coming as it did — right at the lunar new year — meant that international trade with China was at a seasonal low. The timing created a natural buffer in global supply chains — overseas manufacturers expected a sharp slowdown in Chinese industrial activity over this period and planned accordingly,” the Goldman analysts said. “Normally, ships leave just before the lunar new year, laden with finished products, and return with scrap/raw materials after the lunar new year is over.

The IMF’s baseline scenario would see 2020 growth in China of 5.6%, or 0.4 percentage points lower than forecast in January.

“But we are also looking at more dire scenarios where the spread of the virus continues for longer and more globally, and the growth consequences are more protracted,” Georgieva said.

Citing data from the Johns Hopkins University Center for Systems Science and Engineering, analysts at ClearView estimated that the top 10 non-U.S. sites in terms of reported cases of the coronavirus make up more than 30% of both gross goods exports and global GDP.

“Even a limited curtailment of manufacturing, purchasing and shipping in these countries seems likely to further depress growth,” according to ClearView.