Germany’s recently nationalized utility Uniper SE, previously one of Europe’s largest buyers of Russian pipeline natural gas, is moving to recover some of its monumental losses from Gazprom PJSC while it continues to divest from the country. 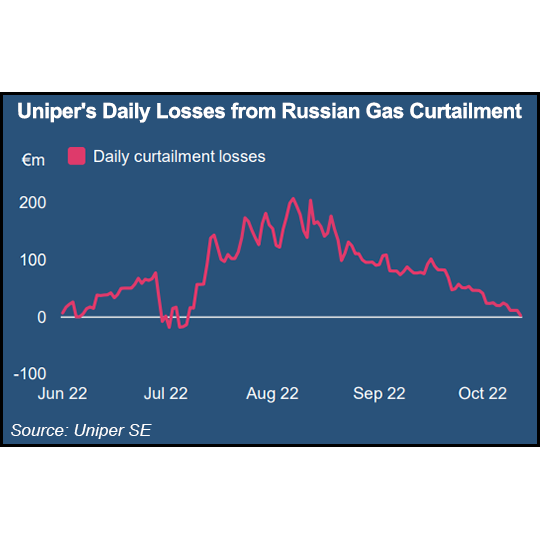 Uniper management announced in Düsseldorf Wednesday the company is pursuing arbitration to recover damages from Gazprom it claims it is owed for natural gas the Russian controlled firm has failed to deliver since June.

Uniper has lost more than $12 billion so far this year replacing lost Russian pipeline gas at higher spot prices and expects to continue accruing major losses into 2024, according to the company.

“We incurred these costs, but they are not our responsibility,” CEO Klaus-Dieter Maubach said. “We are pursuing these legal proceedings with all due vigor: We owe this to our shareholders, our employees and the taxpayers.”

Management also announced Uniper is also moving to further distance itself from its Russian business unit, Unipro. A transaction has been underway to sell Unipro to a Russian owner since last year, but Maubach said the deal hasn’t been approved by Russian financial regulators.

Uniper reported its central information systems and cash flows have been separated “for some time” and the firm’s board approved further efforts to separate the companies “as far as possible.”

“With a divestment not being under our control, we have taken far-reaching steps to fully separate our business outside Russia from the Russian activities and the associated risks, even without a sale, as far as is possible under the current circumstances,” Maubach said.

Along with energy infrastructure security concerns, speculation has loomed that Uniper’s Russian assets may be a financial and geopolitical headache for Germany after nationalizing Uniper. The German government has since stepped in with several financial bailouts for Uniper since Russia began curtailing western flows of gas and could soon be a 98.6% stakeholder in the firm after the latest capital injection.

If the acquisition closes at the end of the year, analysts have posited that more than $2 billion worth of assets could be stranded in Russia. Earlier in the year, Germany took control of the local unit of Russia’s Rosneft PJSC, as well as its stake in three refineries.

Meanwhile, the firm has tried to replace lost Russian pipeline gas with future liquefied natural gas supplies and expand its import infrastructure while preparing for the coming winter. Germany, along with other European Union members, have built above-average winter storage levels while trying to curtail domestic consumption in an effort to avoid shortfalls.

As a result of those policies, Uniper disclosed earlier in the week it planned to return the fuel-oil burning Irsching Three power plant in Vohburg to service most of next year as a back-up. The unit has been held in reserve and is scheduled for decommissioning at the end of next year.