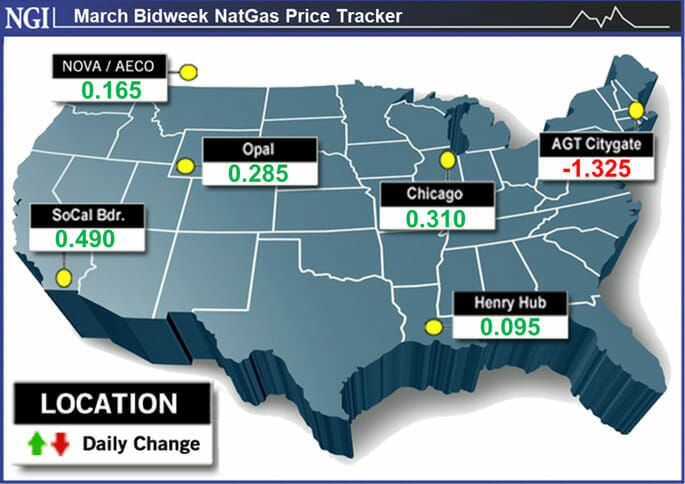 NGI’s March Bidweek National Avg. climbed 7.0 cents to $2.895/MMBtu, a reflection of both fading winter premiums for demand areas in the Northeast and double-digit gains for points throughout producing areas of Texas and the Midcontinent.

Coming off last month’s never-before-seen price spikes in the physical market and large volumes of production forced offline because of the freeze, locations throughout West Texas and Oklahoma picked up large month/month gains during March bidweek.

Among the major takeaways from last month’s energy crisis, analysts with the International Energy Agency (IEA) said in a recent note that what transpired proves “a resilient electricity system requires a resilient natural gas system.

“This is particularly so for Texas, which has an energy system with a high penetration of electricity in space heating and a large share of gas-fired generation despite an increasing share of variable renewables in the power generation mix,” the IEA analysts said. “As more power systems become reliant exclusively on natural gas to provide incremental supply in extreme temperatures, the reliability of the gas system becomes critical for electricity security.

“The resilience of those energy systems will depend to a great extent on the robustness of the physical deliverability of the gas network — which should become a key parameter for electricity security assessments in the coming years.”

As of Monday, recent Lower 48 production estimates pointed to a complete recovery for supply following last month’s cold-related disruptions. According to Bespoke Weather Services, daily production data over the weekend showed output “higher than what we saw before the freeze-offs.”

From a macro perspective, Goldman Sachs analysts in a recent note characterized the impacts of the February deep freeze as “transient.”

Despite the “historic shock” from record amounts of production going offline, “our February balances only tightened by 2.2 Bcf/d, as nearly 6 Bcf/d of production disruptions were mostly offset by higher Canadian imports” as well as lower demand for liquefied natural gas feed gas.

The futures market similarly appeared to gauge February’s energy fiasco as more a short- rather than long-term concern for balances. Amid underwhelming forecasts for the month ahead, the March Nymex contract limped into expiry last week, rolling off the board at $2.854.

The past month’s cash market turmoil ultimately led to only a 9.5-cent month/month increase for prices at benchmark Henry Hub in March bidweek.

As winter heating demand fades and shoulder season nears, potential near-term price weakness stands in contrast to what analysts see as a far more constructive setup for summer and beyond.

“The market remains severely undersupplied, and Nymex futures are significantly undervalued on a fundamental basis,” EBW Analytics Group analysts said in a recent note to clients. February’s supply crunch “provided the catalyst for the market to move higher — and the lack of upside price action suggests…a likely period of consolidation before a sustained move higher in late April or May.”

Keeping downward pressure on prices in the immediate term, forecasts for the first half of March have failed to impress.

Bespoke on Monday highlighted cooler trends in forecasts over the weekend, which the firm attributed to “lingering effects from some blocking” in the region of the North Atlantic Oscillation, resulting in lower temperatures for the eastern United States.

“This bumps forecast demand up to normal levels late this week into the weekend, but only serves to delay the inevitable bigger warming that is on the way next week, when demand falls to very low levels relative to seasonal normals,” Bespoke said.

For now, the firm expects prompt month prices to “remain under pressure, with another test of the $2.70 level likely this week.”

Expectations for mild March temperatures likely helped keep a lid on prices last week even as the Energy Information Administration (EIA) reported a monster 338 Bcf weekly withdrawal from U.S. gas stocks. The draw left Lower 48 inventories at 1,943 Bcf as of Friday, 298 Bcf less than last year and 161 Bcf below the five-year average.

“We remain firmly in the bullish camp on summer gas pricing, but we don’t expect the next storage inflection point until mid-2Q2021, when a lack of supply growth coupled with rising cooling demand starts to drive an expanding deficit versus the five-year,” the TPH analysts said in a recent note. “For the next two months or so, it’s possible a lack of catalysts allows prices to drift lower.

“…If so, we’d use the opportunity to add long exposure into the summer and an undersupplied winter, which could see the return of $4 gas.”

In other March bidweek price action, the seasonal decline of winter heating demand dropped prices sharply in the Northeast. Algonquin Citygate tumbled $1.325 to $3.740, while Transco Zone 6 NY shed 67.0 cents to $2.585.

The “February extremes” helped set new demand records and led to storage withdrawals that reached “never-before-seen levels” as operators worked to balance supply and demand, according to King. Canadian exports to the United States during the cold blast “surged to levels not seen for more than a decade.”

This comes as natural gas demand in Alberta has been on the rise, owing to a combination of consumption from the province’s oilsands and efforts to transition from coal-fired to gas-fired power generation, the analyst said. This lays the groundwork for additional tightness in the market heading into the 2021/22 winter.

“As a result of the additional consumption, Alberta’s average gas demand in 2021 as a whole could be as much as 0.5 Bcf/d, or 9%, higher than in 2020. That means another 0.5 Bcf/d of underlying demand that is going to be there next winter,” King said.