With March forecasts pointing to another possible record warm month, and natural gas storage inventories heading toward a robust 1.9 Tcf for the end of winter, natural gas March bidweek prices plunged further below the $2/MMBtu threshold. NGI’s March Bidweek National Avg. dropped 28 cents from February bidweek to $1.530*, which is also a $1.415 discount to the March 2019 Bidweek average. 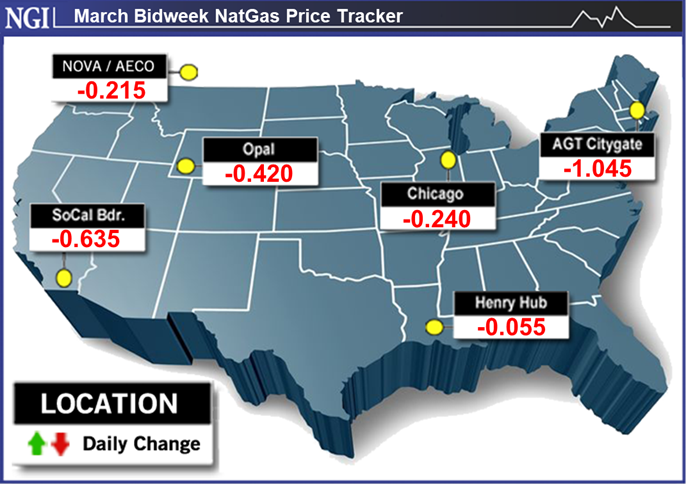 The deterioration of gas prices to multi-year lows follows the winter that wasn’t, with any blasts of frigid air that hit the Lower 48 over the past four months proving to be fleeting and insufficient in boosting demand for longer than a few days. That’s a starkly different scenario than last March, when the market faced record-cold to start the month and had about 660 Bcf less in storage than it does currently. Last March, bidweek prices averaged $2.945. The March Nymex natural gas futures contract, meanwhile, rolled off the board at $1.821.

Weather models continue to paint a bearish outlook for gas demand over the next few weeks, and perhaps longer. As has been the case virtually all winter, upper level troughing continues from Alaska/northwest Canada over to Greenland, which keeps colder air bottled up in the polar regions and allows warmth in areas of the United States that are important for natural gas consumption, according to Bespoke Weather Services. The firm’s current 15-day forecast is 65 gas-weighted degree days (GWDD) warmer than the five-year average and 75 GWDD warmer than the long-term 30-year average.

“With no sign of change in the pattern type even out in the middle of the month, it is possible that we make a run at another top 10 warm month,” Bespoke said.

With only glancing blows of chilly, but far from frigid, air hitting the Northeast over the next couple of weeks, prices across the region posted substantial decreases of more than $1 month/month. Algonquin Citygate March bidweek prices tumbled $1.045 to $2.090. Transco Zone 6 NY plummeted 69.0 cents to $1.700.

Much smaller losses were seen in Appalachia, except along Texas Easter Transmission, which continues to operate under restrictions as system-wide maintenance continues. Texas Eastern M-3, Delivery March bidweek prices plunged 58.5 cents to $1.610.

Meanwhile, the lackluster demand has kept plenty of natural gas in the ground this winter. The Energy Information Administration (EIA) said that as of Feb. 21, total working gas in storage stood at 2,200 Bcf, 637 Bcf above year-ago levels and 179 Bcf above the five-year average. Market observers see the upcoming storage withdrawal as possibly the last triple-digit draw of the winter season, with 1,900 Bcf in sights for the end of March.

Despite the overwhelmingly bearish backdrop for natural gas, there are signs that balances remain rather tight. On the supply side, EBW Analytics Group noted that the latest EIA monthly natural gas production report, which reflects more accurate data than daily production flow monitors, revised initial November estimates lower by 0.46 Bcf/d and stated an outright 0.35 Bcf/d month/month decline for December.

On a state level, the only notable increases came from associated gas output in Texas (0.16 Bcf/d) and New Mexico (0.14 Bcf/d), while Appalachian tri-state output declined by 0.39 Bcf/d, according to EBW.

To be sure, robust drilling activity in the Permian Basin continues to boost volumes of associated gas into an already saturated market. With insufficient gas takeaway capacity in the region, regional prices have struggled throughout the winter. Waha March bidweek prices dropped 57.0 cents month/month to average minus 29.0 cents.

However, bargain-basement gas prices have driven increased demand from the residential/commercial sector. Genscape Inc.’s senior natural gas analyst Eric Fell pointed out that the EIA’s latest report reflects a dramatic revision upward, to the tune of 1.8 Bcf/d, to residential/commercial demand for November. The change puts the EIA data more in line with what Genscape had pegged for that demand sector during November.

“In all our modelling, our goal is to represent what we believe to be reality,” Fell said. “This means that sometimes we elect not to match the EIA.”

EIA’s latest report shows that Lower 48 residential/commercial demand averaged 31.9 Bcf/d for November, with much of the upward revision taking place in the East region, which includes New England and the Mid-Atlantic.

Meanwhile, growing liquefied natural gas (LNG) demand could boost prices in the coming months as new production units are set to enter service. Sempra Energy’s Cameron LNG export facility announced on Monday that the second production unit at the Hackberry, LA, terminal has begun commercial operations under the tolling agreements it has in place to export the super-chilled fuel globally.

Cameron completed all major construction activities for Train 2 last year and began receiving gas flow for testing in November as it reached the final stage of the commissioning process. In December, Train 2 began producing LNG and shipping commissioning cargoes as part of the process to support stabilizing production and performance testing, the company said. Train 2 includes a projected export capacity of 4 million tons/year of LNG. Train 1 began commercial operations in August 2019, and Train 3 is expected to begin operations later this year.

However, the timing of the new export capacity could not be worse. A warmer-than-normal winter in the northern hemisphere has slashed demand and left storage stocks overseas just as robust as in the Lower 48. Compounding the issue are mounting fears over the coronavirus, which has slashed demand in China, considered the fastest-growing LNG demand market, and has led to diverted cargoes and floating storage.

“During the next two to three months, the strength of the U.S. LNG export market is likely to become the most important factor determining how much further US gas prices decline, EBW said.

Late last month, Houston-based Cheniere Energy Inc. painted a “relatively rosy picture,” according to EBW, announcing that it had no cancellations for March and still expected to ship 38 of 40 cargoes scheduled for April. In the brief period since then, however, cases of the coronavirus have now been reported in 63 countries, including 13 states in the United States. Japan, China and South Korea, the three largest LNG importers, are at the epicenter of the crisis, and more than 1,000 cases have been reported in Europe, the primary destination market for U.S. exports during last year’s injection season, according to EBW.

“A significant economic contraction is nearly guaranteed, reducing consumption in these markets. These developments raise serious questions regarding the ability to place U.S. cargoes, particularly in the critical period between May and September,” EBW said.

As a result of new liquefaction capacity added during the past year, the number of U.S. export cargoes available to be placed during this year’s injection season has nearly doubled, adding nearly 1,000 Bcf of new supply, according to the firm. With the global economy stalling, increased competition from Yamal and dwindling storage in Europe, U.S. projects may struggle to find ways to place much of the new supply, it said. “Curtailments of several hundred Bcf are possible, putting intense downward pressure on the U.S. market.”

For now, however, benchmark Henry Hub prices appear to be holding comfortably in the $1.80 range. March bidweek traded in a tight half-cent range from $1.820-1.825, falling 5.5 cents month/month.

Similarly small declines were seen elsewhere throughout Louisiana, and in most of the Southeast. The exception was Transco Zone 5, where March bidweek prices tumbled a hefty 40.0 cents to $1.895.

Prices throughout the Midwest posted double-digit decreases for March as outlooks show only one slightly strong cold shot racing across the Midwest late this week. Although overnight lows are forecast to slip into the 10s to 30s beginning Friday, NatGasWeather sees only a “minor increase” in national demand.

“What makes the coming pattern quite bearish is the back seven days of the 15-day forecast are warm weighted, with highs of 50s to 80s set to cover most of the United States March 8-15 for very light national demand.”

Price action on the West Coast was much the same as it was across the rest of the country, with steep discounts seen across the region as rising temperatures are set to squash demand in the coming weeks. Northwest Sumas March bidweek prices plunged 43.5 cents month/month to $1.535, although most other market hubs in the Rockies posted decreases of less than 20 cents.

*In a previous version of this story, NGI inadvertently published an incorrect March 2020 bidweek price for both Tenn Zone 6 200L and Tenn Zone 6 200L North, listing both locations at $1.740. We did not receive any transactions for either location, so therefore both of those listings should have shown blanks.

As such, NGI has no March 2020 bidweek price for either location.