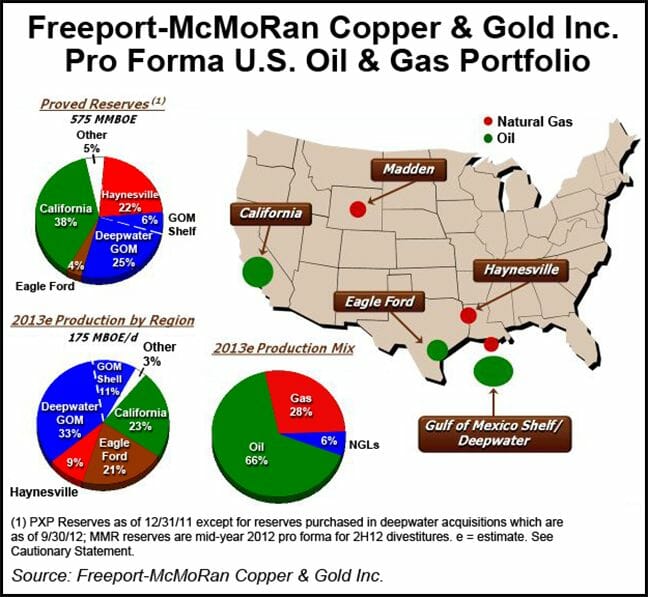 Freeport, which already has a close working relationship in both companies, agreed to pay $6.9 billion for PXP and $3.4 billion ($2.1 billion net) for McMoRan. Freeport Chairman Jim Bob Moffatt co-chairs McMoRan with Freeport CEO Richard Adkerson. PXP holds a 31.5% stake in McMoRan. Including assumed debt of about $10.5 billion, the transactions total $20 billion.

Freeport, a global mineral producer, would acquire a solid U.S. portfolio both in the onshore and offshore. PXP’s portfolio includes properties in the Eagle Ford and Haynesville shales, onshore California, in Wyoming’s Madden Field, and in the Gulf of Mexico (GOM). McMoRan is a GOM shallow water expert, concentrating its exploration efforts in the ultra-deep natural gas trend. It also has a set of assets in southern Louisiana’s onshore.

During a conference call Wednesday, Moffatt said the U.S. oil and gas business is especially tantalizing today. Oil prices hovering near $100/bbl provide solid prospects while natural gas will prove to be a winner over the long-term, he said. Moffatt founded Freeport McMoRan Inc., which in 1994 separately spun off the minerals business and the exploration company.

“When you have the chance to realize what a treasure trove of assets we have brought together, and the management team now in place for the combined company, we will be in a position to explore or purchase any natural resource asset…Nobody will have a better feel for valuation…”

“This takes us from a mid-size player to a major player from both a resource business and a mining business…We are leapfrogging everybody in the mining business, and with a great grasp of other assets we have in North America, South America and Africa, we have a situation where we have the best mining in the world and now we have the best oil and gas assets…”

Adkerson noted that 85% of the acquired revenues today are from oil. However, the transaction provides a “favorable entry point to a source of low cost, long-term natural gas supplies,” he said.

PXP also is a big leaseholder in the deep and shallow waters of the Gulf of Mexico (GOM).

PXP CEO Jim Flores, who shared a microphone with the Freeport team, said the deal would allow the natural gas properties to not be sold — a prospect that he said was inevitable given current prices and better returns from oil.

“Here at Plains we’ve achieved a coveted position in the oil and gas business. We have high-margin properties…but painfully, we would have had to leave our natural gas business that we think is very strong because it wasn’t economic in the near-term” since the company began acquiring more assets in the GOM. “We would have had to liquidate in the bottom of the market. With this transaction, we’re not selling any gas assets. They are complementary with McMoRan’s story, which has very strong potential…

“We’re gas bulls from 2015 on from the standpoint of fundamentals,” Flores said. Prices will be “soft in the next two years” but the combined package of assets provides a cushion for the future.

“We have a great profile in the Eagle Ford and over 1,000 square miles of gas [acreage potential] in the Haynesville in which we have an interest in…Our gas business is in the best spots, the Haynesville, the Gulf of Mexico, and of course, the Madden Field in Wyoming offsets the gas in California to cook our oil…

“In the onshore, our thinking is about that we don’t want to be everything to everybody. We’ve concentrated in areas where we know we can be strong…The Eagle Ford, Haynesville, California gives us that.”

Moffatt would continue to chair Freeport. B. M. “Mack” Rankin Jr. also would continue as vice chairman, and Adkerson would remain CEO and become co-vice chairman. Once the transaction is completed PXP Chairman and CEO Jim Flores would become a vice chairman and CEO of Freeport’s oil and gas operations. Kathleen L. Quirk would remain Freeport’s CFO. Flores and two other PXP board members also would be added to Freeport’s board. The corporate headquarters would be in Phoenix, with offices in Houston and New Orleans.

Once the transaction is completed, 48% of Freeport’s assets would be in North America; 26% would be U.S.-based oil and natural gas properties.

“These assets are consistent with the characteristics of what we were looking for in the mining industry,” Adkerson said during a conference call. “These are high-quality, low-cost and expandable…The margins and cash flows from the oil and gas business are strong…and we expect the cash flows to be able to fund capital expenditures on a standalone basis…”