European natural gas prices fell for a sixth consecutive day on Wednesday, the longest stretch of declines in more than a year, after they hit record highs last week. 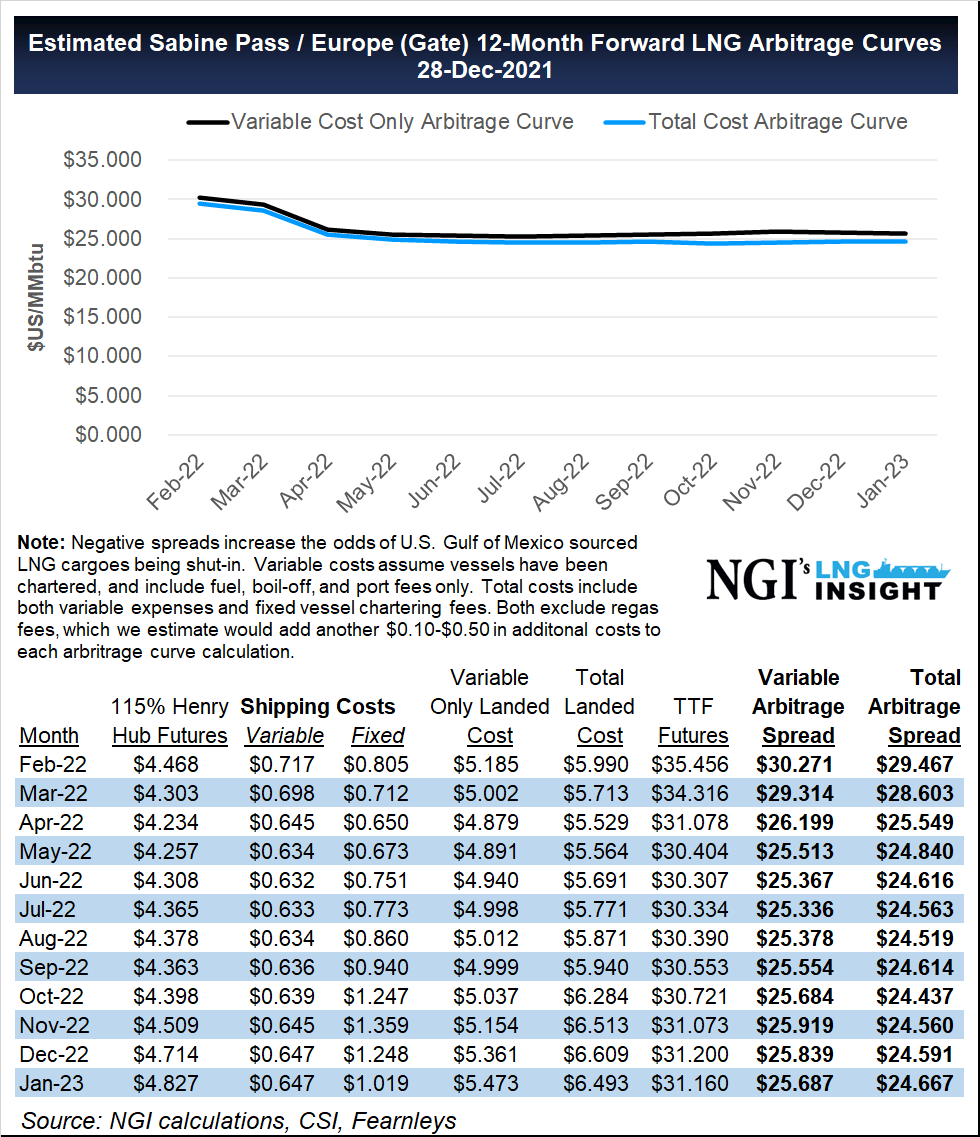 The February Title Transfer Facility (TTF) contract has almost been cut in half since it hit a record  of nearly $60/MMBtu on Dec. 21. The contract settled closer to $32 on Wednesday. The UK’s National Balancing Point has witnessed a similar decline. Warmer weather, industrial shutdowns that came in response to sky-high prices and curbed demand, along with dozens of LNG cargoes headed to the continent, have weighed on prices.

At least 0.8 million metric tons of LNG being carried by 11 tankers had been redirected toward Europe, according to Rystad Energy. Several others that changed course away from Asia in recent weeks to take advantage of higher prices in Europe are being tracked as they move toward the continent.

European natural gas prices had soared by more than 400% this year on low storage inventories, limited supplies from Russia and stiff competition for LNG cargoes with Asia. Fundamentals remain largely unchanged. The recent decline in European prices, which remain extraordinarily high relative to their averages in recent years, could be fleeting.

“LNG diversions from Asia are a useful stop-gap measure but are not a sustainable substitute for stable pipeline supplies, considering LNG is a waterborne commodity and demand in Asia may yet see an uptick in January,” said Rystad analyst Kaushal Ramesh.

Gazprom PJSC again chose not to book any spot capacity at the Mallnow compressor station in Germany on Wednesday as it had for the previous nine days. Deliveries on the Yamal-Europe pipeline moving westward reversed back toward Poland on Dec. 21 amid rising temperatures in Russia and what President Vladimir Putin said last week was a lack of requests from European buyers. The company also elected not to book interruptible pipeline capacity at an auction Tuesday for January delivery to Europe after booking a small share of firm capacity at another auction earlier in the month for firm capacity.

Ongoing concerns about when the Nord Stream 2 (NS2) pipeline might enter service as it faces regulatory delays also has the market on edge about Europe’s longer-term supply needs. NS2 is seen as a crucial outlet to move more gas from Russia into Germany.

“Further, given the low likelihood of NS2’s approval in the first half of 2022, prolonged zero or reverse flow will accelerate storage withdrawal and may reflect higher restocking demand in the injection season of 2022, effectively flattening any potential backwardation in the TTF forward curve,” Ramesh said.

LNG supply outages and falling spot prices could also bring more of Asia’s buyers back to the table and tighten the market again, particularly if colder weather arrives in January.

Japan-Korea Marker spot prices inched up slightly Wednesday toward $33 as more LNG made its way toward Europe. Nearer-term futures prices, however, indicate that the cost of natural gas is likely to stay elevated in Europe through the winter. While it’s currently more profitable to move U.S. LNG to Asia in February, the arbitrage spread to Europe is more profitable in March and April, according to NGI calculations made late Tuesday.

European natural gas storage inventories are at about 56% of capacity, compared with the five-year average of 74%.