The last year has been a chaotic one for the liquefied natural gas (LNG) trade, and it could be a preview of what’s to come in the years ahead as the super-chilled fuel is further commoditized, according to Flex LNG Ltd. CEO Oystein Kalleklev. 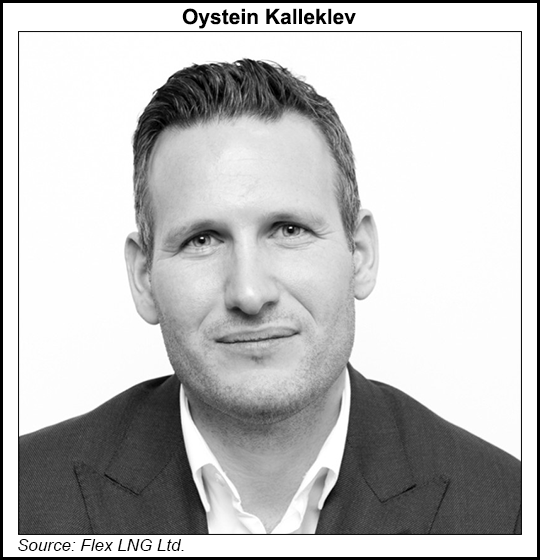 Flex owns a fleet of 13 LNG carriers. Like others in the business, it’s been a busy year for the company. The trade has grappled with record LNG and freight prices amid a rebound in demand and supply disruptions. The market is also adapting to a fast-changing energy landscape at a time when governments across the world are aiming to meet increasingly ambitious climate targets.

The highs and lows that have characterized the LNG trade since 2020 are here to stay, Kalleklev said in an interview with NGI’s LNG Insight. He believes “volatility will probably be much higher in the future than what we have experienced in the past,” as the market continues to evolve.

NGI: It’s been a wild year for the LNG market, especially compared to 2020. Have you ever seen the market like this before, is there anything that’s really surprised you?

Kalleklev: I think a lot of things have surprised us. I think the closest we’ve got to it is  Fukushima, when the Japanese took their nuclear power offline and a lot more LNG was needed. Basically, Japan became the source of the LNG spot market at the time. In 2011, LNG shipping was simpler, going from point A to point B. There were largely portfolio players and utilities in the market, and they were able to divert cargoes from Europe to Asia to fill that gap. Of course that still created a crazy market for prices and ships. There weren’t that many ships in the spot market or those that came off charters, so there weren’t many people who were able to benefit from that. It was a bit different back then. It was more like a few companies had huge demands.

We’re in a situation now where the global economy has a thirst for LNG. It’s also very volatile because we started the year with record high prices, record cold and low inventories at the start of the injection season. Things slowed down a bit in March and April – prices in Europe and Asia were around $5-6/MMBtu. It’s hard to imagine these days that they’re around $40 when they were so low at the beginning of the year. That was true for the freight market too. We went from the best spot freight market ever in January to a pretty depressed market in March. Everything bounced back pretty quickly, driven particularly by Asian demand as they’ve tried to get their hands on cargoes to fill storage for winter. We’ve seen the consequences of that. Europe has become desperate to get cargoes. The continent is competing head-to-head with Asia. They’re even willing to pay a premium to Asian prices, which is uncommon. It’s a rather unique situation.

NGI: What has all this meant for Flex LNG?

Kalleklev: It’s been a good year for us. We have also guided for very strong numbers in the fourth quarter. We have benefited from a stronger spot market, but also a much stronger term market for our vessels. Earlier in the year, all of our ships were exposed to the spot market. Today, we are 70% exposed to longer-term contracts and only 30% spot exposed. We have been able to lock in ships for three- to five-year periods at very healthy rates that benefited from a stronger market.

Freight rates in the spot market have dropped recently from around $300,000/day to about $200,000/day. The fall suggests things are a bit bearish on the spot market, but it hasn’t bled into the term market, where levels are stronger. I think that’s taken a lot of people by surprise as some thought 2021 would be a very challenging year for freight with so many newbuild ships coming out of the yard this year, in excess of 50 ships. Demand has also been on the positive side. There’s been more demand than people were expecting and that’s being driven by Asia. So, sailing distances have gone up this year. It’s been a very tight market, even in the summer when things softened a bit.

NGI: Flex has ships under time charter agreements with Cheniere Energy Inc. How are growing volumes from the United States impacting LNG shipping operations and the broader market?

So, you need a lot more ships to handle U.S. exports than the average cargo. If you have strong exports in the U.S. and strong demand in Asia, that’s really good for the shipping market, and that has been the case from January to November. Over the last week or so, European prices have become so high that more cargoes from the U.S. are traveling shorter distances into Europe. This is why the spot freight market has softened over the last two or three weeks.

NGI: Are there enough ships to handle all this demand in Asia and Europe?

Kalleklev: It really depends on the trading patterns. If you look at 2019, it was a strange year for LNG shipping, you had a warmer winter and some slowdown in China’s economy, and a trade war between the United States and China. We also saw the strongest growth yet in U.S. LNG exports, but the freight market was weak because most of those new volumes went to Europe and Chinese demand was a bit on the soft side, along with Japan and Korea. The trade patterns have a lot of impact on the freight market. In 2019, most people thought there weren’t enough ships, but there was a fairly balanced market, probably too many ships. This year, most people thought there would be too many ships, but we don’t have enough because of the trade patterns.

We will have a structural tightness in the LNG freight market probably for at least the next two years. Then of course we will face some decarbonization rules in the coming years. How that will affect the number of available ships is still a bit uncertain, but the general expectation is that a lot of the older steam tonnage will be replaced. You’ve already started to see that today with a number of steam ships being retired in a good market. We do think this is a trend. Steam ships will be obsolete, and I think most of them will be gone by 2030.

NGI: Given increasing efforts to better track and deliver carbon-neutral LNG cargoes, do you foresee any major hurdles for the shipping sector?

Kalleklev: I think the LNG shipping sector is most focused on carbon offsets. We have looked into it. We do see more and more people doing this. It also depends on what you’re offsetting, your Scope 1, 2 or 3 emissions. Most of the emissions of a cargo are related to the combustion of the cargo at a power plant, for example. The main issue with these voluntary offsets that have gained traction so far is this is a bit of an unregulated market with a lot of different qualities in these offsets. The price of these offsets also varies depending on the degree to which they’re certified and by whom they’re certified, but in general this is a trend that isn’t going away. LNG needs to decarbonize going forward.

NGI: It’s clear the LNG market is going to be tight through the winter, but do you expect to see similar volatility in the global natural gas market in the years ahead, especially as the energy transition unfolds?

Kalleklev: LNG is on this path to commoditization. In general, commodities are very volatile by nature because demand goes up and down, or volumes are being priced at the margin. I do think volatility is here to stay. The volatility we see today is being amplified by policy. We have this kind of dilemma where all these economies are pushing ahead with the energy transition very quickly without having very good energy alternatives. These policies have also discouraged investments in hydrocarbons. When you put all this together in a basket, it’s hard to see how things won’t be volatile. Volatility will probably be much higher in the future than what we have experienced in the past.