Connecting the wells only addresses part of the problem with flaring of natural gas in North Dakota’s Bakken and Three Forks formations; it’s no help if there’s a lack of takeaway and processing capacity. 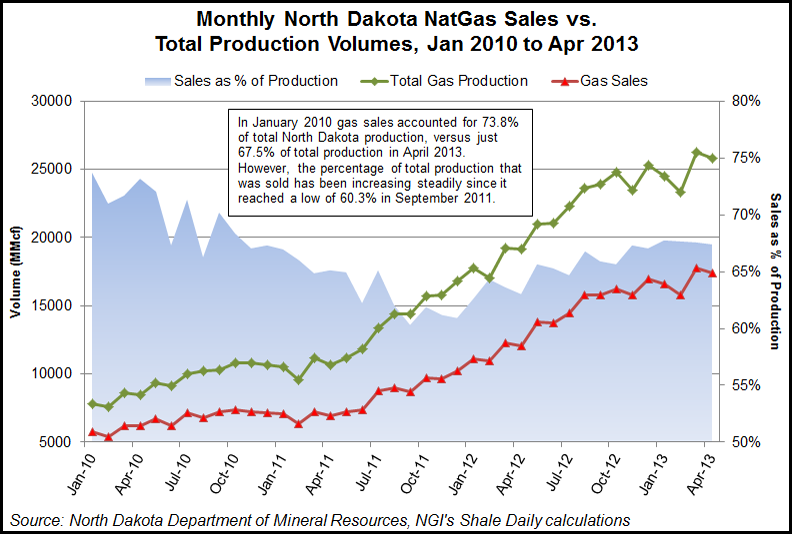 Even though more pipeline and processing infrastructure has been added at a fever pitch, the older pipes and processing capacity can’t keep up with the accelerated production growth, said Lynn Helms, the state Department of Mineral Resources director. That growth has continued even with a spate of severely bad weather in North Dakota this past winter and spring (see Shale Daily, June 17).

And crews returning to the field as the weather moderates are expected to spark a July and August surge in production that could make the problem even worse. Helms said everyone is pointing toward hitting 800,000 b/d this summer, which will bring on additional volumes of associated gas.

“The wells are connected, but they are still flaring, and this means the big compressor stations and the pipeline expansions are lagging behind,” said Helms.

“It is good to see the adding of miles of pipelines and processing plants get some traction, and hopefully during the summer we’ll see the number of connected wells grow even more [from 100 to 200 wells/month], but the other part of the equation is that the Bakken and Three Forks just continue to surprise people in terms of productivity and in terms of gas production,” Helms said.

As result, the gathering systems built a few years ago are now inadequate, he said. “We’re finding those systems are just too small.” Added compression and expanded pipes are needed.

“A lot of work that put pipe in the ground over the last few years is going to have to be repeated, and that is why we are still flaring at 29%,” Helms said. The goal is to get flaring below 10%.

For oil, rail transportation shot up to account for 75% of shipments in April, but state Pipeline Authority Director Justin Kringstad cautioned that this could begin to come down if current price differences between the Midcontinent and the East and West coasts continue to narrow. If that continues, he expects the percentage of shipments by pipeline to increase.

Helms also commented on the federal Bureau of Land Management (BLM) extending the comment period on its draft hydraulic fracturing rules, noting that some improvements have been made so far in the comment period, but in his opinion there is still a long way to go to have North Dakota able to embrace them. The new deadline for comments is Aug. 23, he said.

“There have been some very significant improvements, but they didn’t go far enough,” said Helms, noting that his state has had telephone conferences with BLM officials and will continue to try to do so. “We anticipate that we are going to submit supplementary comments based on the conversations we have had.”

In January 2010 natural gas sales accounted for 73.8% of total North Dakota production, versus just 67.5% of total production in April of this year, according to NGI’s Shale Daily calculations. However, the percentage of total production that was sold has been increasing steadily since it reached a low of 60.3% in September 2011.