FERC on Thursday authorized Kinder Morgan Inc. to start service and export operations from its tenth and final unit at the Elba Island liquefied natural gas (LNG) terminal in Georgia. 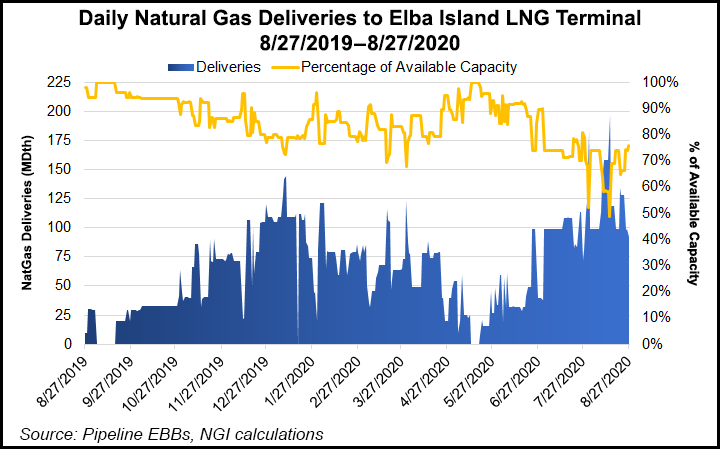 The move essentially marks the end of the first wave of U.S. LNG export projects that got underway in early 2016 when the first cargo was shipped from Cheniere Energy Inc.’s Sabine Pass terminal in Louisiana.

Elba, initially designed to import gas, shipped its first export cargo last December. Since then, the facility has been working to bring on all 10 of the movable modular liquefaction systems, smaller units that can be disassembled quickly and moved.

Unit 2 remains offline, however, after a fire erupted in a mixed refrigerant compressor in May. Kinder spokesperson Katherine Hill said Thursday that an investigation into the cause of the fire is still ongoing, but the company expects to complete it soon, at which time it will have a better idea of when the unit can come back online.

The first wave of domestic LNG exports has resulted in more than 10 Bcf/d of liquefaction capacity. The Federal Energy Regulatory Commission has approved 15 more newbuild and expansion projects that are not yet under construction.

In addition to new trains already under construction at existing facilities, both Calcasieu Pass LNG in Louisiana and Golden Pass LNG in Texas are underway and slated to come online by 2022 and 2024, respectively, as the second wave is set to be completed in stages over the coming years.