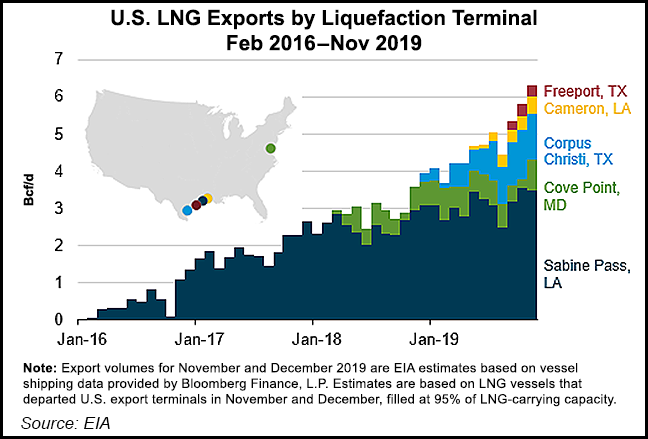 After commissioning the first five of 10 small liquefaction trains and battling through mechanical issues, the cargo left late Friday (Dec. 13). KMI spokesperson Melissa Ruiz told NGI that after problems with valves in the loading arms at the facility, crews moved the ship to an alternate dock to expedite the transfer of LNG from the terminal to the vessel.

Feed gas deliveries to U.S. LNG terminals remained high in the days before the milestone at Elba Island and were at about 8.24 Bcf/d on Monday, according to NGI’s LNG Export Tracker.

The elevated volumes come after a busy stretch for U.S. exports, which increased during the week ending Dec. 11. Fourteen vessels, including seven from Sabine Pass, two each from Corpus Christi, Cameron and Freeport, along with one from Cove Point, left the country with a combined carrying capacity of 51 Bcf. That’s up from the previous week when 10 ships carrying 36 Bcf left U.S. shores, according to the Energy Information Administration.

Elsewhere along the Gulf Coast, ExxonMobil Corp. and Qatar Petroleum were granted an in-service extension for their Golden Pass LNG export project in Texas. The partners now have until 2026 to build their 16 million metric tons/year (mmty) terminal. The companies filed the request at FERC in October, citing permitting delays.

Meanwhile, on the West Coast, privately-held Puget Sound Energy last week obtained a regional air quality approval to build a $275 million LNG storage and marine transportation project in the Port of Tacoma, WA, south of Seattle. Chevron Corp. also announced last week that it is evaluating strategic alternatives for its stake in KM LNG, which is planned for Kitimat in British Columbia.

In other U.S. news, McDermott International Inc., the engineering, procurement and construction contractor that’s played a strong role in developing LNG terminals along the Gulf Coast, said it has received a delisting notice from the New York Stock Exchange (NYSE). The company now has six months to regain compliance. NYSE requires that listed companies maintain an average closing share price of at least $1.00 over a consecutive 30 trading-day period. McDermott said it intends to regain compliance.

The global market for LNG remains wobbly. At one point last week, according to ClipperData, there were 18 LNG vessels still loaded and floating across the world, a grim sign for sellers of the super-chilled fuel. Nine of those were near the United Kingdom, said ClipperData’s Kaleem Asghar, director of LNG Analytics. “It’s a very high number,” he added.

Data analytics firm Kpler also noted on Friday that windy weather in the United Kingdom was making it difficult for some vessels to unload.

But while there has so far been cold weather across Europe, the season has been weak compared to years past. European natural gas storage was at 88.5% capacity on Friday, compared to 77% of capacity at the same time last year.

European LNG inventories, meanwhile, were at 60% capacity on Friday, compared to 64.5% last year. The send-out level from European terminals was high on Friday as well, Asghar said, averaging 12.2 Bcf/d over the previous seven days, versus an average of 8 Bcf/d over the same period last year.

While colder weather was supporting those volumes, Asghar told NGI that the terminals “are making sure to keep inventory levels as low as possible to take more cargos in.”

Prices in the Asian market inched upward toward the end of last week as prices in Europe came under pressure, opening an arbitrage window for traders to take advantage of the imbalance in prices.

The maximum Gulf Coast LNG netback price for January between the JKM, NBP and TTF on Friday (Dec. 6) was $3.699/MMBtu, or just $1.403 above where Henry Hub futures settled, according to NGI data.

“The moment that the current shopping spree among Northeast Asia customers is over, that arbitrage window is expected to close,” Asghar said.

In China, where the market has been particularly weak for U.S. cargos amid an ongoing trade war, terms reached over the weekend to ease part of the spate don’t involve LNG duties. China and the United States agreed to reduce some tariffs, but the 25% tariff on U.S. LNG shipments to China remain in effect.