Close to 77% of the total natural gas and oil produced in the Gulf of Mexico (GOM) remained offline Wednesday, more than 10 days after Hurricane Ida slammed into the heart of Louisiana’s energy home base in Port Fourchon. 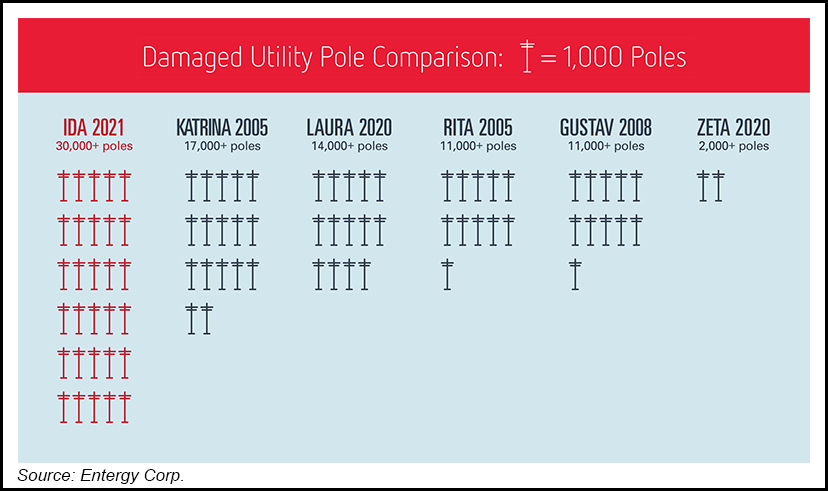 The Interior Department’s Bureau of Safety and Environmental Enforcement (BSEE) in a midday update said 77.25% of the gas, or around 1.723 Bcf/d remained offline. In addition, 76.88% of the oil produced from the offshore, or around 1.399 million b/d, also was shut in.

Crews were still evacuated from 73 production platforms, or around 13% of the manned infrastructure that remains in the same location throughout a project’s duration. Four moored rigs also remained unmanned, equivalent to around 36%. In addition, two dynamically positioned rigs, which are unmoored, had not returned to their drilling locations.

The damage to some offshore structures, combined with the destruction and lack of electricity along Louisiana’s onshore, have stalled efforts to get gas and oil production restarted.

Shell, the most active operator in the GOM, was redeploying crews to the Auger platform and Enchilada/Salsa facilities. However, Shell’s deepwater facilities that were in Ida’s path remained offline.

“Approximately 80% of Shell-operated production is currently offline,” the operator stated. “Our inspections on board confirm that there is no significant structural damage to these Shell deepwater assets impacted by the storm. Our crews will focus on making any necessary repairs in a safe, sustainable manner.”

“We are working to understand the full extent of the damage and the degree to which production in the Gulf of Mexico will be impacted,” the company said.

Meanwhile, Shell’s Ship Shoal 28 facility has been restaffed, and crews were finalizing an assessment of the platform and pipelines. A standup test was to be conducted before the pipeline resumed operations. In addition, starting up the platform “will remain dependent on the availability of downstream infrastructure including pipelines and delivery locations.”

Shell said it also was continuing to assess the impacts to the Norco, LA, manufacturing facility, which was without electrical power. The plant also remained in “the elevated flare with visible smoking,” the company noted.

“We are continuing to complete repairs and are making visible improvements to minimize flaring until power is restored. Air monitoring is being conducted on the fence line and we are utilizing a third-party resource for air monitoring in the community. We will continue this monitoring through the duration of this event.”

BP has resumed operations at the Atlantis and Mad Dog deepwater platforms. Operations were expected to resume at Thunder Horse and Na Kika “in the coming days,” it noted. “We cannot predict how long this process will take.”

Repairs also were underway at BP’s Louisiana properties in Houma and Port Fourchon. In the interim, the shore base was relocated to Galveston, TX, and the heliport was relocated to Lafayette, LA.

The Port Fourchon and Houma region, which serve as a staging area for more than 200 offshore oil and gas operators, remained in damage control on Wednesday, according to the Greater Lafourche Port Commission.

The roadways were clear to and within Port Fourchon. The main channel at Belle Pass opened last Friday. However, “multiple obstructions” remained in the channel, stalling overall recovery efforts. In addition, many of the people who work in the region continued to deal with personal recovery efforts.

“Be prepared to be self-sufficient in Port Fourchon,” the commission said in an update. “There is no power, and Entergy’s estimated restoration date for Lafourche Parish is Sept. 29. There is currently little to no running water. There are no gas stations or restaurants currently open. Access is limited to parish curfew hours.”

Nearly 378,000 customers in Louisiana still were waiting for their power to be restored as of early Wednesday, according to the U.S. Department of Energy (DOE).

Entergy Corp. was expecting full power restoration in New Orleans East and Orleans Parish before the end of the day.

However, most power restoration for the hardest hit areas, all in southeastern Louisiana along the coast, was likely “to extend into the latter half of September,” DOE said. Areas impacted include portions of Assumption, Lafourche, Plaquemines, St. Charles, Terrebonne and lower Jefferson parishes.

“​​Widespread power outages, fuel shortages and high demand are leading to retail gas station outages in impacted areas…Resupply may be impeded by power outages at terminals. Heavy traffic in some areas is also delaying resupply efforts.”

All three refineries in the Baton Rouge area and one near New Orleans with 1.3 million b/d of refinery capacity had initiated restart processes. Still, DOE warned that the refiners “will not produce at full rates for several days.”

Operations cannot restart “until feedstock supply, power and other essential third-party utilities are restored,” DOE noted. “Fuel stocks in the area are being drawn down from storage while refineries and offshore production are restored.”