ExxonMobil Corp. shareholders achieved a small amount of satisfaction on Wednesday when a proxy measure allowing outsiders to be nominated to the board was approved at the annual meeting, but otherwise, measures that would have required the oil major to be more transparent in its onshore drilling and to change how reserves are reported were soundly rejected. 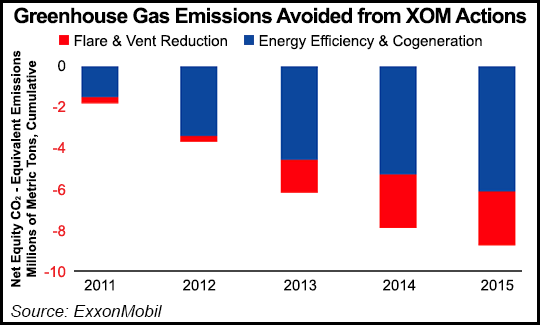 CEO Rex Tillerson and the board opposed the so-called proxy access measure, Item No. 7, which was approved by 61.9%. The measure, the only shareholder proxy item to be pass, was proposed by New York City’s Employees’ Retirement System, Fire Department Pension Fund, Teachers’ Retirement System, Police Pension Fund and Board of Education Retirement System. Measures defeated included calling for more transparency on climate change, hydraulic fracturing (fracking), lobbying and how reserves are reported.

A proxy access measure in 2015 received 49.40% of votes cast. Similar bylaws have been adopted by more than 80 companies, including Chevron Corp. Similar fracking measures at ExxonMobil have been defeated for several years.

Tillerson presided over the annual meeting in Dallas, an event that lasted close to three hours. Sturm and drang were expected to be the order of the morning, as the world’s largest publicly owned oil and gas company faces allegations that it misled investors about how its operations may impact climate change. The New York attorney general (AG) is leading an investigation into the fraud allegations, which ExxonMobil has rejected (see Daily GPI, Nov. 5, 2015).

Shareholders who spoke were civil, but they challenged Tillerson again and again on why ExxonMobil doesn’t embrace climate change and revamp its operations. Management doesn’t disagree that climate change is real, he said. But ExxonMobil management lives in the “real world.”

There is “no room” between ExxonMobil’s stance and that of the United Nations’ Intergovernmental Panel on Climate Change (IPCC), he said. The IPCC two years ago concluded that even with global policies to reduce the effects of climate change, greenhouse gas emissions had risen to unprecedented levels and urged strategies be taken (see Daily GPI, April 4, 2014).

“My view on the competency of the models has really not changed,” Tillerson said. The IPCC panel following the Paris climate accord last December was asked if there was a scientific basis for the 2 degree C target.

“I’m going to paraphrase it, the answer is ‘no.’ There’s no scientific basis for the 2 C target,” Tillerson said of the IPCC’s findings. The target was “chosen by society in a general consensus process. I take no exception to that. We can set the science apart from what we as a society are going to choose to pursue as a matter of policy…There’s no space between us and IPCC. We see the science the same way.

“Our difference on policy choices are, I think, one that is grounded in reality. And the reality is, there is no alternative energy source known on the planet that is available to us today to replace the pervasiveness of fossil fuels in our global economy and in our very quality of life — and I would go beyond that and say our very survival.”

The judgment is a “balance between future climatic events, which could prove to be catastrophic — but are unknown by the IPCC’s own acknowledgement — and more immediate needs of humanity today to address poverty, starvation, broad-based disease control and the quality of life that billions of people are still living in today, which is unacceptable to many of us.”

The “only way out of that is to provide them the energy sources we have today,” Tillerson said. “And that’s why we continue to believe fossil fuels will have a significant and important role to play for as far as we can see. No government studies disagree with that.”

The second question is what to do about it.

For more than three decades, he said, ExxonMobil has focused research efforts on how to provide people the capabilities to use fossil fuels and energy sources in a less impactful way. In the early days of research, ExxonMobil invested in energy efficiencies, and that effort is still underway. Today, investigations have advanced on carbon capture sequestration methods, including a breakthrough recently announced (see Daily GPI, May 6). The company is collaborating with FuelCell Energy Inc. on carbon capture to reduce emissions from power plants that burn gas and coal.

“If in fact our view turns out to be true, the world is going to have to continue to use fossil fuels, whether they like it or not, but if we can achieve a breakthrough on carbon capture sequestration, we can continue using fossil fuels, capturing the carbon in an economic way, and sequestering it,” Tillerson said.”That is a huge if, but it’s also a huge breakthrough that would change things dramatically.”

ExxonMobil “is not ignoring the risk that is out there…I don’t think we see it all that differently,” he said to a shareholder who criticized the company’s climate change efforts. “Our differences are in how we think we’re going to address it. Again, we are grounded in the reality of the world we live in today and what is known technologically to us today.”

Tillerson pointed to a recent endeavor undertaken by Microsoft founder Bill Gates, whose focus today is in reducing global poverty. Gates “would come to the same conclusion. He and I have had this conversation. There’s no space between he and I on this either. We’ve got to have some technology breakthroughs, but until we achieve those, just saying ‘turn the taps off’ is not acceptable to humanity.”