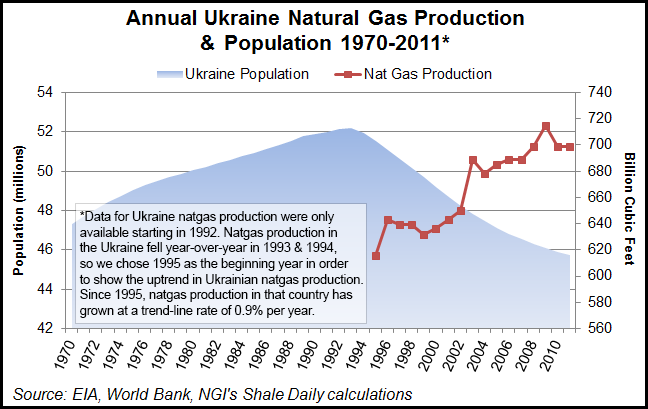 In an interview with the Russian newspaper Kommersant, ExxonMobil European exploration director Kevin Biddle said the company will invest $325 million initially in Ukraine, should both sides sign a production sharing agreement.

“This allows us to convince the shareholders that investment in this country can generate return,” Biddle said, adding that ExxonMobil’s investment in Ukraine could grow to billions of dollars, should the company discover oil and gas.

ExxonMobil is currently preparing to explore the Skifska gas field in the deepwater Black Sea. The company has 2D exploration data from the field and is awaiting 3D data as well. ExxonMobil, Royal Dutch Shell plc, Romania’s OMV Petrom SA and Ukraine’s Nadra received joint rights to develop the field in August 2012.

The Skifska field is adjacent to Romania’s Neptune block, where ExxonMobil and OMV Petrom have a joint venture. According to OMV, preliminary estimates from an exploration well in the Neptune block, Domino-1, shows the block could hold 42-84 bcm (1.48-2.97 Tcf) of natural gas.

Annual natural gas production in the Ukraine is fairly modest when compared to the rest of the world, coming in at just 699 Bcf in both 2010 and 2011, the most recent two years on record. The 2011 total made the Ukraine the 34th largest global producer of natural gas that year, according to the Energy Information Administration’s International Energy Statistics. Despite the fact that Ukraine’s population has declined steadily since the fall of the Soviet Union in 1991, the country can use every molecule of gas it produces for its own internal use. The Ukraine imported anywhere between 1.0 Tcf and 2.2 Tcf of natural gas per year in 2008-2011, with very little gas leaving the country via exports during that time.