It’s no exaggeration that the shale gas boom has “momentous” implications and it is “revolutionary” in an historic perspective, according to ExxonMobil Corp.’s Paul Greenwood, who spoke Tuesday at the LDC Gas Forum Midcontinent meeting in Chicago. 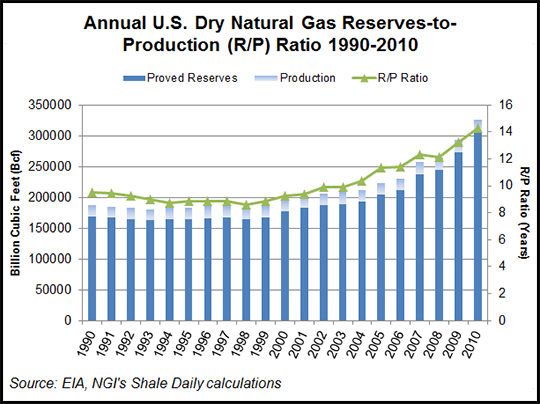 Citing massive increases in unconventional gas supply reserves across the globe, Greenwood, ExxonMobil gas marketing manager for the Americas, said the industry for decades knew all about shales, but it took technology advances and innovation from industry pioneers such as Houston’s George Mitchell to create “systematic and cost-effective” ways to get at shale supplies. Mitchell and a whole army of geologists and petroleum engineers that followed have unleashed the revolution, he said.

As a result, ExxonMobil today has 30,000 locations identified for shale development and hundreds of other companies have tens of thousands more, Greenwood said. There are 15,000 wells in U.S. shale plays today producing 20 Bcf/d, he said.

“Those of you familiar with a conservative company like mine know that we don’t usually use words liked ‘momentous’ or ‘revolutionary’ very often, but it is a fact that our industry is going through a period of momentous change.” Greenwood cited worldwide statistics that show a 250-year supply of natural gas based on current consumption levels: up to almost 30,000 Tcf, which he said has increased from a 20,000 Tcf estimate in 2008.

The executive added that North American natural gas reserves — proved, probable and possible — have more than doubled since 2008: from 2,300 Tcf to 4,800 Tcf.

What it all adds up to both in the United States and globally is “jobs and wealth creation,” said Greenwood, noting that while all the heightened activity grows, U.S. researchers are still finding new ways to more efficiently drill in a more environmentally responsible fashion.

“The technology continues to advance today, lowering costs, making more supplies economic and improving environmental safeguards. All of this helps create hundreds of thousands of new jobs, and that further reverberates across the economy to hotels, restaurants and supports states and local government with billions of dollars of royalties and tax revenue.”

On the demand side globally, natural gas will play an increasingly large role, second only to oil, during the next 30 years, said Greenwood. But it will take all forms of energy, including coal (albeit declining steadily) and nuclear, to meet the world’s growing energy appetite. ExxonMobil estimated a better than 2% annual growth in demand for gas with the electric generation sector leading the charge.

Continuing efficiency improvements in the United States will keep overall demand flat through 2040, but the share of natural gas will continue to grow steadily, driven mostly by the increase in power generation’s use of gas, Greenwood said. For transportation, he sees liquid fuels (gasoline and diesel) continuing to dominate, and natural gas playing an increasing role among fleets and heavy-duty trucks and buses.

Even with flatter demand domestically, the U.S. gas industry should prosper with the prospect for exports of supplies and the increased demand for the service industry’s expertise in helping tap unconventional gas supplies around the world. “The United States is leading the world in developing these unconventional energy resources, and this is where the great expertise lies,” Greenwood said.