An activist investment firm prodding ExxonMobil to boost its alternative energy holdings and improve management oversight on Wednesday formally nominated four people to the board, in time for consideration ahead of this year’s annual meeting. 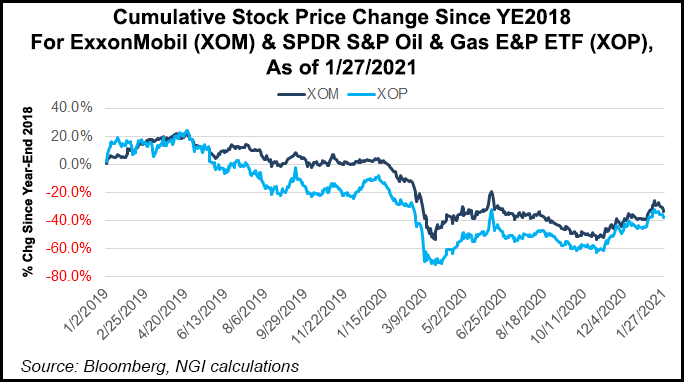 “Investors increasingly want to see companies focused on the long-term, and ExxonMobil is no exception,” Engine No. 1’s management team stated.

“We believe that ExxonMobil’s board needs new members who have proven success positioning energy companies for today as well as tomorrow, and who are sufficiently independent from the current board to ensure a clean break from a strategy and mindset that have led to years of value destruction and poorly positioned the company for the future.”

Gregory J. Goff was CEO of refiner Andeavor and its predecessor Tesoro until 2018, while Kaisa Hietala was at refiner Neste until 2010 as executive vice president of Renewable Products. Nominee Alexander Karsner is senior strategist at X, formerly Google X, the innovation lab of Alphabet Inc. Anders Runevad served as CEO of Vesta Wind Systems for six years until 2019.

ExxonMobil recently “has taken incremental steps in the face of financial and shareholder pressure,” Engine No. 1 said, but “we believe a reactive short-term approach is no substitute for a proactive long-term strategy that addresses the threats and opportunities facing the company in a changing world.”

The board nominees each bring “a differentiated skill set that makes them uniquely suited for this challenge” to help the board “chart a new value-creating path, including better long-term capital discipline, strategic planning and management incentives.”

ExxonMobil said it would evaluate the nominees “in the coming weeks” as it advances its strategy “to build long-term, sustainable value for shareholders.” The Irving, TX-based operator also said it would provide updates on “performance and actions to address climate change, including initiatives to commercialize technologies which are key to reducing emissions and meeting societal goals consistent” with the United Nations climate accord, aka the Paris Agreement.

Engine No. 1’s principals have called on ExxonMobil to use “more stringent approval criteria for new capital expenditures, including lower required break-even oil and gas prices.” In addition, they want “more significant investment in clean energy” and an overhaul of management compensation.

ExxonMobil reportedly also is in talks with another activist investor, D.E. Shaw Group, which could support Engine No. 1, according to The Wall Street Journal.