ExxonMobil needs to enhance its long-term value by revamping the board, imposing capital discipline, investing in more sustainable energy and overhauling management compensation, according to a new investment firm. 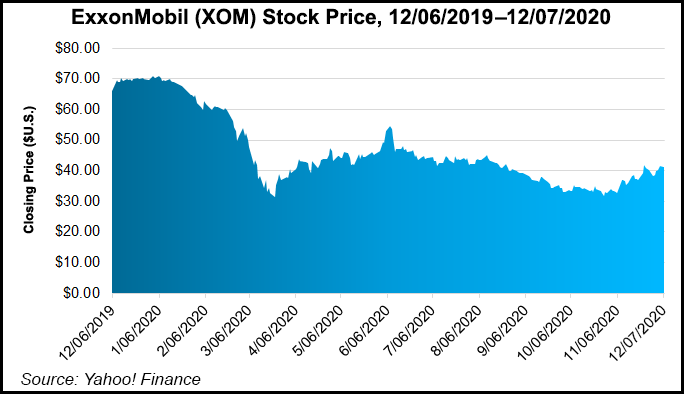 San Francisco-based Engine No. 1, which said it seeks to build long-term value through “active ownership,” on Monday said it would nominate four independent candidates to the board at the 2021 annual meeting to advance its plan.

The letter to the board outlines proposed changes to “evolve with changing industry dynamics.” Besides adding independent directors, Engine No. 1 principals want ExxonMobil to use “more stringent approval criteria for new capital expenditures, including lower required break-even oil and gas prices.” In addition, they called for “more significant investment in clean energy” to ensure it commits to emission reduction opportunities. Also on the list is an overhaul of management compensation.

“We believe that for ExxonMobil to avoid the fate of other once iconic American companies, it must better position itself for long-term, sustainable value creation,” said the letter from Engine No. 1, which was founded by Chris James, who previously founded Partner Fund Management and co-founded Andor Capital Management.

“Doing so will not be easy and will require a board with a diversified level of insight into the evolving trends, technologies, markets, and policies shaping the future of the industry, yet none of ExxonMobil’s independent directors have any other energy industry experience. This is not a criticism of any director, each of whom is highly accomplished and respected, including by us. It is instead an acknowledgement of the unique challenges facing ExxonMobil and the industry.”

Following an annual strategic review by the board in late November, the Irving, TX-based energy major revised its capital spending outlook and production forecast to 2025. ExxonMobil has, among other things, backed off ambitious goals to increase spending and has cut the book value of some assets, particularly the U.S. dry natural gas portfolio, by up to $20 billion.

“No company in the history of oil and gas has been more influential” than ExxonMobil, said the Engine No. 1 principals. “It is clear, however, that the industry and the world it operates in are changing and that ExxonMobil must change as well. While the entire industry has faced steep declines, ExxonMobil stands apart.”

The California State Teachers’ Retirement System (CalSTRS), which owns more than $300 million in ExxonMobil stock, has aligned with Engine No. 1’s goals.

“It is time to demand change at ExxonMobil,” said CalSTRS Chief Investment Officer Christopher Ailman. “CalSTRS’ stewardship activities date back over 30 years and reflect our focus on influencing long-term value creation. We intend to use our vote as an active shareholder to support Engine No. 1’s slate of directors because a change at the top is necessary to reposition this company to be successful for the long-term.”

Engine No. 1 said its investment philosophy is to “create long-term value by harnessing the power of capitalism. We believe a company’s performance is greatly enhanced by the investments it makes in workers, communities and the environment. We believe that over time the interests of Main Street and Wall Street align, and we can engage as active owners to create value by focusing on this alignment.”

The slate of candidates Engine No. 1 is proposing includes Gregory J. Goff, who until 2018 was CEO of Andeavor. He also spent nearly 30 years with ConocoPhillips.

Other candidates are Kaisa Hietala, Alexander Karsner and Anders Runevad. Hietala until 2019 was for five years executive vice president of Renewable Products at Neste, a petroleum refining and marketing company. Karsner, with more than 30 years of global conventional and renewable energy experience, is senior strategist at X, formerly Google X, the innovation lab of Alphabet Inc. Runevad served as CEO of Vestas Wind Systems for six years until 2019.