U.S. liquefied natural gas (LNG) exports are not to blame for the sharp spike in Henry Hub prices, according to a leading trade group. 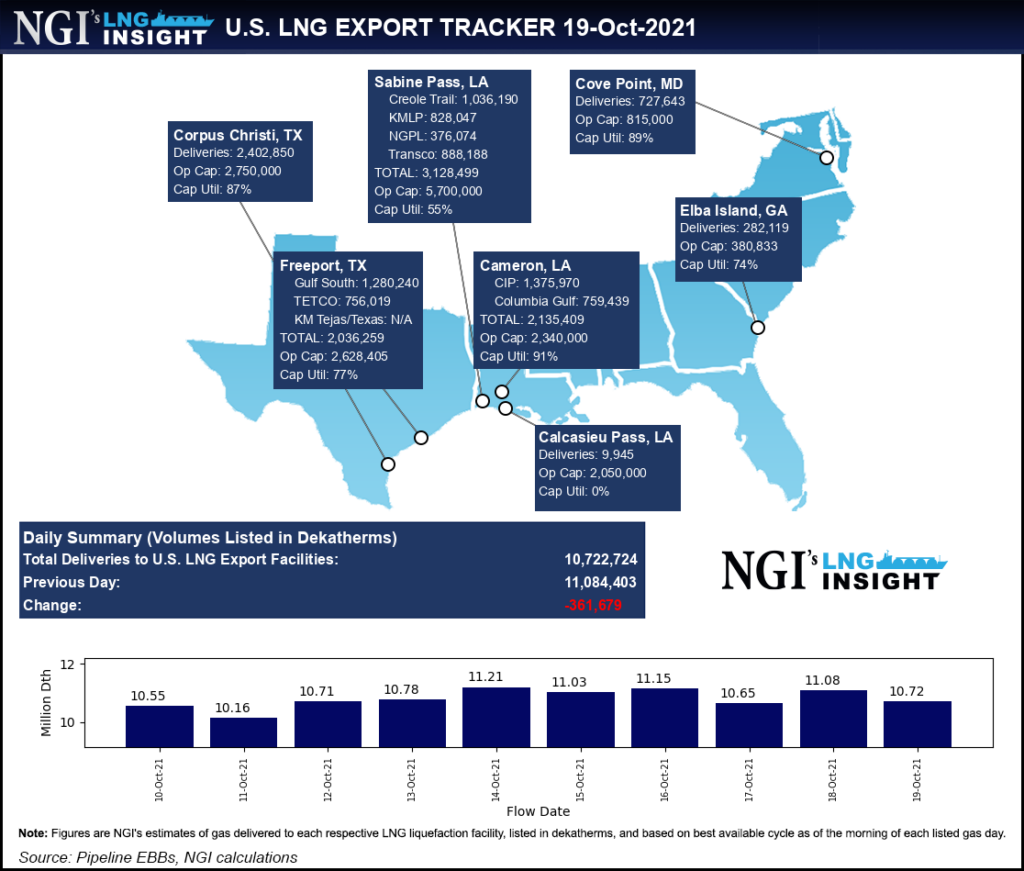 “The idea that LNG is having some outsized impact on price is mathematically impossible when we actually start to dig into this,” said Executive Director Charlie Riedl of the Center for LNG (CLNG). “What we’re talking about is 10% of U.S. natural gas demand comes from LNG.”

Riedl made his comments at the LDC Natural Gas Forum in New Orleans last week, primarily in response to the Industrial Energy Consumers of America (IECA). Last month, IECA revived an argument by calling on the Department of Energy (DOE) to reduce export rates and review permits for new projects to prevent domestic gas prices from spiking further. U.S. prices have more than doubled over the last two months.

“Excessive LNG export volumes are inflationary and threaten the competitiveness of trillions of dollars of manufacturing capital assets, millions of jobs, and economic growth by driving up the cost of natural gas, natural gas liquids feedstock, and electricity,” IECA wrote in a letter to the DOE. “This also presents a threat to reliability, national security, and is a cost and human safety issue.”

Curtailing LNG exports this winter wouldn’t impact prices at home, Riedl said. However, it could cause undue impacts on future LNG supply deals and lead to even more uncertainty in the global gas market, he said.

“What I would suggest is that is a difficult argument to make given that we have contractual obligations with buyers to provide gas that the DOE has authorized,” he said of IECA’s claims.

U.S. export terminals are running near nameplate capacity at about 11 Bcf/d as gas prices across the world have hit record prices amid a lack of supplies. There are six domestic terminals in operation. A sixth train at Cheniere Energy Inc.’s Sabine Pass plant, along with the Calcasieu Pass LNG project in Louisiana, are soon expected to come online and boost export capacity to roughly 12 Bcf/d.

“If we were to halt any future projects, it would really have no impact,” Riedl added. “All it would do is raise questions about the reliability of U.S. gas on an international level, which has really been a foundational component of why U.S. LNG has become so popular.”

Reidl said when buyers ink deals under long-term contracts for American supplies, they’re essentially getting a “guarantee” that the gas is going to be there. That’s one reason why the U.S. government must be “crystal clear” in its messaging about the security of both natural gas and crude exports — to help stabilize commodity markets.

“There’s a natural gas shortage around the world, hence the need for the United States to continue to export natural gas,” said White House Press Secretary Jen Psaki at a briefing last week.

Total working gas in U.S. storage as of Oct. 8 stood at 3,369 Bcf, which is 501 Bcf below year-ago levels and 174 Bcf below the five-year average, according to the Energy Information Administration. However, Reidl said producers are slowly responding to the jump in prices, pointing to some of the larger storage builds in recent weeks.

U.S. gas prices have also moderated somewhat on milder weather, but given flat production, the global energy crisis and the potential impacts of a colder-than-normal winter, they could go higher.

“The U.S. can only export so much gas, we cannot build facilities fast enough to respond to demand for this winter,” Reidl said of the global market. “From a domestic standpoint…we’ll have enough gas. We have plenty of gas here for the winter. We’re not going to have the gas scarcity issues that Europe and Asia are likely to experience this winter.”