Leases for oil and gas development along the southern fringe of the Piceance Basin in western Colorado are nearing their expiration as a citizens’ action and the federal Bureau of Land Management (BLM) are blocking five exploration/production (E&P) companies, including a unit of Encana Corp.’s U.S. operations, spread over a five-county area. 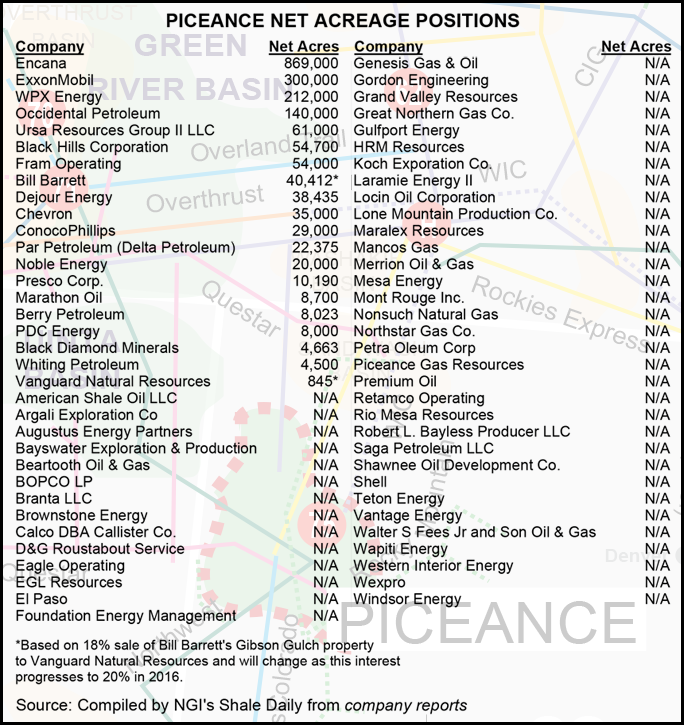 The Thompson Divide Coalition told local news media that it can raise $50 million to buy leases covering potential energy development on 220,000 acres of high-country public land on the western slope. Some of the acreage is prospective for the Mancos Shale located in the southern Piceance Basin.

Encana, which is the largest leaseholder in the Piceance, has three federal leases covering 5,242 acres that were issued in 2003-04 and expire next year and 2014, an Encana (USA) spokesperson told NGI’s Shale Daily. “We have repeatedly told [the coalition] that we have no interest in developing these leases,” the spokesperson said.

Earlier this year, the coalition offered to buy back the leases, but with conditions that the E&P company could not support — a purchase price of $435,000, payable 120 days after Encana agreed to sell, but with the disbursement of the funds contingent on federal legislation permanently protecting Thompson Divide. Encana “respectfully declined” in April, and has noted that the leases in question are “nonproducing” leases.

“What the coalition is engineering is a pathway to run out the clock on our member company leases and tying the hands of the BLM state office by not allowing that office to make simple administrative decisions on unit applications,” said David Ludlam, spokesperson for the western slope branch of the Colorado Oil and Gas Association.

The Thompson Divide’s geography includes five counties — Pitkin, Gunnison, Garfield, Mesa and Delta — some of which have joined forces with the wealthy ranchers and sportsmen who are urging BLM officials in the Obama administration in Washington, DC, to block the prospective E&P exploratory drilling.

Some of the operators have been told by the state BLM that they may have to go back and re-do the environmental reviews done almost a decade ago when they secured the leases, many of which are scheduled to expire next year.

“The end-game here by the coalition is to run out the clock on our companies leases, and take the federal land management issues off the table permanently,” said Ludlam, noting the a acreage in play includes the Wolf Creek storage field that provides natural gas in the winter to a broad range of affluent communities, including Aspen and Carbondale, CO.

“The potential work is exploratory in nature because operators are trying to determine the potential for the Mancos Shale that exists in the southern Piceance.”