European natural gas prices hit their highest point in months on Tuesday, extending a series of gains as the continent continues to face the threat of supply shortages on a number of fronts. 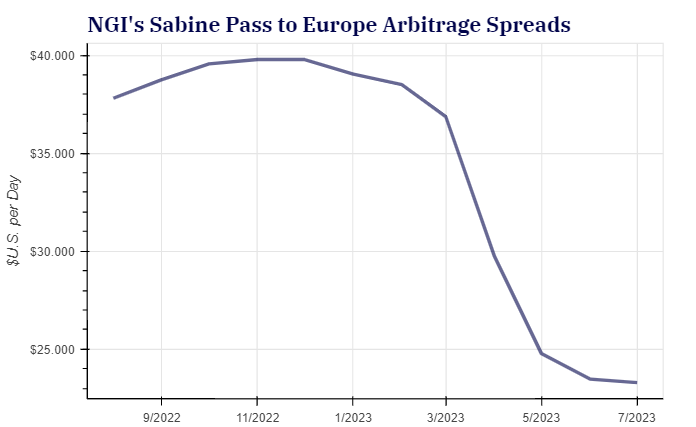 A prolonged shutdown of the Freeport liquefied natural gas (LNG) export terminal in the United States, reduced flows from Russia on the Nord Stream 1 (NS1) pipeline and now a labor strike that has shut down a chunk of Norwegian production are all pressuring the Title Transfer Facility (TTF) benchmark higher.

TTF has notched gains for the last three weeks. The benchmark hit its highest point in four months on Tuesday, when the August contract closed at nearly $50/MMBtu.

Freeport LNG said last week that partial service won’t return until mid-October. That’s a month later than previously expected. The facility again delayed a return to service as it works to comply with regulatory requirements to restart after an explosion at the terminal last month. The facility accounts for roughly 15% of all U.S. exports.

Meanwhile, the strike in Norway has shut down three gas fields serving Europe and another six fields could be shuttered in the coming days if the dispute isn’t resolved.

Perhaps the biggest threat facing the continent is the 60% decline in deliveries from Russia to Germany on NS1 that started last month. Gazprom PJSC has blamed the reduction on a lack of equipment needed to finish maintenance at a compressor station due to western sanctions against Russia for its invasion of Ukraine. The system is set to be taken offline entirely July 11-20 for annual maintenance.

German officials have aired concerns about losing all supply on the systeM – one of the largest serving Europe – even after maintenance ends.

“All eyes are on the situation surrounding Nord Stream 1, where flows have been significantly reduced,” said trading firm Energi Danmark in a note on Tuesday. “Traders fear that the pipeline will not come back online at all after a planned maintenance period later this month, something which would disrupt the supply picture even further.”

Analysts at Goldman Sachs Commodities Research this week revised their TTF price forecast higher as the repairs needed on NS1 have not been addressed and flows have not been rerouted since they were cut last month.

Compounding the outlook, Equinor ASA said Tuesday that another six oil and gas fields could be shut down by July 9 if the labor dispute isn’t resolved. The company has already shut down the Gudrun, Oseberg South and Oseberg East fields, which produce roughly 89,000 boe/d.

Schneider Electric said in a note to clients on Tuesday that Norwegian gas flows to the continent are set to drop by 13% in the coming days. Russia and Norway are Europe’s top natural gas suppliers.

Energy sector workers across the globe have pushed for higher wages amid soaring inflation and surging energy prices. Strikes in France last week limited some flows at the country’s second largest storage facility.

In Australia, Shell plc has been forced to cancel cargo loadings from the Prelude floating liquefaction facility until at least July 14 due to deteriorating negotiations with unions representing workers on the vessel. Offshore Alliance, a group representing the unions, said Monday that its members would vote on further action that could further stymie operations on Prelude in the coming weeks.

Asian LNG prices have also continued climbing. Both Japan-Korea Marker spot and futures prices have inched upward over the last week as the region is expected to compete with Europe for a dwindling pool of global supplies.

A heat wave has also boosted demand in North Asia, while Russia’s move to seize ownership of the Sakhalin-2 LNG export terminal north of Japan is seen threatening supplies as well.

The Kremlin also said Tuesday that it has not made a decision about whether to require Russia’s LNG buyers to make payments in rubles. Russia required the same for pipeline deliveries to Europe, where countries including Poland, Bulgaria and Finland, among other buyers, were cut off from supplies for failure to comply with the decree.

In other developments as the trading week got underway, QatarEnergy (QE) selected Shell as its fifth and final partner in the massive North Field East LNG expansion project.

QE said Shell would become a partner in a new joint venture company that would own 25% of the North Field East project.

In North America, New Fortress Energy Inc. said it has signed an agreement with Petróleos Mexicanos, aka Pemex, to develop the Lakach deepwater gas field offshore Mexico. NFE said it would invest in the Lakach field to develop seven offshore wells. NFE would deploy its Fast LNG technology to export the super-chilled fuel globally.

NFE is developing its Fast LNG technology around the world. The company claims it can be deployed more easily and at lower costs than conventional floating LNG technology. NFE also announced an agreement with Mexico’s Comisión Federal de Electricidad (CFE) on Tuesday to develop an LNG hub off the coast of Altamira, Tamaulipas. Under the deal, CFE would supply feed gas for two new NFE Fast LNG units.