Natural gas prices in Europe and Asia pressed higher last week, topping multi-month highs and continuing a bull run that has persisted for much of the spring. 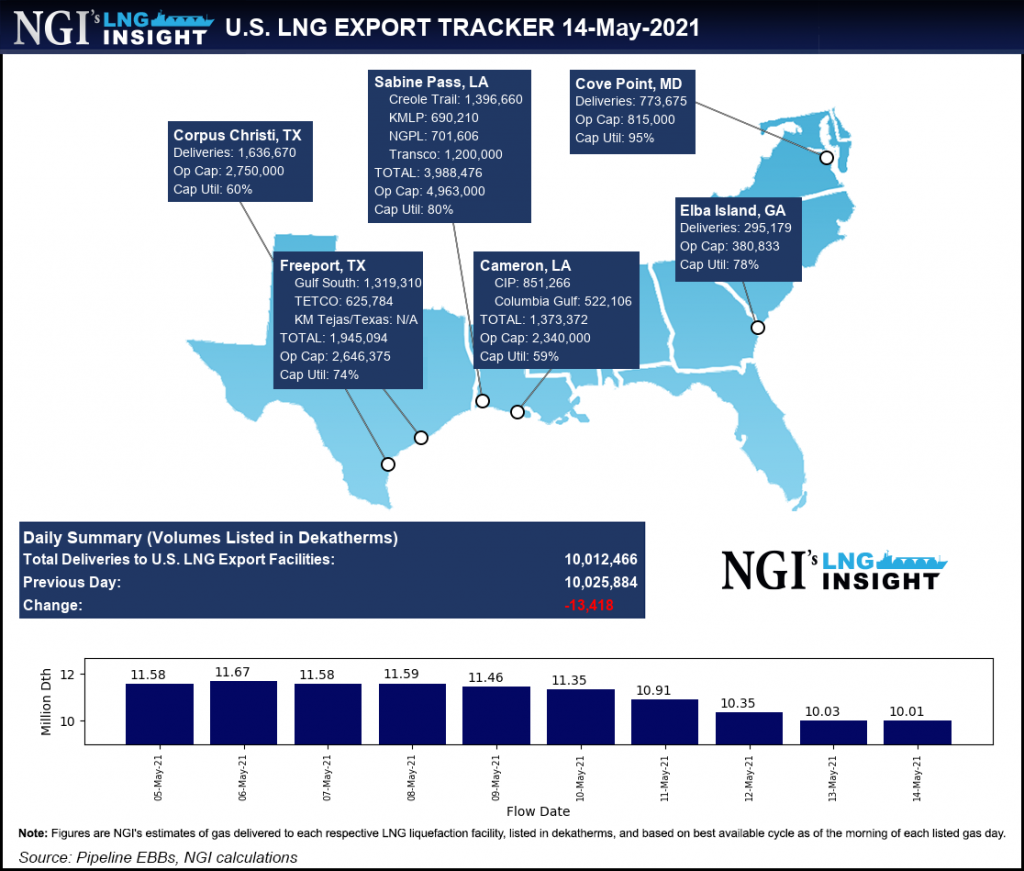 In Europe, prompt prices notched their third straight week of gains. The Title Transfer Facility contract broke through $9.00/MMBtu and closed well beyond that mark most of the week. The National Balancing Point was stable at over $9 and pressed higher throughout the week as Japan-Korea Marker (JKM) futures did too.

European storage inventories are around 32% of capacity, or 28% below the five-year average. Pipeline imports to the continent have remained low this spring. Last week, Norwegian maintenance further curbed pipeline flows, while Russia has continued to limit its deliveries to the continent despite higher prices as it looks to keep supply pressure on the market while it finishes work on the controversial Nord Stream 2 pipeline.

“With pipe imports more likely to seasonally decline through the summer rather than increase, it will likely take materially higher LNG imports if storage is to refill into the five-year range,” said analysts at Tudor, Pickering, Holt & Co (TPH).

They added, however, that the continent appears to be normalizing and coming closer to seasonal baselines after weeks of high natural gas demand. European gas consumption for May, TPH said, has averaged 33 Bcf/d, or just above the 31 Bcf/d norm for this time of year.

As demand remained steady, natural gas deliveries to U.S. LNG export terminals were down most of last week as the third train at Cameron LNG was taken offline for maintenance and a lightning strike that caused a power surge at Freeport LNG knocked the facility offline for several hours Wednesday. Wood Mackenzie analyst Amir Rejvani also noted in a note to clients that feed gas deliveries to Sabine Pass decreased Thursday for possible maintenance, but those volumes had ticked back up by Friday. Feed gas nominations are expected to climb higher this week now that the issues have been resolved and Cameron maintenance has concluded.

In the shipping sector, the tight global gas market created one of the busiest chartering months in the history of the LNG freight market, according to Braemar ACM. The shipbroker said about 60 fixtures occurred during April as charterers looked to secure vessels amid an unseasonable jump in prices.

“The surge in rates appears to be a function of uncharacteristically high gas prices in both the Far East and especially Europe, which in turn are subject to low storage levels and recovering demand, particularly in China,” Braemar analysts said.

Meanwhile, Brent crude futures finished with a week-on-week loss Friday as the Colonial Pipeline restarted in the United States limiting the outage’s impact to near-term prices. Rising Covid-19 case counts in India are also renewing concerns about the global economic recovery. Ports in eastern India have reportedly declared force majeure, but LNG terminals have not been impacted. Even still, the country’s spot LNG buying has declined amid the virus outbreak and higher prices.