Europe replaced Asia as the top destination for LNG exports from the United States in the first quarter of 2022 while pipeline gas exports to Mexico continued to grow, according to the latest trade scorecard compiled by the U.S. Department of Energy’s gas regulation division. 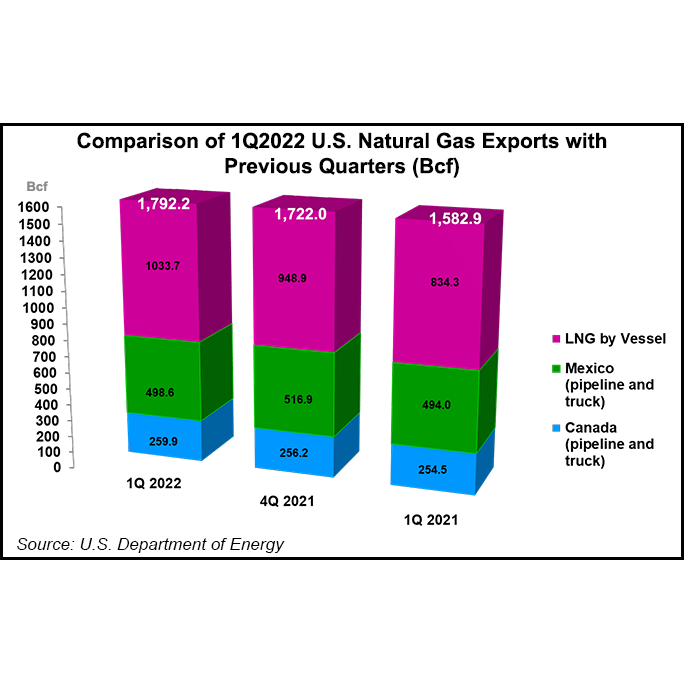 France, Spain, the United Kingdom, Turkey and the Netherlands combined imported 622.5 Bcf, or 60% of a total 1.03 Tcf of liquefied natural gas shipped from U.S. export terminals in 315 cargoes, the report showed.

The jump in shipments crossing the Atlantic came in response to steep price increases as Russian pipeline deliveries declined and the continent has looked to diversify supplies that have been jeopardized by the war in Ukraine.

The American LNG flow across the Atlantic also reached, in smaller volumes, Greece, Croatia, Lithuania, Italy, Malta and Poland, according to DOE records.

With the winter season nearing, however, Asian prices are on the rise in a bid to attract more U.S. LNG to the region. In the northeastern stretches of Asia, in particular, there are signs cargo arrivals to Asia now could be on the rise, with Japanese and Korean firms boosting their purchasing.

The unquenchable thirst for LNG helped the super-chilled fuel lead growth in North America in international gas trade during the quarter. The 1.03 Tcf of overseas cargoes topped the 1Q2021 total of 834.4 Bcf by 24%, DOE data showed.