Liquefied natural gas (LNG) tankers previously en route to Asia are still diverting toward Europe as the western part of the continent continues to deal with reduced pipeline flows and low storage inventories that have supported high prices. 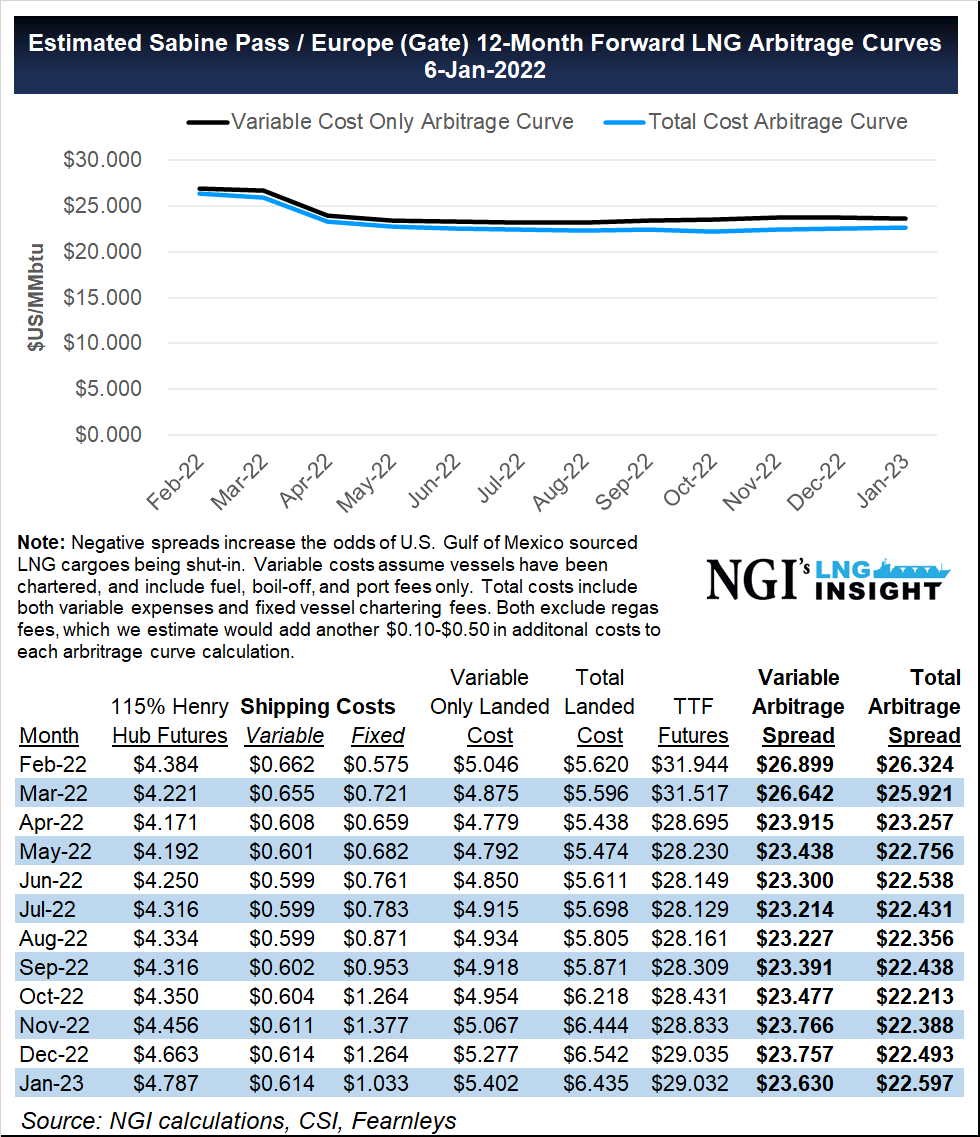 After diverted LNG vessels made headlines last month, market research firm Kpler has continued to track 14 more ships that have all changed course for Europe since prices there fell from record highs on Dec. 21.

Kpler analyst Laura Page said almost all of the ships – chiefly from the United States and West Africa – were originally destined for Northeast Asia, except for one headed for South America.

“…Prices have started to rise again due to lower Russian piped flows at the start of the year, so Europe is starting to come back into play,” Page told NGI. “Demand for LNG in Northeast Asia remains subdued and isn’t expected to strengthen unless temperatures fall.”

Page did allow that a continued coal export ban in Indonesia and recent snowfall in parts of Japan could potentially raise demand in Northeast Asia, but both conditions were expected to be short-lived.

As things stand now, Page said the spread between Asian and European prices was “quite finely balanced at the moment,” possibly leaving the direction of future ships up to the fluctuations of the next several days.

The February Japan-Korea Marker was leading the TTF February contract by almost $2, at $34.07 when it closed Thursday. Dutch futures dipped below $30 on Friday, while JKM spot prices were assessed near $33.

The arbitrage spread between the U.S. and Asia for February deliveries was also still favoring Asia on Thursday by $1.384, netting U.S. cargoes headed to the region $28.283/MMBtu, according to NGI data.

The weekly TTF average has declined two weeks in a row, the Energy Information Association reported Wednesday, but it started to pick up Tuesday, jumping more than $5 in four days.

In a new forecast from Maxar’s Weather Desk, Europe was expected to get warmer-than-normal temperatures through the next week and the number of heating days was reduced, but demand hasn’t been the only pressure pushing up prices.

Similar occurrences have been happening since at least November 2021, drawing accusations that Russia may be trying to create pressure for the approval of the Nord Stream 2 pipeline, but the country’s leadership has denied any political motivations.

European natural gas storage was at 55.84% on Wednesday (Jan. 5), almost 14% below the storage level during the same time in 2021, according to data from Gas Infrastructure Europe.

The 5-year average for European storage is 70% for this time of year.