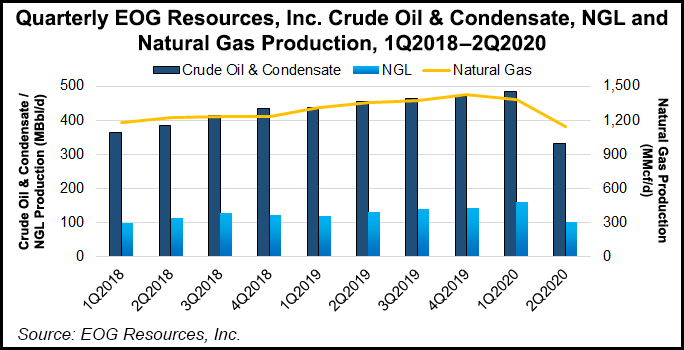 Weakened commodity prices and lower production volumes dragged EOG Resources Inc. into the red in the second quarter, as the super independent pulled back on drilling and slashed capital expenditures (capex) in response to the demand destruction created by the coronavirus pandemic.

The Houston-based company, which works in the Lower 48, Trinidad and China, said second quarter revenue plunged more than 80% from a year earlier to $1.1 billion. The company is a major onshore producer across multiple basins in the Lower 48, including the Denver-Julesburg and Permian basins, as well as the Eagle Ford Shale.

“We made the decision to shut-in existing production and defer new wells rather than sell into an uncertain and low-price market,” COO Billy Helms said during the quarterly earnings call Friday (Aug 7). “Our intent was that our lowest activity levels…would coincide with the lowest point of the commodity price curve.”

Net crude volumes associated with the shut-ins peaked at about 107,000 b/d in May, with an average of 73,000 b/d shut-in during the quarter. EOG started returning shut-in volumes to production in June, however.

Most shut-in wells are likely to begin producing by the end of September, but an estimated 25,000 b/d, on average, is to be curtailed throughout the third quarter.

West Texas Intermediate oil prices have recently hovered around $40/bbl. At that level, management said it can afford to continue to ramp up volumes and position for stronger prices and bottom-line results going into 2021.

That noted, “we now expect we will be able to maintain higher volumes for the same capital and cover both capital and the dividend with cash flow at less than $40 oil,” CEO Bill Thomas said. “Our improvements in volume coupled with reductions and well and operating costs are setting us up for strong performance next year.”

Thomas later added that the pandemic’s duration and impact on economic conditions — and the effects on oil prices — remain wildcards.

“Obviously, we need to keep our eye on the macro view of oil. We need to be aware of the market conditions,” he said. “We’re not interested in growing all volumes at a strong pace” into an oversupplied market. “Certainly, that’s not the right thing to do, but we want to continue, when the time is right, to grow the company at a disciplined pace — at a pace to where we can continue to improve our returns and improve our performance.”

The company said it successfully reduced capex and operating costs while improving its margins per barrel produced, generating free cash flow to help bridge the gulf to economic recovery.

“Our dramatically reduced activity and the temporary shut-ins…combined with the expense reductions generated positive net cash flow and deferred a large amount of production into a higher price quarter,” Helms said.

Total operating costs were $1.56 billion for the second quarter, down from $2.08 billion in the first quarter. Lease and well costs, down 8% on a per-unit basis, were the largest contributor to the reduction. The company is targeting a 12% decline in well costs in 2020.

EOG reported total expenditures of $534 million in the second quarter, including $479 million of capex — before acquisitions, noncash transactions and asset retirement costs — resulting in $194 million of free cash flow. EOG had guided for $3.4-3.6 billion in full-year capex, down nearly 50% from its plan at the start of 2020.

“One of the hallmarks of EOG is striving for continuous improvements, but the downturn brought a new intensity to this effort,” Helms said.

The company said total debt outstanding at the end of June was $5.7 billion. The debt-to-total capitalization ratio was 22%.