Propelled by its U.S. onshore crude oil and liquids output, EOG Resources Inc. reported better-than-expected profits for the third quarter. Investors in return sent the stock price up 4.37% on Tuesday. 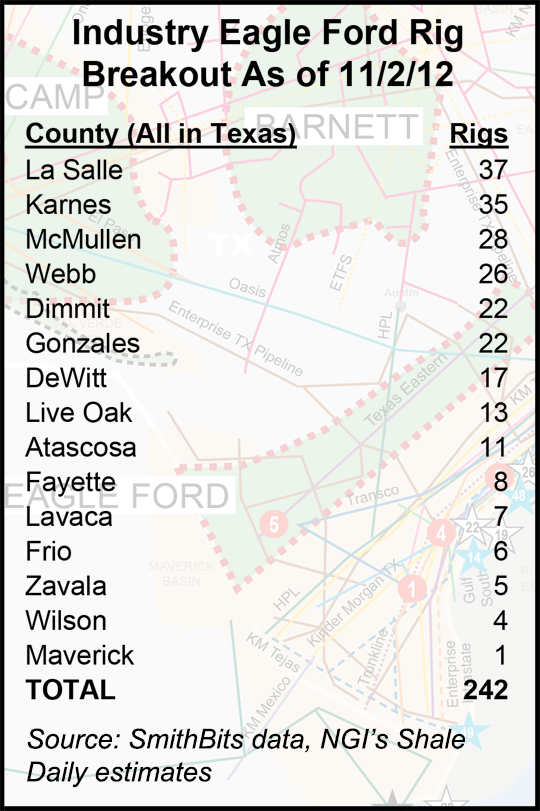 The Houston-based explorer generated continued momentum from wells drilled in the Eagle Ford and Bakken/Three Forks formations, realizing premium crude oil prices for volumes in both plays. The latest results led the company to increase the 2012 production growth target to 10.6% from 9%.

Compared with 3Q2011, EOG achieved a 42% increase in crude oil and condensate production, as well as a 40% jump in total liquids output. Total crude oil production, which grew 45% from a year ago, now is expected to be up 40% in 2012, 3% more than an earlier forecast. Total liquids growth was raised to 38%, compared with a previous forecast of 35%.

“Simply put, EOG’s excellent third quarter performance reflects the success of our groundwork,” said Papa. “Over the last few years, we captured the best crude oil acreage in the United States. Now we are executing a development program that has exceeded our initial expectations.

In the South Texas Eagle Ford play several “monster” well results stood out, he said. “In the Eagle Ford play, again the biggest driver was oil outperformance as it has been all year. We’re the largest crude oil player in the play, with production at 75% oil and 13% NGLs.

“In August I may have caused a flurry of comments because I said we had completed 15 monster wells as I defined them at 2,500-4,800 b/d of oil and rich-gas NGLs. In the third quarter we had 12 additional monster wells.” EOG has “drilled and flow-tested multi-well targets, and we expect to have some spacing conclusions in the first half of 2013.”

The company today is running 20 rigs in the Eagle Ford, but it is slowly ramping down on rigs and completion crews in part to keep capital expenditures “within budget,” said Papa.

According to SmithBits data and NGI‘s Shale Daily calculations, there were 242 rigs in operation in the Eagle Ford Shale as of Nov. 2. La Salle, Karnes and McMullen counties in Texas were the busiest with 37 rigs, 35 rigs and 28 rigs, respectively.

Across the United States EOG’s rig count has fallen to 52 rigs from 70 in the first six months of this year. “The primary reason is we expect liquids production to be down,” said Papa. “Our year/year growth is plenty strong for a company of our size.”

EOG focused its 3Q2012 North Dakota drilling activity in the core of its Bakken leasehold, as well as the Antelope extension, an area 25 miles southwest of the core of the play, said Papa. The producer also had “favorable” ongoing results from its Leonard and Wolfcamp activities in the West Texas and southeast New Mexico Permian Basin; the CEO is more positive about the the Leonard Shale than the Wolfcamp, based on early well results. Positive liquids results also were reported in EOG’s Barnett Shale “combo” play.

Until four years ago, EOG had been natural gas-long in North America. However, “very minimal” gas drilling activity is planned in the coming year. “We’ve shrunk North American gas production for four straight years because it’s a money loser…it’s unprofitable,” he told analysts. “We expect natural gas prices in 2013 will be better than 2012, but not good enough to provide a full-cycle return on gas well drilling.”

This year EOG spent about $700 million in gassy onshore plays that included the Haynesville, Barnett and Marcellus shales to convert some of its leasehold to held by production. In 2013, only $100 million is slated to be spent on dry gas drilling.

The shift in capital spending from dry gas plays “will also lift our total rate of return,” Papa said. “These trends are similar to the past several years…because we are becoming a bigger oil company.” NGL production also is forecast to be lower in 2013 based on pricing forecasts.

However, the next year should see funding for some “greenfield oil ideas and concepts” in North America’s onshore, said the CEO.