Dallas-based EnLink Midstream LLC expects declining flows on its Oklahoma facilities to “moderate significantly” in the near term as producer activity picks up amid improving oil and natural gas prices. 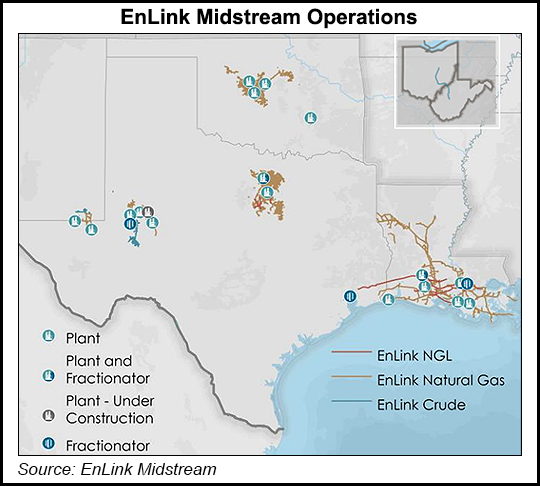 COO Ben Lamb said on EnLink’s 2Q2021 earnings call that rig activity doubled on the company’s dedicated acreage in Oklahoma during the second quarter as commodity prices rose. There are currently seven rigs operating in the company’s footprint  from “four or five” different exploration and production (E&P) operators, he added.

That includes a two-rig program being carried out by a joint venture of Devon Energy Corp. and Dow Inc.  Lamb said the first volumes from the JV are expected to hit EnLink’s system in the third quarter, “but it will be more significant in the fourth quarter.” Devon sold its stakes in EnLink in 2018.

The remaining rigs are working for mostly private E&Ps, he added.

“We’re at a point where we now see 2022 declines significantly moderating to be in the mid-single digits versus 2021 volumes,” Lamb said. The company had previously projected high single-digit declines.

“We don’t even need the seven rigs to persist to get to the mid-single-digit decline in 2022,” he added. “What we’re seeing right now is a very nice, helpful tailwind. And if a rig count of seven sticks, so to speak, then we would see upside from what we’re talking about today.”

While EnLink grapples with declines in Oklahoma, it is looking to the prolific Permian Basin for growth. Increasing E&P activity in both the Midland and Delaware sub-basins is resulting in higher volumes on EnLink’s assets, the company said.

In the Delaware, the company plans to restart the idled 240 MMcf/d Tiger processing plant next year as activity driven by ExxonMobil and other players in the area ramps up. The plant was taken offline last year but EnLink has said it would restart when there was a “sustained need” for additional processing capacity.

“Certainly, we do have updated plans from Exxon that support the restart of the Tiger plant early next year but it’s not just Exxon,” Lamb said. “We have a fairly diverse book of business in the Delaware, and in addition to Exxon, one of our other large independent public producers is accelerating their activity on our dedicated acreage. So that, along with Exxon, along with some other activity from smaller producers, is what’s leading to the restart of the Tiger plant.”

Lamb also said the Midland sub-basin in West Texas “continues to be our strongest basin overall” with 17 or 18 rigs working on dedicated acreage currently.

In the Midland, the company plans to add capacity through the relocation of a 95 MMcf/d processing plant from Oklahoma. EnLink expects to bring the project in service by the end of September, with full capacity available in the fourth quarter.

Another plant relocation could be in the cards next year. EnLink expects to have around 670 MMcf/d of cryogenic capacity online by the end of 2021, but that is likely to fill “fairly quickly” in the first half of 2022.

“So we are already looking at efficient ways to increase processing capacity. That could include offloading to others because there are others who are constructing facilities in the Midland Basin today. It could include moving another plant,” Lamb said. “And we do have a couple of candidates in our portfolio that could be available for that.”

He also said EnLink was looking at potential JVs with other Midland midstreamers
“to make sure that we fully utilize the capacity that someone builds.” The company is also considering expanding a 20 MMcf/d refrigeration plant acquired as part of the recent Amarillo Rattler transaction.

The Permian segment booked a profit of $44 million compared with $34 million last year.

The EnLink team also expanded on previously announced plans to lower its carbon footprint and develop carbon capture and sequestration (CCS) projects on the Gulf Coast. The plans include repurposing some of its infrastructure in Louisiana, to transport carbon dioxide (CO2) to be sequestered.

Lamb said the size of the market opportunity in CCS in the Mississippi River Corridor, where Enlink’s infrastructure “is the most robust,” amounts to between 80 and 100 million metric tons/year of total CO2 emissions.

“We have assets of sufficient diameter that we can operate at the pressures required to move CO2 efficiently and move a quantity of material and move a distance that we think fits the market as we expect it to develop in the next few years,” he said.

EnLink delivered $71.5 million of free cash flow after distributions in 2Q2021 resulting from “strong operational results and timing” of capital expenditures, The company spent $57.8 million on capital projects in the quarter, the bulk of which went to the Permian.