The United States gained three drilling rigs for the week ending Friday (Aug. 6), all working in the Lower 48, according to Baker Hughes Co. (BKR). 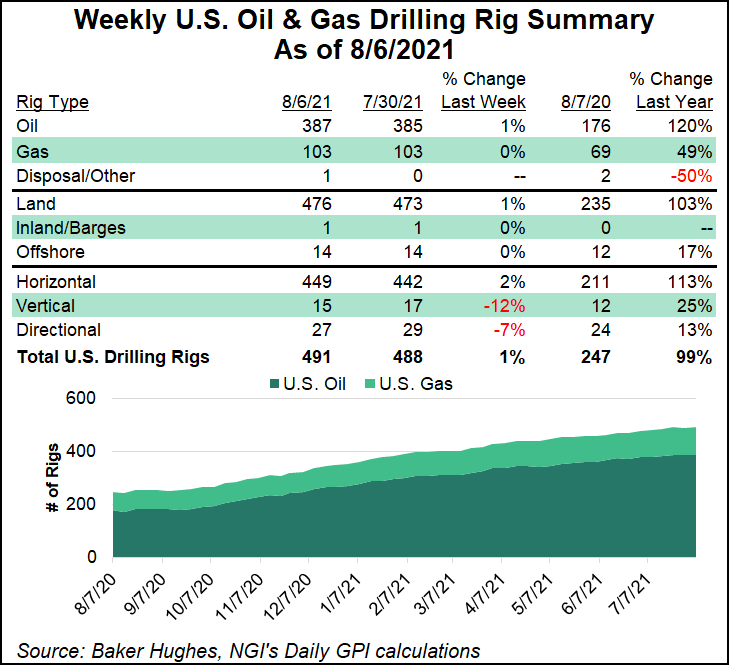 There were 491 active rigs total in the U.S. onshore and Gulf of Mexico (GOM), compared with 247 for the same period of 2020. The weekly rig tally is compiled by BKR with data from Enverus.

According to BKR, the United States raised two oil rigs and one miscellaneous rig in the onshore. There were 387 oil rigs working, versus 176 a year ago. The domestic natural gas rig count was static for the week at 103, versus 69 a year ago. The GOM rig count also was flat at 14.

Canada added three rigs for the week, with 156 total in operation from 47 a year ago.

In total, North America’s rig count ended the week at 647, compared with 294 in the year-ago week.

By region, New Mexico gained one rig for the week, with 75 total in operation, according to BKR. Oklahoma also raised another rig to put its count at 31. Wyoming saw three rigs added to its count, to end the week at 16.

Texas, meanwhile, dropped one rig from a week earlier but the overall count still surpassed all plays at 229. California also lost one rig; it had five in operation as of Friday.

The Permian was the basin leader, with 243 rigs total, up from 122 a year ago. Meanwhile, the gassy Haynesville Shale had 47 in operation, which is 32 more year/year. The Marcellus Shale’s count was at 29, compared with 25 in the year-ago period.

Oilier basins with double-digit rigs in operation were led by the Eagle Ford Shale, which had 32 rigs working as of Friday from 11 in the year-ago week. The Williston Basin had 19 rigs in operation, compared with 11 a year earlier. Oklahoma’s Cana Woodford was at 17 versus six a year ago, while Colorado’s Denver-Julesburg/Niobrara reported 12 rigs at work, from four year/year.

​​Domestic oil production averaged 11.2 million b/d for the last week of July, flat week/week, according to the U.S. Energy Information Administration. That compares to the early 2020 peak of 13.1 million b/d, reached before the pandemic crushed demand.