Dallas-based EnLink Midstream LLC has increased its earnings guidance for 2021 amid strengthening natural gas and oil prices, with an eye on expanding operations and lowering carbon emissions. 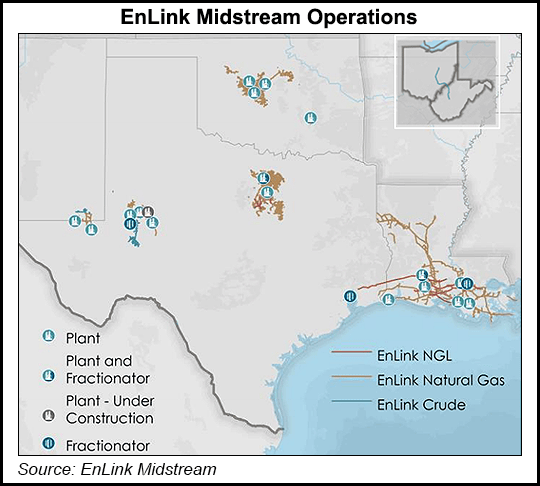 “We are pursuing exciting growth opportunities in the Permian and Louisiana, as well as experiencing improved activity in Oklahoma and North Texas,” CEO Barry E. Davis said. “Coupled with our commitment to capital efficiency and execution excellence, these opportunities have resulted in a substantial increase” to expected free cash flow (FCF) and profits.

EnLink also is continuing to “benefit from a supportive commodity price environment and a ramp-up of producer activity,” Davis noted.

In the first three months, the Permian segment had “robust producer activity,” particularly in the Midland sub-basin of West Texas. Gas gathering and transportation volumes from the Permian unit jumped 12%-plus in March from volumes reported in December and in January.

At the end of April, EnLink purchased Amarillo Rattler, which has a natural gas gathering and processing (G&P) system in the Midland. In connection with the purchase, EnLink expanded its acreage dedication via a G&P agreement with Permian heavyweight Diamondback Energy Inc.

The big push overall has been in the Permian, where EnLink has systems running through the Midland and Delaware sub-basins. Last year the Tiger natural gas liquids (NGL) processing plant began serving Delaware operators.

In addition to the Permian, EnLink has midstream operations in Louisiana, North Texas and Oklahoma.

Based on the progress to date in all four segments, net income guidance for 2021 has increased by $60 million to $135 million at the midpoint. EnLink also expects to generate $350 million in FCF at the midpoint.

The midstreamer also has launched EnLink Carbon Solutions, a unit designed to help industrial customers reduce their carbon dioxide (CO2) emissions. Among other things, carbon capture, utilization and sequestration (CCUS) opportunities are on the board, beginning with Louisiana. EnLink “has the largest intrastate network in Louisiana, which connects us to industrial customers in one of the areas with the highest concentrations of CO2 emissions in the nation,” Davis said.

“We are uniquely positioned to launch CCUS ventures that will move EnLink and our industrial partners toward mutually beneficial decarbonization goals that support the global energy transition, while also driving value creation for EnLink and our unitholders.”

The new group is eyeing “CCUS synergies that align with EnLink’s extensive Louisiana footprint, which contains approximately 4,000 miles of pipeline and is connected to one of the nation’s largest concentrations of industrial CO2 emissions.”

The new business plans to “build upon longstanding customer relationships by developing carbon solutions service offerings that are mutually beneficial for EnLink, its customers, and the State of Louisiana.”

The midstreamer in early May set a goal to reduce methane emissions from 2020 levels by 30% in 2024. It also is eyeing a 30% reduction in total CO2 emissions in 2030 versus 2020 levels. The overall goal is to reach net-zero greenhouse gas emissions in 2050.

Among other things, EnLink plans to boost renewable energy use to power operations. In addition, plans are underway to convert natural gas-driven equipment, such as compressor engines, to run on electricity.

“The logical next question,” said Raymond James & Associates Inc. analysts, “is whether there is additional upside from here.”

EnLink may need further NGL uplift in the Midland sub-basin, “with propane being the most likely upside driver from here, in our view,” the Raymond James team said.

“While it would be somewhat surprising to see further volume gains manifest in 2021, additional tailwinds could develop for 2022 across the asset base,” particularly in the Permian Delaware assets at current West Texas Intermediate prices.

Tudor, Pickering, Holt & Co. (TPH) analysts noted EnLink’s “significantly better” contributions from the Texas assets, which were up 14% sequentially in 1Q2021. The Texas gains “partially offset a dramatic step down in Oklahoma natural gas earnings,” which slumped 47%. Oklahoma’s business unit suffered during 1Q2021 from lower G&P volumes related to Winter Storm Uri, losses from firm sales agreements and the expiration at the end of 2020 of minimum volume commitments by Devon Energy Corp. Devon, which initially launched EnLink, sold its stakes in 2018.