EnLink Midstream, the Devon Energy Corp.-controlled natural gas gathering and transportation partnership, is forecasting a ramp-up in Midcontinent volumes in anticipation of increased producer activity in the region in 2017. 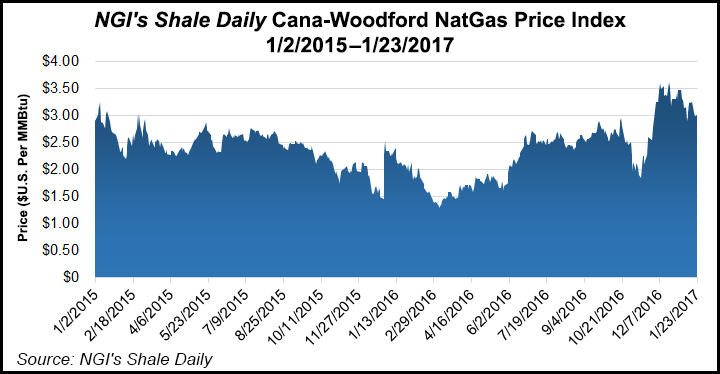 EnLink Midstream Partners LP (ENLK) and its general partner EnLink Midstream LLC (ENLC) said in a 2017 guidance and operations update Monday that the partnership’s 2017 volumes in Central Oklahoma are expected to increase 180% year/year on an exit rate to exit rate basis.

The Dallas, TX-based midstreamer continued to solidify its presence in the Midcontinent in 4Q2016. The partnership said it struck a deal with a Newfield Exploration Co. affiliate that will see a portion of Newfield’s acreage in the STACK (the Sooner Trend of the Anadarko Basin, mostly in Canadian and Kingfisher counties) dedicated to Enlink.

ENLK said it also formed Cedar Cove Midstream LLC during the fourth quarter, a joint venture with Kinder Morgan Inc.’s midstream segment that will focus on gas gathering and processing services in an area of mutual interest in Blaine County, OK. ENLK said it contributed $40 million in cash and other considerations during the quarter for a 30% interest in Cedar Cove’s gathering and processing assets.

In 2017, EnLink said it plans to add 400 MMcf/d of gas processing capacity at the Chisholm complex in Central Oklahoma. The previously announced Chisholm II plant should be operational by the second quarter, the partnership said, while the Chisholm III plant is expected to go into operation by year-end 2017. In total, the expansions will bring EnLink’s Central Oklahoma processing capacity to 1 Bcf/d, making it one of the largest gas processing providers in the STACK.

EnLink said its natural gas liquids (NGL) platform in Louisiana will benefit from the growth expected out of Central Oklahoma. Once online, the Chisholm II plant is projected to put out 20,000-30,000 b/d of NGLs, which would fill available capacity on the Cajun-Sibon pipeline and “spur additional growth in the region,” EnLink said.

Construction of the Ascension Pipeline, a joint venture with Marathon Petroleum Corp. in southeast Louisiana, is on track and the project is expected to be operational by 2Q2017, EnLink said.

Meanwhile, in the Permian Basin, EnLink said it will be expanding crude oil gathering in the Midland sub-basin in Upton and Midland counties through its Greater Chickadee gathering system, slated to come online during the first quarter. The system will have a capacity of 100,000 b/d.

On the natural gas side, EnLink’s system in the Midland completed an expansion in 2016 to add 30-40% capacity that is expected to support growth in the play as activity increases in 2017. The midstreamer said it has infrastructure in place to support another 100 MMcf/d at its Riptide facility as volumes continue to grow.

In the Delaware sub-basin, EnLink said it plans to focus on “executing a large inventory of organic projects during the upcoming year” to expand gas gathering and processing, including the Lobo II facility, which is expected to add 60 MMcf/d in 2017.

“In 2017, we continue to focus on executing our strategic growth plan,” CEO Barry E. Davis said. “Our assets are strategically positioned in top U.S. basins where we’re experiencing strong producer activity and, as a result, are further expanding our operational reach and service offerings to meet increasing demand.”

Growth capital expenditures (capex) funded solely by ENLK are forecast to range from $505-$645 million in 2017, with total growth capex (including contributions from joint ventures and ENLC) expected to range from $590-$750 million.